Pakistan Survival Kit: Lessons for the Military and the Minorities

Pakistani Muslim and non-Muslim minorities are struggling to stay alive in a country which is speeding towards ethno-religious genocide. They are dying on daily basis; some in bomb blasts and others during target killing incidents. Tens of thousands among the minorities are currently displaced who have lost their homes, honour, jobs and security. The Baloch are most vulnerable, as they are currently dealing with the fourth military operation causing unprecedented deaths and mass evictions. The children and women of these minority groups are most vulnerable to the long term damage from disruption in education and social fabric. Those able are fleeing the country en mass. They are facing a crisis on the scale faced by the refugees during the partition of India in 1947. The voices among the intelligentsia who support the rights of the minorities as equal citizens have been either silenced or made irrelevant. 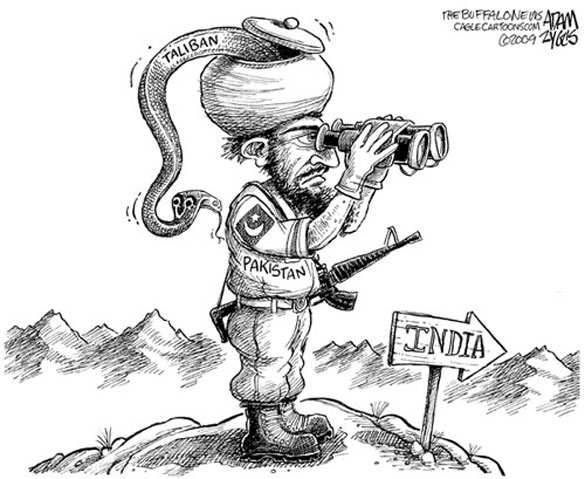 As the minorities have lost hope in the civilian administration, some among them like the Shias and Ahmadis look towards the military for protection and justice and expect a cleanup operation against their killers. They blame the extremist Takfiris affiliated with Taliban, Jamat-e-Islami, Jamiat Ulema Islam, Lashkar-e-Jhangvi and Jundullah for their woes.

As in the past, their demands are futile. They are misreading the nature of the relationship which the military has developed with the religious groups and terrorists over the past few decades. The victims of terrorism lack awareness of the political interests and global ambitions of the Pakistani establishment and therefore harbor unrealistic expectations of the military. A recent article in Dawn connects the source of funding and weapons for both the Pakistani and the Afghan terrorists. While the militant groups get the real bucks and immunity, the Shias and minorities have to resort to the lip service and false assurances. To their dismay, the judiciary has failed to prosecute the arrested Shia killers, and police have also been found complicit engineering jail-break incidents and allowing the militants to escape and roam free with impunity.

SOMEWHERE IN WAZIRISTAN: The Afghan Taliban are financially supporting the Pakistani militants and providing sanctuary to them in Afghanistan, spokesman for the Pakistani Taliban has said.

The disclosure, which the spokesman made on Saturday in an interview with a small group of reporters, is meaningful because Pakistan has long been accused of pursuing a policy of differentiating between the Afghan and Pakistan Taliban as so-called ‘good’ and ‘bad’ militants --- even though Islamabad denies this.

“The Afghan Taliban are our jihadi brothers,” said Shahidullah Shahid in an interview in Waziristan, the Taliban’s main tribal sanctuary in Pakistan along the Afghan border.

“In the beginning, we were helping them, but now they are strong enough and they don’t need our help, but they are now supporting us financially.”

The Pakistani Taliban have financed many of their attacks through a combination of kidnapping for ransom cases, extortion and bank robberies. But Shahid’s comments indicate these sources of financing do not always provide the funds they need.

Shahid reiterated the Taliban’s view that peace talks would not succeed unless the government released all militant prisoners and withdrew the army from the tribal region. He also demanded an end to US drone strikes targeting militants in the tribal region.

“Yes, we are terrorists, but we are against the system of the infidels,” said Shahid. “We will fight up to our last drop of blood to impose Sharia (Islamic) law in the country.”

The interview took place in a guestroom attached to a mud house. The Taliban requested that the reporters refrain from revealing exactly where in Waziristan the house was located.

Shahid arrived at the house surrounded by bodyguards in a vehicle with tinted windows. He wore white Shalwar Kameez and a green army jacket. One of the pockets contained a grenade.

After the interview, the reporters were served a meal of beef curry, rice, fruit and cold Pepsi and Mountain Dew.—AP

Pakistan October 6, 2013 (AP), A bomb exploded next to a van carrying Pakistani security guards tasked with protecting workers involved in an anti-polio drive in the country's northwest on Monday, killing two people, according to officials.

The attack was the latest incident of violence against the government- and U.N.-backed effort to eradicate polio from Pakistan.

The bomb killed a police officer and a member of a volunteer peace committee, said senior superintendent of police operations for Peshawar district, Najeeb ur-Rehman. Police initially reported that six people died but ur-Rehman said that figure was later revised to two.

The attack happened in the village of Malikhel, about 20 kilometers (12 miles) outside the provincial capital of Peshawar. The victims were supposed to be protecting workers administering anti-polio vaccine to local residents.

In 2011, Pakistan had 198 confirmed polio cases, the highest number of any nation in the world. It was able to bring that number down to 58 in 2012 through an aggressive vaccination program.

But the success has come at a steep cost.

Militants who oppose the vaccinations often target workers delivering the vaccine and threaten people who want to get their kids vaccinated.

Two powerful Pakistani Taliban militants have banned vaccinators from two tribal regions in the country's northwest, North and South Waziristan, over roughly the past year because of their opposition to U.S. drone strikes.

Militants claim the vaccine is meant to sterilize Muslim children and accuse health workers of being U.S. spies. The allegation gained traction after the CIA used a Pakistani doctor to try to confirm the presence of Osama bin Laden in 2011 under the guise of an immunization program.

Many suspect the Taliban of carrying out the murders, although the group has denied the allegation.

Although the military projects an image of concern for the victims, the reality is a simultaneous and continued patronage of extremists who target both ethnic and religious minorities. A recent article in Dawn connects the source of funding and weapons for both the Pakistani and Afghan Taliban terrorists. While the militant groups get the real bucks and immunity, the minorities have to resort to lip service and false assurances. To their dismay, the judiciary has failed to prosecute the arrested terrorists, and police have also been found complicit engineering jail-break incidents and allowing the militants to escape and roam free with impunity. The media remains dishonest and colludes with the military in confusing the Pakistanis and the international community about the enemy they are dealing with. While covering the identity by compartmentalizing the perpetrators into good and bad Taliban, the media and some politicians are encouraging negotiations with the terrorists which will only give them more room to dictate national policies.

Over decades, the military has invested millions of dollars to support these terrorists whom they have branded as ‘our boys’. In comparison to the minorities, the terrorists have served the strategic interests of Pakistan and hence remain irreplaceable. In a cost benefit equation, they are far more useful to the Pakistani army against India and Afghanistan to justify the socio-economic and political inconvenience they create for the Christians, Sufi Sunnis, Ahmadis, Baloch, Hindus or the Shias. Military has permitted these terrorists to establish camps and hide outs in different parts of the country and many among them also assist the army in their combats with secular Baloch and Sindhis. It is almost as if the terrorists, preparing for an imminent battle with Pakistan’s neighbors, are using the minorities for target practice.

So far, the Army has opposed a military operation in North Waziristan, the permanent safe haven of the Taliban, despite pressure from the international community. Further, the military looks the other way as Taliban make a comeback in Swat valley and areas adjacent to the disputed regions of Gilgit-Baltistan and Chitral. There has been a steady flow of the terrorists to the rugged mountain sanctuaries of Gilgit Baltistan, especially those who feel vulnerable in the tribal areas. Every day, local newspapers in Gilgit-Baltistan report on the presence of Taliban training camps without resultant government response. The previous police chiefs of Gilgit-Baltistan, Sarmad Khan and Hussain Asghar failed to initiate operation against the Shia killers claiming a lack of permission from Islamabad. It took the murder of the Chinese tourists last month to finally initiate a search operation in Gilgit-Baltistan, which has a bitter lesson for the Shias and other minorities: thousands of their dead ones do not equal one dead Chinese.

There are lessons to be learnt for the military as well. The country cannot evolve and progress as a pluralistic democracy until the military establishment renounces patronage of Takfiri terrorists. It is essential for the survival of the country to renew the social contract among different linguistic, religious and racial communities and ensure equal rights and security.