Pseudo-secular politicians had been scaring Muslims for long of a saffronised India under Mr. Narendra Modi. Even figures like 22, 000 Muslims will be killed in that scenario were bandied about. [How was the calculation made is, of course, anybody's guess.] However, a quick survey of Delhi's Urdu Press, the only barometer of Muslim opinion in the country available, reveals  that barring Shahi Imam's statement published in Mr. Aziz Burney's Azizul Hind daily, and the newspaper itself and a few columnists, no Urdu newspaper is engaged in scare-mongering. No dire predictions are being made. All have accepted the verdict of the people and say in a democracy the people's verdict should be always accepted and welcomed as it reflects the collective wisdom of the people. All editorial writers are asking Muslims to wait and watch for the promised good times. 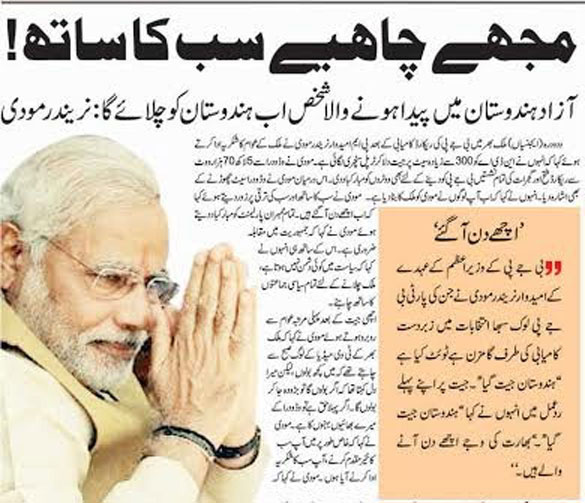 Indeed, some Urdu newspapers have even taken positive note of PM-designate Mr. Modi's remarks in his victory speech that he would carry every one with him. 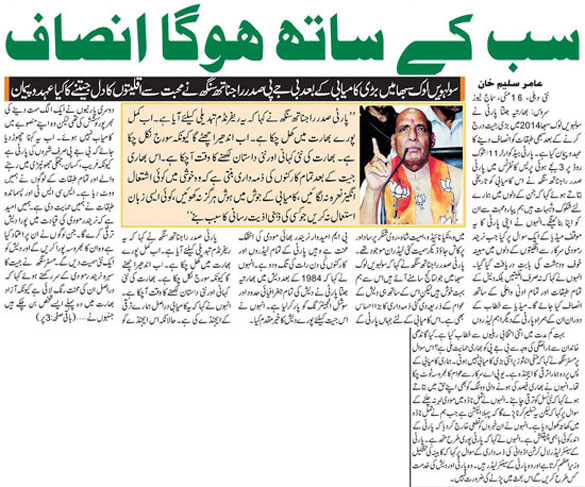 Also displayed prominently is BJP President Rajnath Singh's repeated advice to party workers that no remarks should be made against any community (read Muslims) in victory celebrations.

Azizul Hind has also displayed prominently Shahi Imam of Jama Masjid Delhi's statement that the Mr. Modi's victory is "dangerous" for the country unless BJP changes its policies. Divisive politics cannot help the country. It will be very dangerous for the country, If the BJP implements its own policies rather than follows the Indian constitution, he is quoted as having said.

The lone exception is Mr. Aziz Burney's Azizul Hind. Mr. Burney is a prominent Urdu journalist and was the founding editor of largest circulated Urdu daily Rashtriya Sahara for over two decades. Azizul Hind is his new venture and today's paper is the 337th day of its publication. His newspaper has come out with a black cover page. Apparently May 16, 2014 was a black day for him. 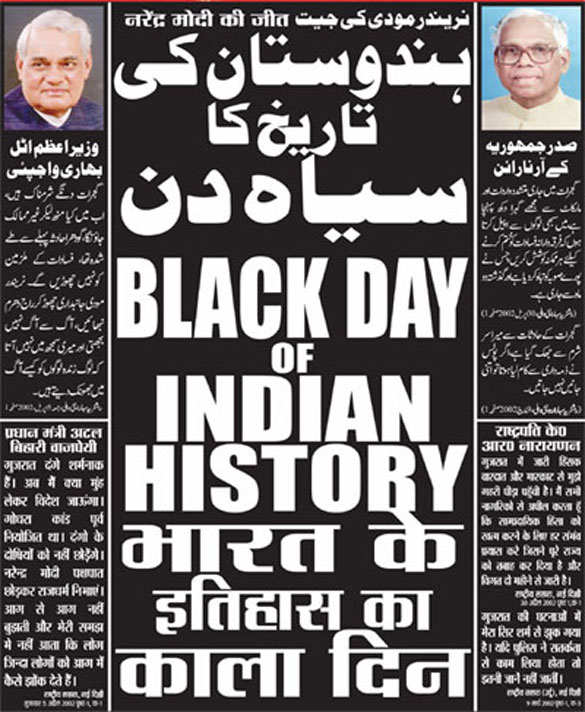 The Headline says it all: Narendra Modi's Victory: Black Day of Indian History. On the right panel is a quote from the former President K R Narayanan. It reads: I am deeply saddened by the continuing violence in Gujarat. I appeal to all people to make all efforts to end the communal violence that has destroyed the entire state and is continuing for the last two months. (Rashtriya Sahara, New Delhi, 9 March 2002, Page 1).

On the left panel is a quote from former, first and only BJP Prime Minister so far, Mr. Atal Bihari Vajpayee: "Communal violence in Gujarat is shameful. What face will I show to the world. Godhra violence was pre-planned. Perpetrators of violence will not be forgiven. Narendra Modi should leave partiality and follow Rajdharma (moral duty of governance). Fire cannot be fought with fire. I cannot understand how people can throw living people into burning fire." (Rashtriya Sahara, New Delhi, 5 April 2002, Page 1).

Azizul Hind's editorial is headlined: Secularism in Danger. It says: "The person who is considered responsible for the genocide of Muslims is going to be the prime minister of India. It is possible that some changes are made in the country's policies. It is a reality that minorities are scared of Modi and that his policies have always been anti-Muslim. Regardless of what Narendra Modi says about doing this or that for Muslims in future, the fact remains that a person who has grown in the lap of RSS cannot be neutral towards Muslims and Islam. The very basis of RSS philosophy is anti-Islamic and its objective is the establishment of a Hindu Rashtra (India as a Hindu Nation). ... In this scenario, RSS and its prime ministerial candidate Narendra Modi cannot think of doing any good for Muslims. Indeed, RSS ideology does not have a soft corner even for followers of Christianity and other religions. ...."

A prominent Muslim journalist Zafar Agha's column in Hamara Samaj bemoans the ineffectiveness of Muslim vote bank. He concludes his column in Hamara Samaj: "The result will be that secular politics in India will suffer unimaginable harm. Obviously this will hurt Muslims most. election results have decided that at least for the next two decades Indian politics will move in the direction of Hindutva, that is, Hindu nationalism, and Modi will dominate Indian politics for a long time. Muslims will have to face its worst consequences. Sadly there is no Muslim leadership that can guide the Muslims in this critical moment. If there are any leaders among Muslims they are no different from Meer Jafar and Meer Sadiq (synonyms for traitors). So not only one sees a dark period ahead for Muslims, but one sees Modi heralding the darkest period in the history of Indian Muslims."

Mercifully, this is an exception. The only other newspaper that considers Mr. Modi's victory as the victory of communalism is Hindustan Express. It has published a column by Mr. Shahidul Islam headlined: Finally, Communalism Wins. But this article as well as its own editorial is largely non-committal. They take note of RSS's great contribution to Mr. Modi's victory but also put the blame for Congress's debacle on its own incompetence, lack of job opportunities and price rise, etc.  No attempt is made of scaring Muslims about the days ahead. The editorial is titled simply: Unexpected victory. 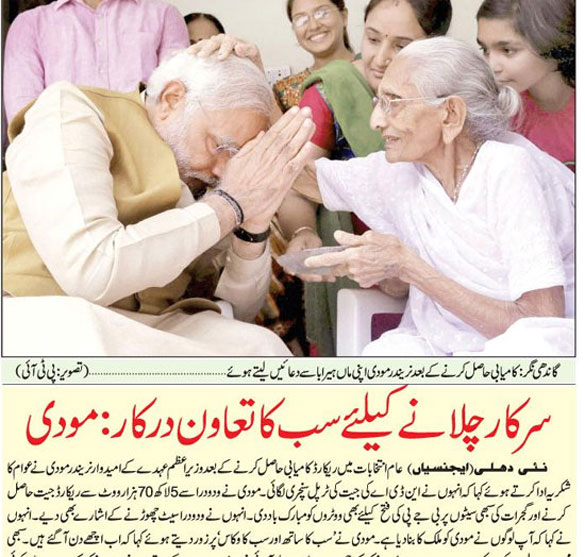 Surprisingly the most balanced editorial is by Roznama Rashtriya Sahara which was nurtured from its beginning and for so long by a dangerous radical extremist like Mr. Aziz Burney whose new paper calls Modi's victory a Black Day for India. It says: We Respect People's Verdict. It says: "Since popular verdicts are a result of the collective wisdom of the people, they should be welcomed. This is the demand of the democratic principles as well. ... It will be premature to say how the new BJP government will behave, what attitudes it will display, what decisions it will take. .... In any case the government will be given time to reveal its policies and its attitudes. People are looking towards it with fear and expectations."