Massive Fire at Rohingya Refugee Camps in Bangladesh: Sabotage or 'inside job'? 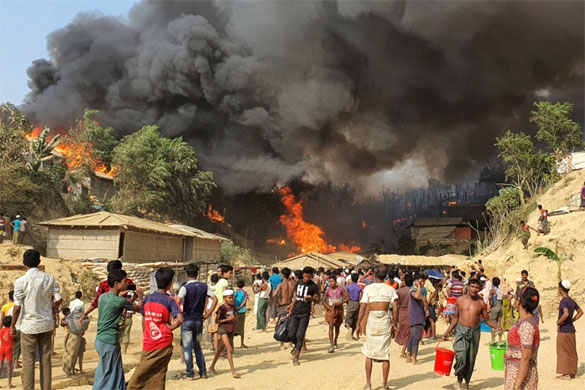 There seems to be no end to the miseries of the Rohingya refugees living in Bangladesh since 2017. A devastating fire that broke out in one of the homes in Cox Bazar's Balukhali Refugee camp on Tuesday afternoon killed at least 15 people including 6 children and gutted 17000 homes rendering about 45,000 refugee shelters. 400 people have been injured and another 400 have been missing. The refugees have taken shelter in Cox Bazar and Teknaf hills and forests. They are being taken to safe places. Search for the missing people is on.

The administration says the fire may have broken out due to a gas cylinder but some refugees say that the fire was pre-planned and was the work of Rohingya extremists who did not want the transportation of Rohingyas to Bhasanchar Island. 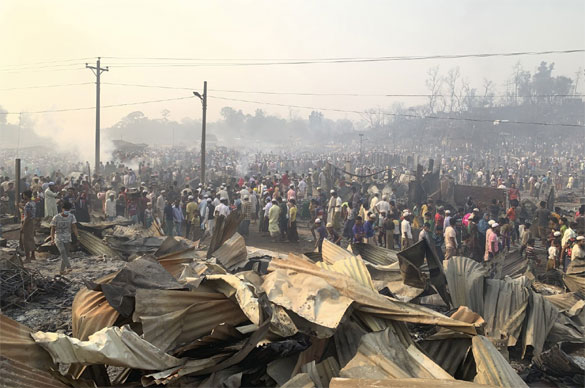 This fire is devastating but it is not the first incident of fire breaking out in Cox Bazar Refugee camps. Two incidents of fire have already happened in January this year. Tuesday's fire was the third in four days. This raises doubts as frequent fires in refugee camps cannot be a coincident. These fires have occured after the process of transportation of refugees to Bhasanchar island began.

The Rohingya extremist organisations, particularly the ARSA had been conducting targetted killing, abductions and arson in the Cox Bazar camps. Clashes between rival drug mafia groups also resulted in murders and abductions. They also ran extortion racket. But in Bhasanchar, these extremist gangs cannot enter and run extortion rackets or jihadi propaganda. That's why the Rohingyas living in Bhasanchar are feeling safe and relieved in the absence of these extremists and drug mafia. Therefore, the drug mafia and jihadi groups would be the last to compel them to go to Bhasanchar.

The UNHRC is also perturbed by the frequent occurrence of fires in the refugee camps. The reports of committees that investigated the previous fires have not come out. This also raises doubts on the intentions of the Bangladesh government.

Bangladesh government sent representatives of NGOs of Bangladesh who gave a clean chit to the government. After that some Rohingyas agreed to relocate. Still a majority of them don't want to relocate to Bhasanchar due to many reasons. They want to remain in the mainland despite hardships and problems.

The UNHRC should take serious note of the frequent fires in Cox Bazar refugee camps and conduct its own investigation into the causes of the fires. The world should know if the fire was an accident, a terrorist act or an 'inside job' to compel refugees to relocate to Bhasanchar against their wish?.