Permission to fight is given to those against whom war is made, because they have been wronged — and Allah indeed has power to help them — Those who have been driven out from their homes unjustly only because they said, ‘Our Lord is Allah’ — And if Allah did not repel some men by means of others, there would surely have been pulled down cloisters and churches and synagogues and mosques, wherein the name of Allah is oft commemorated. And Allah will surely help one who helps Him. Allah is indeed Powerful, Mighty. (Al Quran 22:40-41)

New Egypt’s charter enshrines the rights of citizenship and equality for every Egyptian, Muslims and Copts, said Pope Tawadros II of Alexandria and Patriarch of the See of St Mark yesterday. 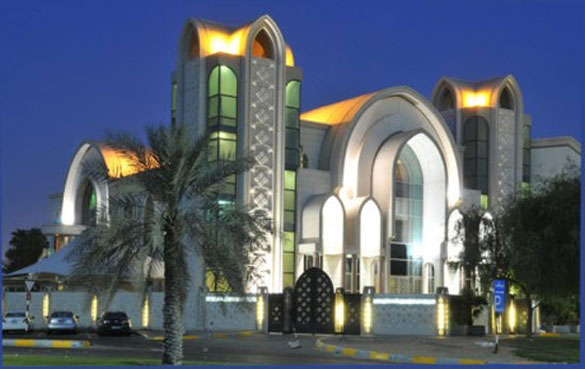 A Coptic Church in Abu Dhabi

Pope Tawadros II, Pope of Alexandria, is seen receiving a memento from Ehab Hamouda, Egyptian Ambassador to UAE, during his press conference in Abu Dhabi on Tuesday.

Dismissing persecution of Coptic Christians in Egypt, Pope Tawadros II told a news conference held in Abu Dhabi, as neighbours at home, partners at work, friends in schools and colleges, Muslims and Christians have been living in harmony for more than 14 centuries. “But some problems between Copts and Muslims pop up from time to time. The new constitution will help solve these problems, so that justice and peace prevail,” the Coptic Pope said, winding up a several days visit to the UAE.

The visit by the Pope, which began Friday upon invitation from President His Highness Shaikh Khalifa Bin Zayed Al NAhyan is also a gesture of recognition for the country’s support for Egypt in its current political transition.

Pope Tawadros hailed the UAE’s stand under the wise leadership of President His Highness Shaikh Khalifa Bin Zayed Al Nahyan in backing the Egyptian people after the June 30 revolution.

“I’ve come to give thanks to the UAE, Their Highnesses, the government and the people of the UAE for the strong support they provide to Egypt during these days,” Pope Tawadros said.

He stressed that his visit to the UAE projects the fondness between the people of the two countries.

He added that Shaikh Khalifa is walking the same road and with the same values as the late Shaikh Zayed Bin Sultan Al Nahyan.

The UAE was among Gulf states that backed changes in Egypt last summer and pledged billions of dollars in aid packages to Cairo in a bid to shore up its flagging economy.

On Sunday, Pope Tawadros inaugurated the altar in Mar Mina Church, located in the port town of Jebel Ali, and led the church service.

Pope Tawadros II urged Egyptians to vote in upcoming presidential elections, due to begin Thursday for Egyptians living abroad. Elections will start back home on May 26-27.