It was perhaps no coincidence that on September 4, an imam at Mecca’s Grand Mosque dwelt on Prophet Mohammed’s kindness to a Jewish neighbour. The reference, days before the United Arab Emirates (UAE) and Bahrain signed agreements on September 15 to normalise ties with Israel, was seen as part of the groundwork for other Arab nations such as Saudi Arabia to follow suit. The thaw in Arab-Israel relations is a culmination of years of behind-the-scenes work that Arab leaders have been hinting at. Saudi Arabia’s Crown Prince Mohammed bin Salman, in 2018, backed the Israelis’ “right to have their own land”. Bahrain defended Israeli airstrikes in Syria the same year, saying Israel “has the right to defend itself”. A year later, Bahraini foreign minister Khalid bin Ahmed Al Khalifa called Israel a part of the region’s heritage. 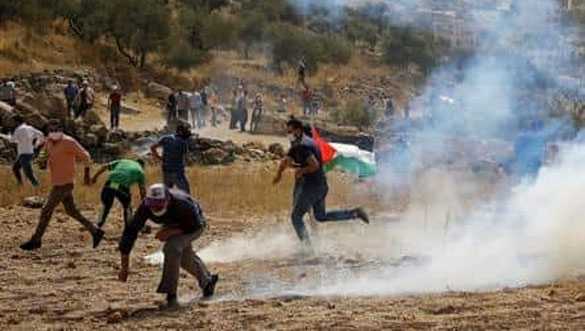 The euphoria over the normalisation of Israel’s ties with its neighbours should not take the focus away from the need for Israel to end its policies of dispossessing Palestinians. This is the only way to ensure a durable peace in the region (REUTERS)

Bin Salman and Khalifa’s sentiments sound extraordinary given how the expulsion of hundreds of thousands of Palestinians for Israel’s creation in 1948 blighted Jewish-Arab relations. But the seven-decade schism is a blip when seen from the perspective of centuries of cordial ties dating back to the rise of Islam. Jews thrived under the Abbasid Empire, the greatest that the Arabs have helmed that ushered in Islam’s Golden Age on the back of acceptance, openness, scholarship, and science. Caliph Al-Mansur laid the ceremonial first brick for Baghdad’s foundation as the Empire’s capital on July 30, 762, only after his astrologers, including a Jew, chose it as the most auspicious for work on the city to begin at the site Nestorian Christian monks suggested to him.

Jewish religious scholarship flourished in Abbasid Baghdad. Jews had their own schools where Hebrew was taught. Baghdad once boasted of 10 rabbinical schools and 22 synagogues. Benjamin of Tudela, a 12th-century Spanish rabbi who visited Baghdad as part of an odyssey to the most storied cities globally, called the Caliph “kind unto Israel”, and well-versed in its laws.

This is not surprising, as Muslims believe Islam is an extension of the Abrahamic traditions represented by Judaism and Christianity. The three religions trace their origins to Abraham. Early Muslims prayed in the direction of Jerusalem, the city Muslims, Christians, and Jews consider to be holy.

Jews found refuge in Muslim lands when papal ascendancy in medieval Europe led to religious repression, or inquisitions, from the 13th to the 15th century. Jews were banished from England and France in the 14th century, and from Spain in 1492. The last Caliphate — Ottoman — welcomed Spanish Jews fleeing the Catholic Inquisition. Jews participated in the government under Ottoman rule, thanks to the modernising Tanzimat (re-ordering) administrative, military, educational, legal, and social reforms in the 19th century. The reforms required provincial administrative councils to reflect local religious diversity. Menahim Salih Efendi Daniyal, a Jew, was among the four sent from Baghdad to the first Ottoman parliament in 1877–78. Sasson Efendi Hasqail, another Jew, was elected to the parliament twice from the city.

Jewish-Arab relations deteriorated after Britain promised the Zionist movement a national home — Israel — in Palestine through the Balfour Declaration of 1917. The pledge rode roughshod over the native Arabs, who accounted for 90% of the Palestinian population. The British colonialists regulated migration to Palestine over the following decades and increased the Jewish population there from 9% in 1922 to 27% in 1935. They dispossessed Palestinians by carrying out demolitions under the garb of “urban regeneration”. The Nakba (catastrophe) struck when an estimated 750,000 Palestinians were forced out of their homes in 1948 with Israel’s creation that triggered the first of the Arab-Israeli wars.

The euphoria over the normalisation of Israel’s ties with its neighbours, however, should not take the focus away from the need for Israel to end its policies of dispossessing Palestinians. This is the only way to ensure a durable peace in the region.