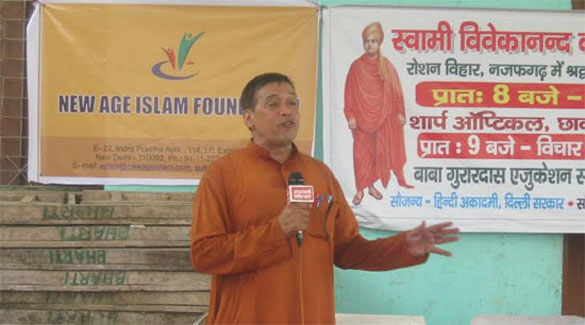 It is believed that Swami Vivekanand attained Mahasamadhi (the act of consciously and intentionally leaving one's body at the time of enlightenment) on July 4, 1902, while he was meditating in his room. He passed away at the young age of 39. In his short lifetime, Swami Vivekananda inspired millions of Indian youth regardless of faith, caste and creed. Recalling Vivekananda’s legacy is the need of the hour today. 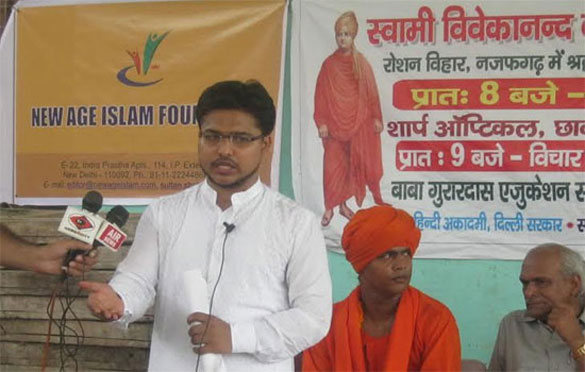 In his address, Ghulam Rasool Dehlvi, a columnist of the multilingual Islamic website NewAgeIslam.com, discussed Swami Vivekananda’s holistic understanding of Islam. He started his speech with a famous quotation by Swami Vivekananda:  “For our own motherland a junction of the two great systems, Hinduism and Islam – Vedanta brain and Islam body – is the only hope… I see in my mind’s eye the future perfect India rising out of this chaos and strife, glorious and invincible, with Vedanta brain and Islam body.”

Dehlvi pointed out that “Swami Vivekananda was a great admirer of the core universal values of Islam that he believed to be the sole reason for its survival.” Dehlvi quoted statements from speeches Swami Vivekananda delivered in the United States of America. For instance: “Mohammed – the Messenger of equality. You ask, ‘What good can there be in his religion?’ If there was no good, how could it live? The good alone lives, that alone survives… How could Mohammedanism have lived, had there been nothing good in its teachings? There is much good.”

Dehlvi continued: “Vivekananda believed that Islam and Sanatan Dharma had striking spiritual similarities in their quest for ultimate liberation. For instance, just as Nirvana (union with the Brahman or Supreme Being) through Moksha (liberation) is the ultimate purpose of life according to the Hindu philosophy, the highest achievement of man, according to the Islamic spirituality (Sufism) is Wisal-e-Ilahi (union with Allah).”

Lamenting the distressing situation created by the religious fanatics of present-day India, Dehlvi said: “Unfortunately, some religious zealots and fanatics, from both the Hindu and Muslim factions, have been weakening the social, cultural and religious ties of the two largest communities of India to further their nefarious ends.  In order to fan the communal fire, they go to the extent of tarnishing the image of great Indian saints.. In their crazy bid to achieve this pernicious goal, the fanatics have been falsely propagating the baseless allegation that Swami Vivekananda was against Islam, while the truth is just the opposite.” 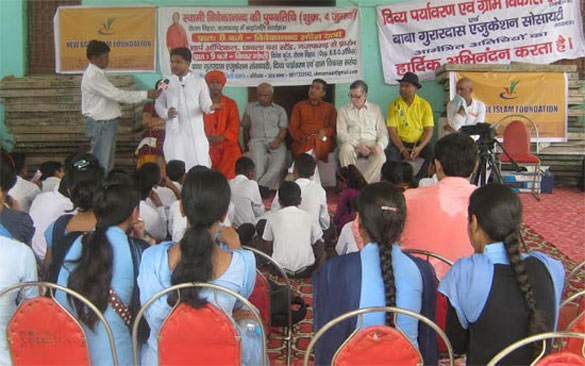 At the end of his talk, Dehlvi asserted that Swami Vivekananda contributed much to the regeneration of India. He claimed that “Vivekananda was the modern revivalist of the Vedanta Philosophy and a strong proponent of universal brotherhood and religious harmony.” Dehlvi added that, Swamiji was vehemently opposed to religious supremacism, decried the primacy ascribed to caste system and stood for social equilibrium and communal harmony.

The chief guest of this event was Professor Vivek Bharti, founder president of Vivekananda Global Awareness Foundation and Vivek Bharti School of Life Innovation. He is known for living the vision of Swami Vivekananda. He opined that Vivekananda synthesised science and spiritualism in a manner unlike any other Hindu religious leaders. Introducing Swami Vivekananda as a great luminary of modern India, Professor Vivek Bharti urged all the audience members, particularly the many students present in the seminar, to remember and attempt to revitalize Vivekananda’s ideas. He said that Vivekananda envisioned the importance of science in achieving intellectual development. This legacy encompasses all of humanity.

Bharti continued: “It’s very difficult to describe Swami Ji’s personality in a few words. It would be akin to describing an ocean by pointing to a pond. His wisdom, rationality, courage, simplicity, objectivity, foresightedness, determination and enthusiasm in the service of his country, India, is peerless. ”

In the keynote address, Kavi Vinod Bansal, former Education Officer, MCD (New Delhi) dwelt on how Swami Vivekananda spread the message of peace, harmony and brotherhood all across India. He asserted that Swami Vivekananda’s views and teachings are relevant not only to Indian society but to all of humanity, irrespective of creed, caste and religion.

The guest of honour, Dr. Hari Singh Pal said that Vivekananda should be remembered as the father of all national leaders, in regenerating the nationalistic ambitions imbibing patriotism in the young generations. Modern leaders of India should emulate him in educating people about the importance of values and legacy that this country has inherited from its pluralistic traditions, said Hari Singh Pal.

Mss. Neera Arora, head of the education department, Young Women Christian Association (YWCA) came to the event with a great number of students from her educational institute. Expressing her views on Swami Vivekananda, she said: “Today, on the occasion of his death anniversary, we should revive and rejuvenate the pluralistic message of Swami Vivekananda, who won the hearts and minds of people wherever he went.” 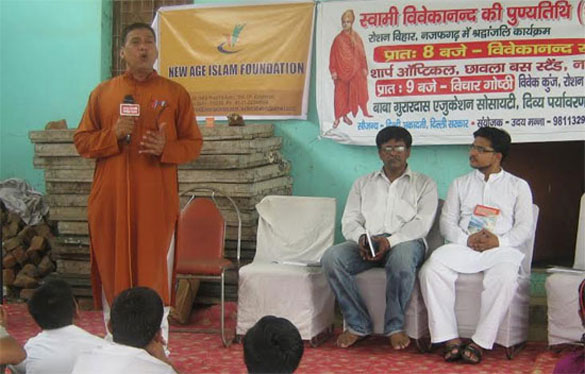 At the end of the event, Programme Co-ordinator, Uday Manna, broadcaster of All India Radio (AIR) and the event organiser, Mr. Mukesh Saini, expressed gratitude to all the guests as well as the audience and students. Books on the life and teachings of Swami Vivekananda were distributed free of cost to everyone present.