On Friday, Turkey’s highest court allowed for the conversion of the nearly 1,500 year-old Hagia Sophia from a museum into a mosque. The centuries-old structure, listed as a UNESCO World Heritage site, was originally a cathedral in the Byzantine empire before it was turned into a mosque in 1453, when Constantinople fell to Sultan Mehmet II’s Ottoman forces. In the 1930s, however, Mustafa Kemal Ataturk, the founder of the Republic of Turkey, shut down the mosque and turned it into a museum in an attempt to make the country more secular. 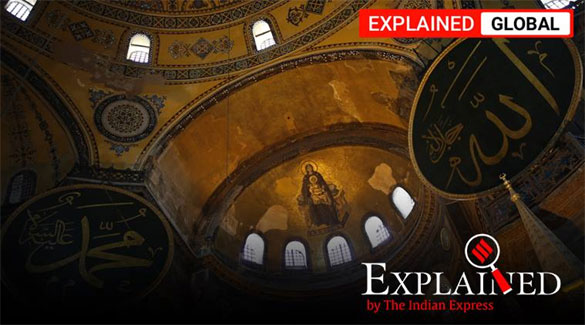 A view of the Byzantine-era Hagia Sophia, an UNESCO World Heritage site and one of Istanbul’s main tourist attractions in the historic Sultanahmet district of Istanbul, Friday, July 10, 2020.

Turkey’s Council of State had declared in its ruling that the conversion of the Hagia Sophia from a mosque into the museum by the country’s founder was illegal. An hour after the court’s verdict was announced, Turkey’s President Recep Tayyip Erdogan issued an order stating the Hagia Sophia was open to Muslim worship. The order read: “The decision was taken to hand over the management of the Ayasofya Mosque…..to the Religious Affairs Directorate and open it for worship.” 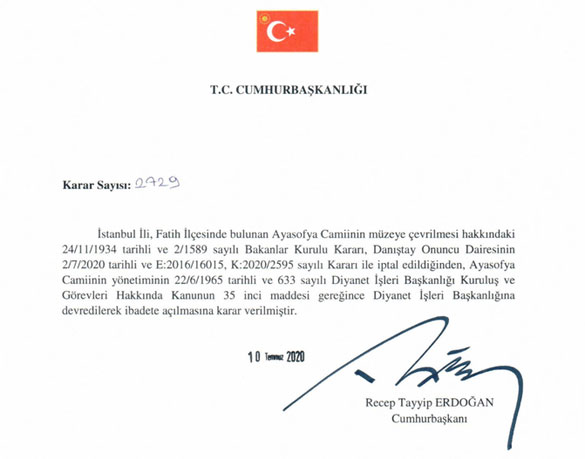 145.1K people are Tweeting about this

On Friday, the Council of State had unanimously cancelled a 1934 cabinet decision concerning the status of the monument and stated that the Hagia Sophia had been registered as a mosque in its property deeds.

Shortly after the court order, Hagia Sophia’s verified social media pages that had referred to the structure as a “museum” were taken down. The change in status of the Hagia Sophia comes after repeated warnings from the international community, including Unesco, to ensure that Turkey did not proceed with these plans.

What Was the Reaction to The Change inHagia Sophia’s Status?

Local news reports broadcast visuals of people in Istanbul assembling outside the Hagia Sophia after the court announced its decision, in celebration of the verdict. Weeks before the verdict, the Ecumenical Patriarch Bartholomew in Istanbul, the spiritual head of Orthodox Christians, had said that converting the Hagia Sophia into a mosque would “fracture” the East and the West.

Following the verdict, Vladimir Legoida, spokesperson for the Russian Orthodox Church stated: “The concern of millions of Christians has not been heard…. Today’s court ruling shows that all calls for the need for extreme delicacy in this matter were ignored.”

Greece’s Foreign Ministry had previously issued a strong statement saying this conversion was a violation of UNESCO’s ‘Convention Concerning the Protection of the World Cultural and Natural Heritage’ where a “designated a museum of world cultural heritage” was “being used to promote other purposes”.

Following the verdict, Greece’s culture minister Lina Mendoni said the ruling “absolutely confirms that there is no independent justice” in Turkey and said the move was an “open provocation to the civilised world”. “The nationalism displayed by President Erdogan… takes his country back six centuries,” Mendoni added. Cyprus condemned the ruling and the European Union said it was “regrettable”. 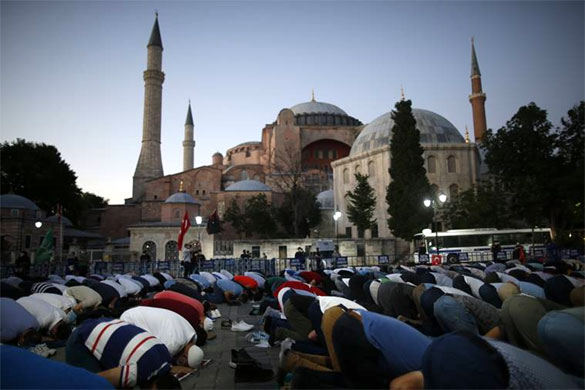 The US State Department said it was “disappointed” by the move and indicated that it would observe Turkey’s plans for the Hagia Sophia “to ensure it remains accessible without impediment for all.”

Turkey found support in the Turkish Republic of Northern Cyprus (TRNC), a territory recognised only by the Turkish government. Prime Minister Ersi Tatar said: “Hagia Sophia has been Turkish, a mosque and a world heritage since 1453. The decision to use it as a mosque, at the same time to be visited as a museum, is sound and it is pleasing.”

Erdogan had faced little opposition to these plans within Turkey, researchers say, because religious minorities had not wished to be involved in what is seen as a polarising subject. Following the verdict, their stance has mostly remained the same, and few in Turkey have publicly denounced the change in the monument’s status.

What Does This Mean for The Hagia Sophia?

Erdogan stated that the Hagia Sophia would open as a mosque after 85 years on July 24 with Friday prayers. According to local news reports in Turkey, the entrance fee that had been put in place when the monument was a museum will be removed, making it free for all visitors. Despite the change in status, the Hagia Sophia will continue to be open to foreign and local tourists. In a televised address to the country, Erdogan said the conversion would require six months to complete. Throughout his speech, observers noted that the president made no mention of Ataturk, the founder of the Turkish republic, perhaps in a deliberate move to remove that association from the Hagia Sophia.

There is no clarity on whether the conversion of the Hagia Sophia will impact the Byzantine artwork and mosaics inside the monument. In 1453, when Constantinople fell to Sultan Mehmet II’s Ottoman forces, the Hagia Sophia was ransacked by the invading Ottomans and turned into a mosque shortly after. The structure of the Hagia Sophia was then subjected to several interior and exterior changes where Orthodox symbols were removed or plastered upon and minarets were added to the exterior of the structure. Many of these Byzantine symbols can still be seen today, and many social media users expressed concern over the future of the remaining mosaics and artwork once the mosque reopens. 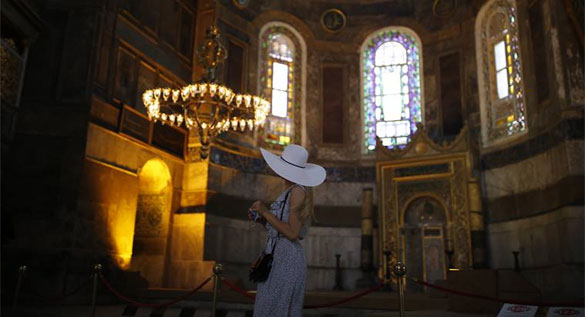 There is also no clarity on whether the monument will continue to hold its UNESCO heritage status following its conversion into a mosque or whether the international organisation will withdraw its designation. Following the ruling, the organisation released a statement saying: “UNESCO calls on the Turkish authorities to open a dialog without delay in order to avoid a step back from the universal value of this exceptional heritage whose preservation will be reviewed by the World Heritage Committee in its next session.”

It is also not clear whether the ruling in the case of the Hagia Sophia will be used to convert other public places that Ataturk converted into museums, for instance, the Topkapı Palace in Istanbul, the former seat of the Ottoman Empire.

What Does This Mean for Secularism inTurkey?

In an interview shortly after the verdict, Nobel prize-winning author Orhan Pamuk told the BBC: “There are millions of secular Turks like me who are crying against this but their voices are not heard…To convert it back to a mosque is to say to the rest of the world unfortunately we are not secular anymore.”

Researchers believe that Erdogan has systematically eroded the secular ideals of Mustafa Kemal Ataturk on which the modern Turkish republic was founded. President Recep Tayyip Erdogan and his AK Party’s dominance over Turkey’s political sphere for close to two decades has slowly pushed it from a constitutionally secular country to a more religious and conservative nation. On the surface, the AK Party has claimed to be secular but as witnessed in the case of the Hagia Sophia, it appears that the party will not hesitate to alter Ataturk’s secular legacy to achieve its own political goals. 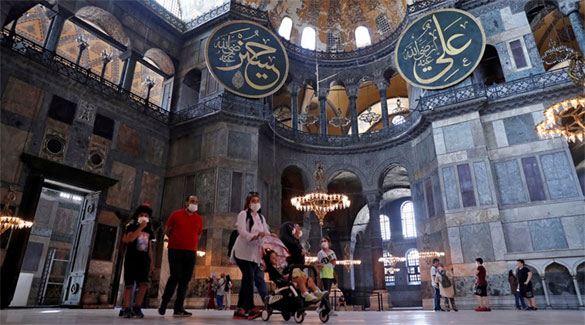 Observers believe that Erdogan’s plans for the conversion of the Hagia Sophia were closely connected with his attempts to score political points and to drum up political support, particularly among conservatives, that he has seen diminishing following his loss in Istanbul’s municipal elections in 2019.

However, research on secularism in Turkey over the past two years shows that many in the country, particularly younger citizens, are less religious, despite the government’s attempts to promote its version of prescribed religious conduct. Erdogan had once stated that he had wished to create “a pious generation”. Analysts believe that young Turks are not interested in this brand of religion and have been actively pushing against it.