Hagia Sophia Could Be a Mosque/Church

Once again, the status of Hagia Sophia of Istanbul, one of the most ancient and magnificent shrines on Earth, is being discussed in Turkey. Some speculate that Prime Minister Tayyip Erdoğan plans to reopen the structure, which has been a “museum” since 1935, as a mosque to consolidate his support among religious conservatives. 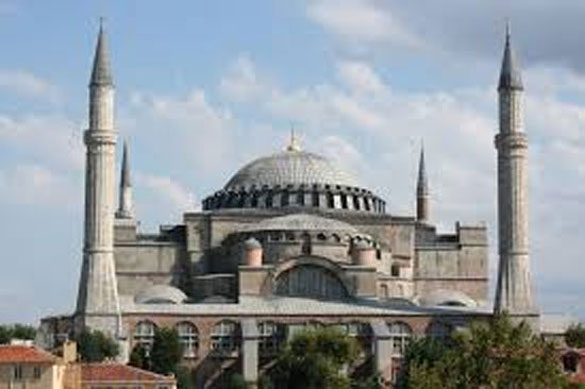 Meanwhile, a Member of Parliament who recently resigned from Erdoğan’s Justice and Development Party (AKP) and who is speculated to be a member of the Fethullah Gülen Movement, Hami Yıldırım, appealed to Parliament last week and demanded the “reopening” of Hagia Sophia. Some think that with this move, the Gülen Movement, which is praised in the world for its ecumenism but condemned for it at home, may try to restore its conservative credentials.

In other words, whoever the actors are, it seems likely that “reopening Hagia Sophia to worship” will be a hot topic in the “New Turkey” of religious conservatives. It will, perhaps, even be a reality.

Yet I have a slightly different idea, which sounds like nonsense to many, but which I am willing to promote nonetheless: Yes, let’s “reopen Hagia Sophia to worship.” But let this worship be both Muslim and Christian.

Here is why. First all, as a defender of religious freedom, and religious person myself, I am not a great fan of converting places of worship into museums. Communist regimes used to do that, assuming that religion had to go into the trash bin of history. Admittedly, the Kemalist regime, which converted Hagia Sophia into a museum in 1935, was driven not only by such ideological secularism, but also concerns of international politics. Yet still, I am willing to rethink this old decision.

However, it is not just Muslims but also Orthodox Christians who yearn for a free Hagia Sophia in which they can worship their Lord. Both religions, after all, have a long history here: Hagia Sophia served Christians from 360 A.D., when it was built by the Byzantine Emperor Constantine II, to 1453, when Constantinople was conquered by the Ottoman Sultan Mehmed II. The latter converted Hagia Sophia into a mosque, and it served Muslims for the next five centuries.

Therefore, I argue, today both religions should have Hagia Sophia back. The magnificent temple, in other words, should be shared by Christians and Muslims, both with regards to space and time. (The upper level for Christians on Sunday, for example, and the lower level for Muslims on Friday)

As I explained in this column before, for Islam, this is not something unheard of. The Grand Umayyad Mosque of Damascus was shared by Muslims and Christians for a period in the early seventh century. If we do that again in Turkey in the 21st century, we will be accomplishing something great – not just for both faiths, but also the fate of the world.

Of course, Turkey has no shortage of bigots who would condemn such a pluralist idea – or, for them, wishy-washy, if not heretical, deviance. But it is worth trying, at least discussing. It is also worth reminding them that if Hagia Sophia can be reopened as a mosque/church, it can create an example for other places of worship with a similar history.

One example would be the magnificent mosque-cathedral of Córdoba, in southern Spain, which was built as a mosque in the ninth century by Arabs, but was converted into a cathedral in 1236 by Catholics during their “reconquista.” That was a time of conquests, after all. But now we need a time of peace, tolerance and pluralism.