Biblical Scholars Spreading Awareness of Dangers of Communalism and Zionism

By A Special Correspondent, TCN 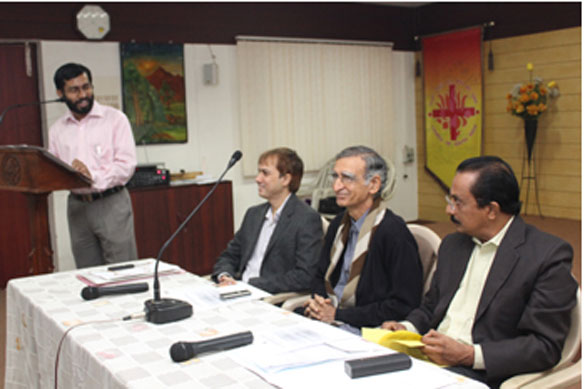 CHENNAI: Activism and spreading the awareness of how much communalism and Zionism can be detrimental to democracy and world peace, are the keys to defeating these ideologies said experts during a day-long consultation on “Hindutva, Zionism and Cultural Nationalism”, in the city on December 20, 2011. Former IIT-Bombay professor and award-winning writer on communal issues and their social impact, Dr Ram Puniyani, and Mr. A. Faizur Rahman, popular commentator against extremism and Secretary General of Forum for the Promotion of Moderate Thought among Muslims presented papers. The consultation was organized by the Church of South India's Inter-Faith Dialogue Centre and saw the participation of Biblical scholars and theologians from Tamilnadu and Karnataka including Rev. S. Chandramohan from Trichy and Rev. Dr. Allan Samuel from Bangalore. Mr. M.M. Philip, General Secretary of CSI Synod presided over the meeting.

In his a paper titled “Communal Fascism in India: Hindutva – Religion or Politics?” Dr. Puniyani spoke about how Hindutva was based almost entirely on politics and had very little to do with Hinduism. He said, “There is a great deal of confusion in the terms, Hinduism and Hindutva. Hinduism is a religion, a collation of multiple traditions prevailing in the subcontinent. Hinduism has Brahmanical and Shramanic traditions. Brahmanism is the most visible and dominant tradition of Hinduism and is based on birth based hierarchy of caste and gender. Shramanism includes traditions like Nath, Tantra, Bhakti and Siddha.”

Dr. Puniyani pointed out that the term Hindutva “was articulated in 1920 by Savarkar as the politics of Hindu elite. Hindutva is whole Hinduness based o Brahmanical values, Aryan Race and culture. RSS took off from here and made this as the base of its politics of Hindu Nation, parallel to the concept of Islamic Nation by Muslim league and in opposition to the concept of Indian nationalism, secularism, liberty, equality and fraternity as propounded by the likes of Gandhi, Ambedkar and Bhagat Singh.”

Explaining further, he said, “the word Hindu was also coined by the people coming from Central Asia who called the people living on East of Sindhu as Hindus. RSS goal today is to do away with the values of freedom movement, to do away with the principles enshrined in Indian Constitution and to bring back the caste and gender hierarchy in the new form. This politics is aiming at the suppression of the rights of Dalits, women, workers, Adivasis and Minorities.”

The post lunch session started with the presentation of the paper “Zionism: The politico-racist hurdle to world peace” by Mr. A. Faizur Rahman in which he set forth the history and the racist basis of Zionism and how its imperialistic ambitions go beyond the occupation of Palestine to a desire to control the world with the help of the USA.

To prove this he quoted extensively from books written by American scholars such as former congressman Paul Findley who exposed “the pervasive influence exerted on American policy by Jewish organisations such as the B’nai B’rith, the American Jewish Committee, the Anti-Defamation League, the Jewish National Fund and the United Jewish Appeal.”  Mr. Rahman warned that this was apart from the hundreds of pro-Israel public action committees (PACs) registered under U.S. federal law led by “the leading Jewish political force in America”, the American Israeli Public Affairs Committee (AIPAC). Citing Findley he said that “AIPAC’s influence on Capitol Hill goes beyond U.S.-Israel relations. The organisation has an international outreach program through it promotes Israeli interests by manipulating the American foreign policy.”

Mr. Faizur Rahman accused the Zionists and their right wing Christian supporters of manipulating the Bible to suggest that it preaches racism. He said:“the Bible is quoted to prove that God approved of the manner in which Hagar and Ishmael were forced to wander in the “Desert of Beersheba” after being unceremoniously thrown out of Abraham’s house by his wife Sarah.”

The matter distressed Abraham greatly because it concerned his son.  But God said to him, “Do not be so distressed about the boy and your slave woman. Listen to whatever Sarah tells you, because it is through Isaac that your seed will be reckoned (Genesis 21:11-12)

Quoting the above verse Mr. Rahman lamented as to how racism is attributed to a compassionate God who loves all His Children equally. In this context he referred to American  televangelist John Hagee’s book Jerusalem Countdown in which he invoked the concept of “divine election” (based on Romans 9: 7-13) and said that “a loving and gracious God has elected to save some and elected to allow others to be lost for eternity in the fires of hell.” The “saved” people are of course, the Jews, and the “lost” people are the Arabs, who descended from a “slave woman” Mr. Rahman pointed out.

Finally, acknowledging the fact that there were several honest and well-intentioned Jews within Israel who detested Zionism, Mr. Faizur Rahman said, “The only way to defeat the evil designs of Zionism is for the peace loving Jews, Christians and Muslims to forge an indivisible unity” on the basis of the Quranic verse;

Oh People of the Book! Let us come to common terms as between us and you: That we worship none but God; that we associate no partners with Him; that we erect not, from among ourselves, Lords and patrons other than God." (3:64)

Earlier, the Director of the Department of Ecumenical Relations & Ecological Concerns, Church of South India Synod, Rev. Viji Varghese Eapen welcomed the gathering. Each paper presentation was followed by an interactive discussion with the audience and the meeting ended with the singing of the national anthem.