Destroying a Composite Heritage: The Shrine at Pirana

‘These Patels want to become Hindus now’. The elderly Muslim man who told me this was referring to the Kutchi Patel community who show immense faith in the Satpanthi tradition of Imam Shah whose shrine is located at Pirana, some twenty odd kilometres from Ahmedabad. Locally known as Imam Shah Bawa, the faith he helped create called the Satpanth (the true path) has followers both from the Hindu and Muslim faith. Within the shrine complex, one can see both Hindu and Muslim devotees offering their prayers according to their respective religious traditions. While in the popular memory, Satpanth is open to all faiths, history tells us a slightly different story.

Historically, Imam Shah was a Shia, on the run from Sunnis, who found refuge in Pirana and practiced Taqayyah which is to say that he hid his identity from others but deep within, he continued to be a Shia Muslim. However, in order to avoid persecution, not only did he hide his identity but he also started the practice of Satpanth which eventually would blossom into a new faith altogether. Although today, it would be blasphemous if someone would say that Imam Shah Bawa was a Shia Muslim to start with. Be that it may, in the popular rhetoric and imagination, it is perfectly fine to be a Muslim and a Satpanthi or a Hindu and a Satpanthi.

Before we come to the conclusion that this is a new phenomenon, a little bit of history again will help us to understand that communities such as the Satpanthis are hardly an aberration in this land.

South Asia has had a history of what were called niminal communities wherein religious boundaries were often porous making these communities to define in terms of Hindus or Muslims. The Malkana Rajputs, the Meos of Mewat are obvious examples who had a rich amalgamation of both Hindu and Muslim religious ideas and practices. The process of acculturation which gave rise to such communities had an inherent pluralism about their existence. Thus communities such as Huseini Brahmans even today commemorate the Shia practice of Matam despite being Hindus.

Over the years, however, partly owing to the proselytizing efforts of Muslim groups like the Tabligh Jamaat and Hindu groups like the Arya Samaj, these communities have had a difficult choice to choose only one religion to as a marker of their identity. The modern state has also played its part as it is more comfortable with singular identities rather than composite or fuzzy religious identities. Modern states are enumerative and in the process of this exercise, classificatory boundaries become important. Over a period of time, owing to external and internal pressures, communities which were earlier polyphonous are forced to string a singular note. Thus today there are no Malkana Rajputs, but there are only Muslim Rajputs and Hindu Rajputs. Similarly there are hardly any Meos left today, what we encounter in parts of Mewat is that either they are Hindus or Muslims.

Something similar can be seen at the shrine of Imam Shah at Pirana. While the Kachchi Patels continue to bury their dead in Muslim fashion, overtly the aesthetics of the shrine is slowly but surely changing to a resemble a Hindu temple. For start, the shrine is no longer referred to as the Dargah or Rauza which was the traditional practice but as a Samadhi. 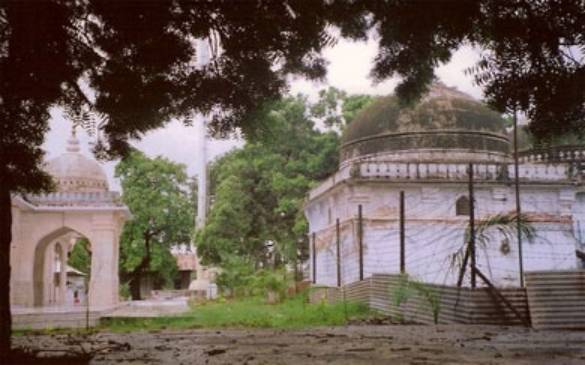 A barbed wire fence put up by the Satpanthi dargah administation to separate the Pir's tomb from the masjid.Photo: Dionne Bunsha

One of the first things that a visitor would see upon entering the sanctum sanctorum of the shrine is a huge symbol of Om hanging from the ceiling. Moreover, the mosque which was earlier part of the shrine complex has now been separated by a barbed fence. Access to this mosque is no longer through the shrine courtyard but from outside the shrine complex which gives one the feeling that the mosque is entirely separate from the shrine. The shrine custodians told us that Muslims wanted to separate the mosque, the reality however is that it was done by the government not so long ago. All this becomes easy as the committee which oversees the shrines is dominated by the Patels with only three Syed Muslim members who hardly have the courage or the voice to oppose the tampering of the composite history of the shrine.

It is extremely sad that what we are witnessing in Pirana is the slow takeover of religious bigotry over something which was plural and composite having no fixed boundaries. Given the political climate, it seems likely that this takeover will not even be resisted. But what we will lose in the process will be something infinitely bigger and beautiful than either being Muslim or Hindu.

A Newageislam.com columnist, Arshad Alam is a New Delhi based writer