A Report in Economist 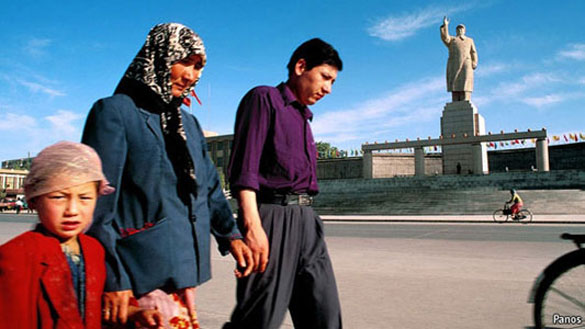 IDH KAH mosque in Kashgar, said to be the biggest in China, boasts a noticeboard recalling the care lavished on its restoration by the central government. The monument is an emblem, it claims, of “the harmony among China’s ethnic groups”. However, many of the men idling in the shade of the mosque’s leafy grounds on a Saturday in the holy month of Ramadan are in an unharmonious state of mind.

Xinjiang, the vast region in whose west lies the old Silk Road city of Kashgar, has a history of tension between the ethnic-Turkic, mostly Muslim, Uighurs who used to make up most of its population, and the authorities, dominated by ethnic-Han Chinese. During Ramadan, which comes to an end on August 19th, that tension has been exacerbated by the government’s intervention in religious practice.

It has been discouraging, and in some places even banning, Communist Party cadres, government officials, students and schoolchildren from fasting and attending mosques during working hours. “Every year it’s the same,” says one man, sporting the four-cornered embroidered green hat worn by many Uighurs. “But my children are Muslims. We just ignore it.”

Groups representing Uighur exiles say that this year the campaign has been more intense than usual. Xinjiang’s government has denied forcing people to break the fast. Hou Hanmin, a spokeswoman, was quoted by Global Times, a party-owned newspaper, saying that the government did, however, “encourage residents to eat properly for study and work purposes.”

This is resented by many Uighurs as yet another encroachment on their traditions. Kashgar is rapidly becoming a Chinese city like many others. A huge statue of Mao Zedong overlooks the central People’s Square. The old town of mud-brick houses linked by labyrinthine alleys is disappearing, eaten up by broad avenues lined by high-rise buildings. In Xinjiang as a whole, Uighurs and other minorities are now outnumbered by Han Chinese.

Many Uighurs long for independence, which the region briefly enjoyed as East Turkestan in the 1930s and again in the 1940s. The emergence of independent Central Asian republics after the collapse of the Soviet Union in 1991, and then the toppling of Arab dictators in 2011 encouraged exiles to dream. But independence is not on the cards, though anti-Chinese sentiment does at times turn violent—most dramatically in 2009 in Xinjiang’s capital, Urumqi, when at least 150 people died in rioting and the battle to contain it.

Given this history, it seems surprising that the government should risk inflaming passions by interfering with religious observance. Exiled activists see it as fitting a pattern. “The whole idea,” says Alim Seytoff of the Uighur American Association, “is to secularise the Uighur people.”

That may be putting it too strongly. But the government itself makes a link between religion and politics. In Ms Hou’s words, “religious extremism is closely related to violence and terrorism, and cracking down on these is one of our top priorities.” To that end, presumably, the government has been coming down hard on illegal Islamic schools. One raid in June, on a school in the southern city of Khotan, led to several children being injured. Exiles blamed tear gas; the government said the school’s staff set off explosives.

The facts in a number of other recent incidents are similarly disputed. What the authorities called a “terrorist hijacking” of a flight from Khotan to Urumqi in July (using a crutch as a weapon) was blamed by exiles on a fight provoked by anti-Uighur discrimination. Twenty Uighurs, sentenced to lengthy jail terms this month for involvement in terrorism and separatism, were, according to exiles, guilty merely of reading banned material on the internet. 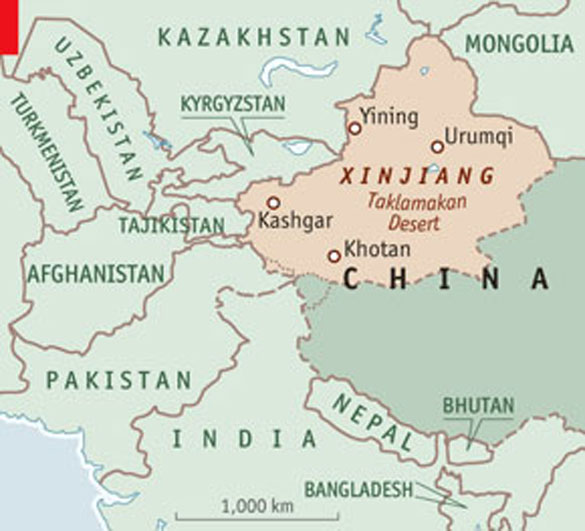 It is understandable that China is nervous about the spread of Islamist extremism. It has only to look at its own borders to see its consequences in Pakistan, Afghanistan and Central Asia. The Chinese have complained to Pakistan—a close ally—that it is not doing enough about extremist groups in its tribal areas, where China says Uighur terrorists plot mischief in Xinjiang.

In Kashgar, however, security this month does not seem too obtrusive. Even the open grumbling of many Uighurs is, in a way, a sign of relative relaxation. When tensions rise, the Chinese authorities have shown themselves well able to prevent any attempted uprising. What they seem unable to do, in spite of the investment they have poured into the region, is to tackle the inequalities and prejudice that alienate so many Uighurs.