By Taha Siddiqui and Declan Walsh 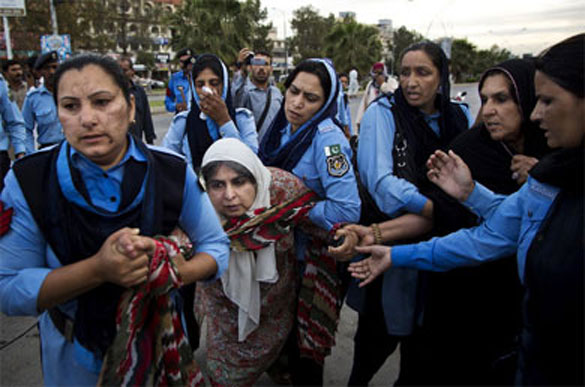 Niaz Bibi’s son disappeared into the night, whisked away by Pakistani soldiers who accused him of being a Taliban fighter. For 18 anguishing months, she could find no word of his fate. Then, last year, the phone rang.

“Come to Kohat prison,” said a man on the other end. “Tell nobody.”

Inside the prison in north-western Pakistan, Mrs. Bibi was directed to a separate, military-run internment centre. She wept when her missing son, Asghar Muhammad, was brought before her. “We touched hands through the metal grill,” she recalled. “I could feel his skin against mine.”

Mr. Muhammad, in his early 30s, reassured his mother that he would be home soon. But when the phone rang again a month later, an official delivered crushing news.

Mr. Muhammad was one of dozens of detainees who have died in military detention in Pakistan in the past year and a half, amid accounts of torture, starvation and extrajudicial execution from former detainees, relatives and human rights monitors. The accusations come at a time when the country’s generals, armed with extensive new legal and judicial powers, have escalated their war against the Pakistani Taliban by sweeping into their strongholds and detaining hundreds of people.

But critics warn that those gains may be coming at the cost of human rights, potentially weakening Pakistan’s fragile democracy and, ultimately, undermining its counterterrorism effort.

“People live in abject fear of speaking out about what the military is doing,” said Mustafa Quadri of Amnesty International, which received reports of over 100 deaths in military custody in 2014.

At issue is a network of 43 secretive internment centers dotting Khyber-Pakhtunkhwa Province and the tribal belt. Little is known about the centers, which were formally established in 2011 and given greater powers by a tough antiterrorism law passed last year. Most are based in existing jails and military bases and operate far from public view. The total number of detainees has not been made public.

Relatives of missing people have filed 2,100 cases to the Peshawar High Court, seeking news of their fates. In many instances, the first news comes when a body is sent home.

Last year, for instance, a man from the Kurram tribal district told the court that three of his six sons who were detained in Kohat had died in custody. The man’s lawyer said he had not brought a criminal complaint against the military out of fear that his remaining sons would meet a similar fate.

The chief military spokesman, Maj. Gen. Asim Bajwa, did not respond to a detailed list of questions about conditions at the internment centres.

Pakistani military officials had tortured and killed people suspected of being militants “with the knowledge, if not consent, of senior officers,” said one American assessment in 2011.

“The military took care to make the deaths seem to occur in the course of counterinsurgency operations, from natural causes, or as the result of personal vendettas,” said the document, which was first cited by The Washington Post.

The Obama administration, which has gradually improved its relationship with Pakistan this year, has been muted in its public criticism of the violations and has not invoked a provision of American law that limits assistance to foreign militaries guilty of human rights abuses. Instead, the administration approved more weapons for the Pakistani military: In April, it approved almost $1 billion worth of helicopters and laser-guided Hellfire missiles for use in counterterrorism operations.

Until recently, accusations of such abuses by Pakistani soldiers and intelligence officers have been sharpest in western Baluchistan Province, where the army has faced accusations of abducting, torturing and killing people suspected of being Baluch nationalists as part of a decade-old effort to quell a separatist rebellion there.

The deaths at internment centers have come in conjunction with the military’s battlefield gains — in the past year, it has seized control of much of North Waziristan — and a general hardening of public opinion against the Pakistani Taliban.

Tough, new antiterrorism laws have given the army greater legal powers, and the number of deaths in military custody has declined in recent months since a military courts system, authorized by Parliament in January, became active. Fayaz Zafar, a journalist in the Swat Valley, counted 48 bodies being returned to that area in 2014 and five so far this year, the latest on June 2.

Experts say the military-run courts fall far short of international standards, and their authority is being challenged in Pakistan’s Supreme Court. But public opposition to the courts has been muted, particularly since a Taliban massacre that killed 150 people, most of them children, in December. The authorities have taken harder action against militants on other fronts, too, lifting a moratorium on executions that has led to 178 convicts being hanged.

The executions have drawn repeated protest from the United Nations and the European Union but barely a whimper of public complaint.

By several accounts, conditions at the internment camps can be brutal. One former detainee from Swat said he had been thrashed with barbed wire, reduced to eating soap because he was fed so little and forced to give false testimony against other detainees in court.

“I felt guilty, but I knew I would be beaten if I refused,” said the man who, like others, spoke on the condition of anonymity to avoid further trouble.

Relatives of detainees who die in custody say they have been pressured into conducting hurried funerals, often at night, and sometimes coerced into declining an autopsy, even if the corpse bears signs of ill treatment. In other instances, they say, local mullahs are forbidden from offering prayers for the dead.

Asma Jahangir, a leading human rights lawyer, has brought a Supreme Court case challenging the detention of 33 men. When brought to court two years ago, two of the men said they had been tortured. They have since died in custody. “They supposedly had heart attacks,” Ms. Jahangir said.

In Swat, several women have formed a protest group to seek news of their missing relatives through street demonstrations and court actions. Their leader, Jan Saba, said in an interview that she had “knocked on every door” in search of news of her missing husband, but that she still had heard nothing.

Few dispute that many of the military detainees are linked to the Taliban. Mr. Muhammad, the detainee who died in Kohat, admitted to his family that he had spent eight months in the company of Taliban fighters before being arrested last year, relatives said.

One of his brothers, Abid, said that when the family asked Mr. Muhammad what he was doing during that time, he replied, “The less you know, the better.”

Such tales have led civilian officials to turn a blind eye to conditions at the internment centres. Jamaluddin Shah, the top civilian official in Kohat, said in an interview that he did not believe the military practiced torture or conducted executions at the centre. But, he added, “Even if such cases were true, why would that be an issue?”

“Have you seen them slaughtering people and distributing those videos?” Mr. Shah said, referring to Taliban execution videos. “Do you think they deserve any human rights?”

But although the army has clearly weakened the Taliban in recent months, experts warn that reports of abuse could ultimately hurt its counterterrorism effort, in much the same way that harsh American tactics after 2001 led to global condemnation and bolstered militant recruitment.

“These laws risk turning Pakistan into a security state,” Ms. Jahangir said. “We cannot afford torture and killings on a mass scale, even in a time of war.”

Taha Siddiqui reported from Kohat, and Declan Walsh from London. Eric Schmitt contributed reporting from Washington and an employee of The New York Times in Pakistan.