Human Rights Situation in Iran Has Not Improved Substantially 8 Months after the Election of a Moderate President, Speakers Point Out at a Side-Event in UNHRC at Geneva 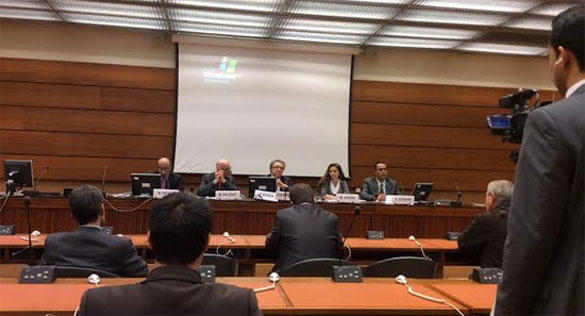 New Age Islam Report from on a side event sponsored by:

The meeting took place in:

Mr. Peviz Solgi Khazai (Former ambassador, Member of the Association of the International Lawyers (Norwegian branch, Representative of NCRI in )

How is the situation in 8 months after the election?

Feb 21, 2014 - Spokesperson for the UN High Commissioner for Human Rights: We are deeply concerned about the reported spike in executions in since the beginning of this year. In just over seven weeks, at least 80 people have been executed. Some reliable sources indicate the figure could be as high as 95.

22 January 2014 – The United Nations Special Rapporteurs on the situation of human rights in , Ahmed Shaheed, and on summary executions, Christof Heyns, today called on the Government of Iran to urgently halt the abrupt surge in hangings in the country since the start of 2014.

Hereby follows a draft of the presentations made by the panelists:

The Chairman welcomed the attendees and gave a short presentation of the speakers. He also made a note about the present situation of human rights in and the escalating number of executions and street arrests.

Mr. Marc Falquet : Quoted Amnesty International on their statements regarding the escalating number of executions in and the methods in which the execution is carried out. Cranes are used not for building and reconstruction, but in order to lift up the victims by the noose on which they are slowly strangulated to death. Political and social activist are accused of enmity with God (Moharreb) and punished as such with imprisonment, torture and death.

The death penalty is handed out on lesser charges, conventionally not perceived as serious crimes. The threshold for capital punishment is surprisingly low in . After president Rouhani came to power no substantial improvement has taken place. They use of capital punishment is increasing and paving the way for a new human rights violation record since the Islamic revolution

We are told that has elected a moderate president, but in the president has a minor, subordinate role in comparison to the supreme leader. The supreme leader, the valie faghih is the supreme spiritual and political authority in . He is perceived as the interim leader of the Muslim world during the Great Occultation and that he is a minor manifestation of the Shie Islamic Messiah. He is the leader of the Umma till the coming of the last Messiah (Mahdi). In this regard he is the greatest mufti and the dominating moral and interpreter of Islam and the political head of the Islamic community.

I am currently an exiled journalist in touch with my colleagues in , whom I have worked with since 1992. I have been employed, written reports and covered news for several dozen journals and newspapers in . So many of these journals and papers were shut down in their early days of publishing and some were shut down by the Intelligence Ministry prior to publication. In the state and the mullahs in power define what subjects that are considered as threatening to the security of the state. Journalist are constantly reminded of what expressions that are banned from being mentioned in the press and what subjects that are not to be covered by the media. As a consequence journalists employ self censorship extensively. This adheres to minor issues as well as politically sensitive subjects. I remember that at times even an soft issue such as the air pollution in Teheran was a banned subject. The environmental condition of the city was so poorly that elaborating on the subject in the media would disclose and further arouse the dismay of the people, the authorities believed. Therefore we were not allowed to touch the subject since this was regarded as a matter of national security.

Being a journalist in is best described as walking in a minefield. One unfortunate step and it all blows up and explodes in your face. Exchange of information and engaging in dialogue with foreign press and colleagues, a custom in journalism, is punished severely. So often have I seen my former colleagues in Iranian television? But they were not presenting news or reports. They had been accused of espionage on behalf of foreign powers. After days of torture they were broken down and were testifying against themselves. They would admit to being agents of foreign powers seeking to undermine the Islamic Republic. They accused themselves of being unreliable also in their personal life and having cheated on their wives. I knew this not to be true. They were forced to disgrace themselves on a personal level in order to be discredited as journalists as well.

I still keep in touch with my colleagues in and it is evident to me that the conditions for the press and freedom of expression have takes a turn to the worse. Since the election a number of news papers have been shut down and my colleagues arrested.

The theocratic dictatorship ruling is misogynist to its very core and relies on oppression in order to stay in power. What we consider subordination of woman, they consider the divine order of things and any claims to the contrary is severely punished as heresy.  So it is not enough to put the finger on the escalating number of executions and street arrest to warn of the treat the mullahs pose to humanity. If the mullahs were to abandon misogyny, the ruling theocracy would surely collapse. So, what do they do? They resort to misinformation instead. In order to present themselves as moderates while at the same time curbing the will of the people in their iron fist, they hide behind cultural and religious differences as a means of escape. When criticized for inequality and injustice in the Iranian penal code, they claim Iranian Islamic culture and society has a different view on these issues. So in fact they resort to blaming the victim for the crime. These claims are by no means true. If anything: codes of chivalry in traditional societies such as , forces the mullahs to restrain themselves in their barbaric punishment of women. In fact in we are faced with a paradox, rarely experienced otherwise in equality movements in other parts of the world. Iranian culture and society is much more progressive than the reactionary mullahs in power. The Iranian resistance is led by Maryam Rajavi. Muslim women such as her reject the Iranian authorities' misrepresentation of Islam and Iranian culture as misogynist.

I was a political prisoner in and have spent 10 years behind bars. I was subjected to barbaric torture and solitary confinement for 8 years. I was accused of being a Moharreb, meaning I was an enemy of God for defying the fundamentalist regime in . I refused to give them the names of my comrades in order to spare them the agony of arrest. Because of this I was confined to a dark cell. In the loneliness and darkness you find yourself losing any track of time and your memories start to fade away. My only contact with the outside world was during the interrogations on which I was dragged out of my cell and beaten. Many of the prisoners in the cells next to me went mad as a consequence of solitary confinement.

Though I exercised routinely in my cell I found myself getting sicker as time passed. After several years of confinement I was hospitalized in 1988. During the short time of my stay in the hospital, Iranian prisoners were massacred in great numbers. I escaped execution due to my time in the hospital. When I returned to prison I was made aware that 25 of my comrades in prison had been executed.

I urge the United Nations to investigate the massacres of political prisoners in in 1988-89, and refer the dossier of 's human rights violations to the Security Council.

After the presentations were made the floor was open for debate with questions and comments from the audience.

The matter most discusses was regarding the mandatory headscarf for women in . One man in the audience remarked that even when diplomats and politicians from the west travel to they are seen wearing the headscarf. The chairman of the panel added that the foreign affairs minister of on her recent travel to refused at first to step outside the plane when it landed in Teheran. She was told she must wear the veil but she refused. She stipulated that Muslim women in are free to wear their veil in public on the streets of , as a respect for their customs. Therefore she must have the right not to wear the scar on the streets of Teheran if she likes. The diplomatic crises were eventually solved when the minister despite her initial refusal agreed to cover her head.

The audience debated on the matter of the veil and to what extent it is a sign of oppression. Milica Javdan responded by saying that many Muslim women choose to wear the scarf freely and it is their right to do so. But many Muslim women do not and it must also be their right to refuse. The scarf in itself is not a sign of misogyny. It is rather when it is forced upon the heads of women that it symbolizes oppression. As was the case with the Italian foreign affairs minister. In she is perceived as a woman and a gender first and foremost, though she is the diplomatic head and envoy of in . Women in are perceived not so much as humans who engage in different roles in society. They are considered as gender first and as such as a constant threat to men.

The chairman greeted everyone for attending the meeting.