The mask has once again come off the face of the self-proclaimed flag bearers of the Islamic principles, Saudi Arabia. A secret document of the government of Saudi Arabia which was leaked last year shows how the Sauds have violated not only the Islamic principles but the clauses of Geneva Convention in their zeal to remove the Shi’ite ruler of Syria, Bashar al Assad who has been a close ally of their arch rivals, Iran. 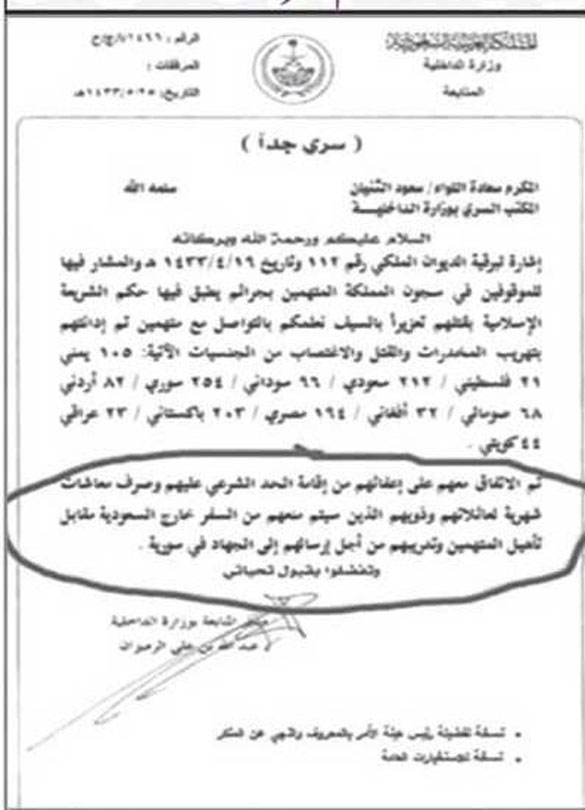 Recently, Md Al Arifi, a mufti of the kingdom had during a Friday prayer, called for jihad against the apostate government of Syria and had exhorted the youth, retired army officers, soldiers and general masses of Saudi Arabia to join the ‘jihad’ against Bashar al Assad in Syria.

After his address, there was an upsurge among the Saudi youth to join the jihad in Syria. Many wealthy Saudis are funding their departure and the government of Saudi Arabia has been encouraging such youth to go to Syria and take part in the murder of Syrian men, women and children, rape of Syrian Muslim and Christian women and destruction of their property.

However, the government of Saudi Arabia actually went one step further. They have offered hard core criminals lodged in various jails of the kingdom clemency if they agree to join the war in Syria. And many of them have already accepted the offer. The leaked document shows that among the criminals who have agreed to join the jihad in Syria are 105 Yemeni, 21 Palestinian, 212 Saudi, 96 Sudanese, 254 Syrian, 82 Jordanian, 68 Somali, 32 Afghan, 194 Egyptian, 203 Pakistani, 23 Iraqi and 44 Kuwaitis.

All of them are convicts who have been awarded death sentence by Saudi courts for committing heinous crimes like murder, rape, robbery etc.

The document shows that the authorities have ordered the release of such hardened criminals on the condition that they will join the subversive activities in Syria. The practice also constitutes gross violation of Geneva Convention of wartime rights of civilians and prisoners. This could even pave the way for the prosecution of the Saudi government at the International Criminal Court in The Hague.

Before leaving for Syria, the convicts are supposed to attend a training camp where they will receive training in arms and ammunition. According to reports, for the time they will remain in operation, their families will remain in custody of the government to make it sure that they do not flee from the battlefield. Their families will receive allowances during that period and will not be allowed to leave the kingdom.

According to reports, since the Saudi Arabia does not share its borders with Syria, these criminals enter Syria via Turkey and Jordan.

Among the ‘criminals’, there are also those Saudi youths who have been arrested for taking part in protests and demonstrations against the Saudi government. In one such case, a judge called 19 youths facing charges of waging war against the state in his chamber and delivered to them a long lecture about the need to fight the real enemy, the Shias and told them they should not fight inside the country. After that, most of the youth left to join the rebels in Syria. One of the youth Md Al Talq was killed in Syria in December 2012 after which his father filed a complaint against the judge but the government did not respond to his complaint.

Earlier in 2010, a secret Saudi document leaked by an Iraqi news agency exposed the link of the Saudi kingdom to the Al Qaida terrorism. The Buratha news service published the document that disclosed how much money the kingdom had released to Al Qaida in Iraq. The document showed that the Saudi government was aiding and supporting the Al Nusrah front in Iraq. Surprisingly, the Saudi government did not deny the charge and cracked down on intelligence officials in a bid to bring the guilty officers to book. In all, 37 intelligence officials were arrested.

Recently, in the first issue of the English mouth piece of the Taliban, Azan, the Taliban have claimed that they have got all the ‘resources’ to inflict a devastating attack on the enemies (Syria, the US, Pakistan army, the Indian army etc.). This is a clear indication of the funding they have got from the oil producing nations of the gulf.

The Saudi Arabia claims that it is opposed to terrorism but a number of incidents prove otherwise. 19 of the attackers of 9/11 were Saudis. Two princes of the Saudi kingdom have been killed fighting for Al Qaida.

Recently, the financial support of the Saudi Arabia for Jubhat Al Nusra front, a branch of Al Qaida in Iraq is no secret. According to reports, the entire security intelligence apparatus of Saudi kingdom under the head Bandar bin Sultan has been aiding the Al Nusra front in Syria in carrying out explosions, massacres and rapes. Saudi Arabia together with Qatar has been smuggling explosives and dispatching terrorists to Syria with the assistance of neighbouring countries including Turkey.  They have also set up command centre in Turkey to control the operations in Syria from there. This is the reason behind the souring of relations between Syria and Turkey. Saudi Arabia, Qatar and Turkey have chalked out a plan to make a powerful attack on Damascus, the capital of Syria to topple Assad and for that they are trying to push rebels from two fronts – from Turkey in the north and from Jordan in the South. And for this purpose the Saudi kingdom does not even hesitate to force the criminals to join their version of jihad which is not only a violation of Geneva convention but also a violation of Islamic teachings of which they claim to be the sole flag bearers.