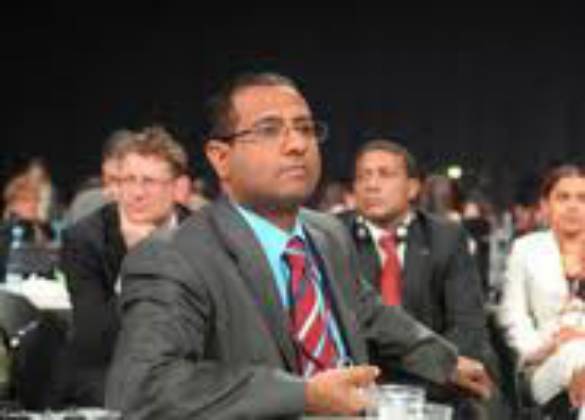 Former Foreign Minister and UN Special Rapporteur on Human Rights in Iran Dr Ahmed Shaheed has welcomed the Maldives’ selection as a Vice President of the UN’s Human Rights Council for 2013, stating that the nomination can help strengthen society against domestic abuses.

Speaking to Minivan News by e-mail today, Dr Shaheed said significant human rights concerns remained in the Maldives, including the “pathetic state of the judiciary”, lack of an educational focus on rights, and little scope for “informed discussion” on religious freedom.

However, Dr Shaheed added that the Maldives’ election to the council reflected the strong reputation of its diplomats over the last six years in “championing” human rights causes, even despite developments such as February’s controversial transfer of power that saw a new government installed following a police and military mutiny.

“If you look at the Maldives’ voting record in Geneva and in the Third Committee in New York, it is as if there has been no change in the government in Male’. The Maldives still supports country-specific mandates, country-specific resolutions, and progressive positions in human rights debates, including on issues of defamation of religion,” he said.

“The Maldives will continue to get challenged in places like the Human Rights Committee but in the political councils of the world, the spokespersons for the Maldives continue to be professional diplomats, and they are doing a good job to limit the influence of radical Islamists on foreign policy.”

News of the Maldives’ election to the Human Rights Council was broken by the Reuters news agency, which noted that the country had the same day been criticised for its stance on banning religious freedom in a report compiled by the International Humanist and Ethical Union (IHEU) NGO.

The IHEU, which describes itself as an “umbrella organisation embracing Humanist, atheist, rationalist, secularist” organisations around the world, yesterday published its report, ‘Freedom of Thought 2012' , which details international examples of discrimination against non-religious people.

The report, which was welcomed by UN Special Investigator on Freedom of Religion and Belief Heiner Bielefeldt, concluded that the Maldives did not prohibit discrimination on a religious basis, while also making practising Sunni Islam compulsory for Maldivian citizens wishing to vote or stand for office.

Pointing to prominent cases of discrimination, the IHEU highlighted the case of 37 year-old Mohamed Nazim, who in 2010 faced public calls for his execution after standing in front of a crowd of 11,000 people in Male’ and declaring himself “Maldivian and not a Muslim”.

After two days of religious counselling in police custody, Nazim repented before television cameras at an Islamic Ministry press conference and gave Shahada – the Muslim testimony of belief.

The report also highlighted the case of 25 year-old air traffic controller Ismail Mohamed Didi, who was found hanged from the control tower of Male’ International Airport in an apparent suicide.  He had previously sought asylum in the UK for fear of persecution over his stated lack of religious belief.

Speaking to Minivan News, IHEU Communications Officer Bob Churchill said the NGO did have some concerns over the Maldives’ election to the Human Rights Council considering its attitudes to non-Muslims and non religious peoples.

However, Churchill added that the Maldives was not the first country to hold such a position in the UN council while also having questions over its own work on human rights abuses.

The IHEU added that the report has been put together in order to stand as a reference for alleged abuses of non-religious peoples on countries all over the world.

Churchill suggested that the high-profile focus may help “shine a light” on wider abuses occurring in the country and allowing for some form of redress.

However, in the case of the Maldives, where the country’s religious ideals are enshrined in its constitution, Churchill accepted that effecting any sort of change would be much harder.

“However, just because an issue is a sovereign matter and has a vocal majority it does not mean that people are not suffering,” he said. “People at present are having to hide their beliefs for fear of oppression.”

Despite the concerns of the IHEU, Dr Shaheed said he was optimistic about the Maldives’ new role on the council.

“The Maldives [UN] delegation still enjoys a good reputation in Geneva and is still playing a very constructive role. I believe the position would militate in favour of improving the domestic human rights situation,” he said. “I would like to congratulate Ambassador Iruthisham [Adam] and her team for this fine achievement.”

Addressing the issue of freedom of religion in the Maldives, which he stressed was a fundamental human right, Dr Shaheed said that any nation choosing to impose any particular faith on its people or discriminate along the same lines would face “stiff international opposition”.

“A number of NGOs have been raising the issue of religious intolerance in the Maldives, and the notion of sovereignty does not trump human rights obligations. There is indeed scope for informed discussion in the Maldives on religious freedom,” he said.

“Perhaps a good place to start would be to lift the ban on the book co-authored by Dr Hassan Saeed – the current Special Advisor to President Waheed – which argues that there is no apostasy in Islam. This is a position that is upheld by a growing number of reputable scholars in the Islamic world and elsewhere.”

Beyond the issue of religion, Dr Shaheed claimed that the Maldives had over the last decade pressed ahead with a number of significant developments in bringing the country in line with human rights regulations.

“The biggest breakthroughs, in my view, were the ratification of the core international human rights treaties, and the establishment of an independent human rights commission, as well as freedom of the press, and the separation of powers,” he said, but emphasised that there remained room for improvement.

“The major failures include the pathetic state of the judiciary, which is not only corrupt, but also coming under the influence of radical Islam, even to the extent of violating codified laws of the Maldives and clear international obligations,” Dr Shaheed added.

“Disregard for rule of law has also meant that a culture of impunity is deeply entrenched, rendering many of the human rights of the people meaningless. It is also very disappointing that respect for human rights has not been made mainstream in our education system, because human rights safeguards are not only about litigation and legislation, but also about ideas and values, which are formed and transmitted through the education system.”