Indiana and Religious Freedom for All

Indiana’s proposed Religious Freedom Restoration Act (RFRA) has stirred controversy in that it could make it easier for private entities to discriminate against minorities. The law would raise the standard of scrutiny for discrimination cases, defending potentially discriminatory actions in court under the guise of religious freedom. 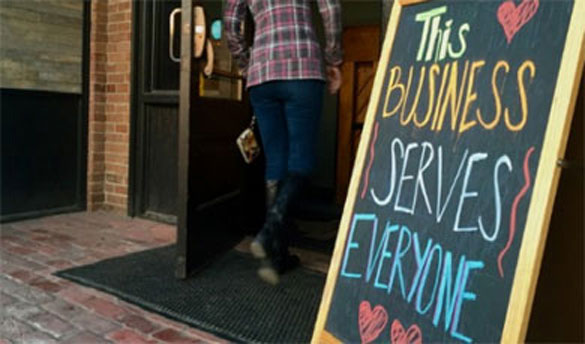 This law brings up an interesting conversation that must be had within the American Muslim community. Should this law pass, a painter may refuse to paint a mosque, citing a belief that serving Muslims may threaten America and his Christian faith. Of course Muslims would be against this, hopefully on the principle of being anti-discrimination. That principle must apply when the rights of others are violated. For example, would we stand up for a Jewish family denied a table at a restaurant, or a gay man not being granted an interview because of his lifestyle? If we consistently apply anti-discrimination, we would be against injustice against anyone. The litmus test is whether we can stand for equity even if it does not serve our political interests or align with our personal understanding of faith.

The United States is a secular democracy. By choosing to live here (even if we were born here), we have the privilege to benefit from its freedoms. We can practice our religion in any way we please. By choosing to live here, we also agree to abide by the inclusive nature of the nation. In pursuing our rights, we must be willing to extend those same rights to those we disagree with. If we want to spread good, we must do it individually, lead our families, and inspire our communities. Political pressure or hard-handed compulsion on social matters is usually ineffective, if not immoral, and frequently backfires.

Can we live in a society where we can be strong Muslims and ardent supporters for justice and equality? We see examples of the Prophet Muhammad allowing practices that he may have disagreed with. In Medina, Jews and Christians and polytheists were not only living in the city, but were subjected to their own laws and customs -- today we look at laws and customs of the other as inferior or as a threat to our religion.

The Prophet showed confidence, strength, and self-assuredness that allowed him to interact, live, and support those with whom he had theological differences. The greatness of the Prophet was not just fighting for the oppressed, but also fighting for the rights of the other even when he was oppressed. His goal was establishing mercy and human dignity. It is time for us to remember that the strength of Islam is manifested by being the source of defending the rights of others. That realization and actualization of religious freedom in Islam will be a vital contribution to America and to the advancement of American Muslims in aspiring to our civil rights.