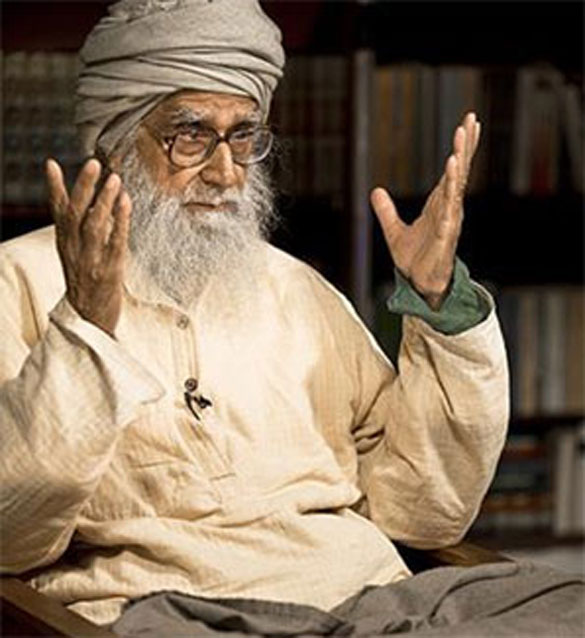 Maulana Wahiduddin Khan in a conversation with New Age Islam Special Correspondent on his new book, The Age of Peace

Q: You have already written a lot, including several books, on Islam and peace. Why did you feel the need for yet another book on the subject—The Age of Peace?

A: Yes, it is true that I have written many articles and books on the subject of peace, but this book is different in some significant ways. For instance, it covers several recent events. Also, there are many references in The Age of Peace which were not there in my previous books. No book closes the door to another book, because new developments keep taking place in history, and so books need to be written time and again.

My previous writings on peace were mostly with reference to Islam. For quite some time now, the notion that Islam is a religion of violence has become widespread. Hence, I wrote extensively on the subject of Islam and peace in order to dispel this prevalent notion about the religion of Islam. For example, the term ‘jihad’ was generally taken to mean military action. Through my writings, I explained that jihad truly means a peaceful ideological struggle.

The focus of the present book is not on Islam, but on the present age. The fighting that happened during the time of the Prophet of Islam was due to the age factor—the conditions that prevailed in that age. That is, the advent of Islam happened in a tribal age, and the culture of a tribal age is that of war and violence. Through my study, I realized that several changes have come about in the modern age. Whatever was earlier attainable through military power can now be attained, and with greater success, through peaceful means. Therefore, no reason remains to indulge in fighting and war. This was the reason why I decided to title this new book as The Age of Peace.

Q: What other new points have you highlighted in this book that you had not addressed in your previous books on peace?

A: In this book, I have written in detail on the concept of ‘de-monopolization’, which I had not dealt with in my earlier writings. Although the word ‘de-monopolization’ exists in the dictionary, it has been given a reduced definition. I have defined ‘de-monopolization’ in a new way in this book. I have shown that in the modern age, the word ‘de-monopolization’ has acquired a comprehensive connotation and we can say that the present age is an age of de-monopolization. In previous ages, might was considered to be most important—as the saying went: ‘Might is right’. A landlord, a political ruler or a person possessing any kind of power was believed to be in a position where he could do almost anything. Such people had a monopoly over things. But in today’s age, this concept of monopoly has become obsolete, and another concept has taken its place—that is: “Everything for everyone.” There is a great abundance of opportunities today that everyone can avail of, using peaceful methods. No longer is there a monopoly of only some people over such things.

In today’s age, the most important thing is wise planning, not political power. If a person knows how to wisely plan, he can, using peaceful means, attain everything which in the earlier age was regarded as possible only through military power and force. For example, in the Age of Colonialism, which was driven by the desire for commercial exploitation, the colonial powers considered controlling other territories as necessary. The colonial nations were basically commercial exploiters. But today this commercial gain can be achieved through means other than conquering other territories—for example, through outsourcing, investment, and so on. Today, there are many big companies which secure their commercial interests at a global level but do not own any army. The means that they employ for carrying out their activities are outsourcing and investment.

This is an example of the phenomenon of de-monopolization that has come to characterize the present age. In earlier times, powerful people could enjoy monopolies, but today the same advantage can be achieved by all through wise planning and organization, using peaceful means.

Q: Can you please summarize the basic arguments of The Age of Peace?

A: People generally live in an anachronistic mindset. Although the Age of War is over, some people still continue to advocate for, and engage in, war. In The Age of Peace, I have proved that such changes have been brought about in the present age that war has now become totally futile. Today, we can achieve more successfully through peace what people in previous ages could not have attained by resorting to war. The book stresses that now, in our age, violence or war is not a sensible option to obtain one’s goals, and that peace alone is the way for this purpose. The whole world is now a changed world. In this age in which we live, any good thing that you want to achieve can be had only through peace—there’s absolutely no need for violence and war for it.

In The Age of Peace, I have tried to show that a process has been going on for the past several thousands of years in human history. This process, according to me, was to replace violence with peace, or to make peaceful struggle the alternative to violent struggle. This process reached its culmination in the second half of the twentieth century. Those who now opt for the method of violent struggle to attain their goals are victims of an anachronistic way of thinking. The gist of the book is to make people aware of the spirit of the age and to re-engineer people’s minds along the lines of peace.

The benefit of this replacement of violence by peace is not only that violence would thereby come to an end in society and peace would prevail. A greater benefit would be that after this re-engineering, people would no more have negative thinking and would develop positive thinking in the complete sense of the word. And, positive thinking is most important for one’s personality development.

A point I repeatedly stress is that this is an age of opportunity explosion—a great abundance of opportunities. To avail of these opportunities, you must abstain from violence and you must use peaceful means. That’s the way you can succeed. In previous centuries, people lived in a tribal age, a despotic age. Opportunities were very limited, and people often resorted to war to obtain their goals. But now there’s no use of violence.

I also stress that we are today living in an age of weapons of mass destruction, and that war can only lead to horrific, mass-scale destruction. It can serve no positive purpose at all. And so, war has become irrelevant. It is an obsolete method.

It is my dream to make people aware of the spirit of this new Age of Peace. Most people are simply unaware that we are living in this sort of age. The problem is their unawareness of this fact, and I am seeking to make people aware of it. That is one major purpose of this book. I am truly hopeful that a day will come when people will become aware of the spirit of our age and will totally abandon violence and will opt for peace.

Q: The book is called The Age of Peace, but the reality seems quite the opposite. Violence is widespread today—not just in the form of war and terrorism, but also violence in society, in homes, in families, in people’s minds, maybe on a scale that did not exist before. So, on what basis do you call this an Age of Peace?

A: When I say that the present age is an age of peace, I mean it is so in terms of potential. If people are fighting, they are doing so on account of unawareness of the present age. I want to dispel this unawareness and make people aware of the potentials available to us today to work peacefully in every field.

When I say that today we are living in the Age of Peace, I do not mean it in the same sort of sense of someone who says that we today live in the ‘Age of Machines’. What I mean is that now, by following the peaceful course of action, all things are achievable to us, and in a much better way than by taking recourse to violence. I, therefore, want to explain to people who are engaged in violence that their case is one of anachronism—of living with the mindset of war and violence in an age in which one can attain all of one’s goals through peaceful methods.

It is my experience that if the importance of peace is properly explained to people, they realize its importance and change their thinking and methodology. Earlier, people took to the way of war due to circumstantial compulsion, but if they do so now, it is out of unawareness. If this unawareness is removed, they will come to the path of peace.

Q: Today, one of the greatest challenges to world peace are terrorist groups misusing the name of Islam to foment brutal violence in the name of jihad. If this is truly to be an Age of Peace, how do you feel these groups and their ideology can be countered and defeated?

Q: Are there any plans to have The Age of Peace translated into other languages, including Arabic and Urdu?

A: Yes, we would like this book to be translated into Arabic and other languages. We will try our best to do so with the resources available to us, and others are also welcome to support us in this endeavour.

Q: Today, there are some extremist groups, particularly among Muslims and Christians, that claim that the Doomsday is round the corner and they talk of what they claim is an impending global war that, they say, will herald the arrival of the Day of Judgment. Given that you say that this is the Age of Peace, how do you look at these claims of these ideologues?

A: I think that the claim that there will be a global war in the physical sense is wrong. It is true that there are some traditions in books of the Hadith which say that a time would come when evil would come to an end and the truth would become dominant. However, this prediction will not come true in the sense of governmental rule, but in terms of ideology. In the Hadith the word Hujjat has been used. It means that the truth will supersede untruth and evil by way of reason.

This task is practically being carried out in the form of a process. For example, in the modern age, the discoveries of theoretical science are helping to confirm the veracity of the teachings of Islam. The prediction of this was given in a verse of the Quran (41: 53). This phenomenon is mentioned in the Quran as Izhar (48:28). Izhar means to cause religious truth to prevail. Commentators of the Quran, such as al-Razi, have taken it in this very sense, that is, to cause the truth to prevail at the ideological level.

To procure a copy of The Age of Peace, please contact info@cpsglobal.org

The book can be downloaded free of cost from ​