Jogendra Nath Mandal Must Be Seen In Context of Partition, And a Failed Dream

The political career of Jogendra Nath Mandal (1904-1968) encompasses many dimensions. Before 1947 he was variously a supporter of the Indian National Congress, the West Bengal head of Babasaheb Ambedkar’s All India Scheduled Caste Federation and also a minister in the Muslim League governments in Bengal from 1945. His political efforts can also be seen to be directed towards creating an autonomous Dalit space in Indian politics separate from the Hindu-Muslim binary and the Congress-League divide. 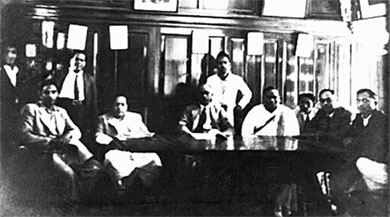 Mandal (third from right) with B R Ambedkar (second from left).

He was selected by Mohammad Ali Jinnah to be a minister in the interim government of India just before Independence. Post-August 1947, he was the first Chairman of Pakistan’s Constituent Assembly and thereafter a minister in its federal cabinet as the only minority representative in it. For some of Pakistan’s embattled liberals today, Mandal’s presence in the first cabinet represented that elusive hope of a genuinely liberal and non-denominational Pakistan that subsequent events so spectacularly belied.

Mandal was to continue in the Pakistan Cabinet till his resignation in October 1950. He simultaneously renounced his allegiance to Pakistan and settled in India, where he was to spend the rest of his life in relative obscurity. This was in effect a very public confession of a colossal error of judgment that Scheduled Castes could receive a fair deal in Pakistan.

Whatever may be the different perspectives on Mandal, it is the act of first choosing Pakistan and then the renunciation of that choice that has formed the defining narrative of his life. The issue was not so much of a Scheduled Caste or a Hindu staying on in Pakistan or occupying a high office in its government. Despite the comprehensive ethnic cleansing that took place in West Pakistan, in East Pakistan (or divided Bengal), very substantial minority populations remained post-1947. There were also former congressmen in the provincial legislature and the federal constituent assembly. Some of them grouped themselves into the newly formed ‘Pakistan National Congress’. Nevertheless Mandal stood in a different category — more than a minority representative marooned in Pakistan because of a larger geo-political shift that the Partition of India represented. Possibly he felt that if Partition was inevitable, then in Pakistan, free from the perceived domination of upper castes of the Congress and Indian politics, an

He, of course, was to be disappointed, and the emerging structural characteristics of Pakistan politics made his an impossible dream. Maintaining a distinction between higher-caste Hindus and Scheduled Castes was difficult given an all-encompassing Pakistani meta narrative of the Hindu-Muslim divide. Post the ethnic cleansing of 1947, the vast numbers of Hindus in Pakistan, including the Scheduled Castes, were now concentrated in East Pakistan. The Bengali-Urdu linguistic divide and federal issues between the eastern and western wings of the country overlapped a great deal with this minority factor. The East-West divides had also as a subtext the suspicion in Karachi that stronger federal features would mean empowering the minority population in East Pakistan and this would, or so it was felt, strengthen India. The India factor was also never absent in any discussion in Pakistan about minorities.

These contradictions would mature and come dramatically to the surface only between 1965 and 1971. They were nevertheless strong enough to ensure that the independent political space and social advancement that Mandal sought for the Scheduled Castes of East Bengal would remain an impossibility.

Mandal’s final days in Pakistan in 1950 coincided with a period of great trauma for minorities in East Bengal. His letter of resignation to Prime Minister Liaqat Ali Khan brings out that the distinction between upper and Scheduled Castes that he had sought to maintain in his politics was now impossible to maintain in the face of an onslaught of violence and ethnic cleansing: “I have come to the conclusion that Pakistan is no place for Hindus to live in and that their future is darkened by the ominous shadow of conversion or liquidation”.

Coincidentally, Mandal’s mentor Babasaheb Ambedkar resigned his Cabinet position in India the following year. But the commonality ends there, as the Ambedkarite legacy remains a cornerstone of the Indian polity and its politics. Mandal on the other hand has retreated into becoming a more shadowy figure. The differences in the political structures of India and Pakistan account for this: There is no politics of diversity in Pakistan — minorities are not a political factor there, while in India they are.