2.    Hindu-India is on the lookout for an excuse to harass and humiliate Muslims. 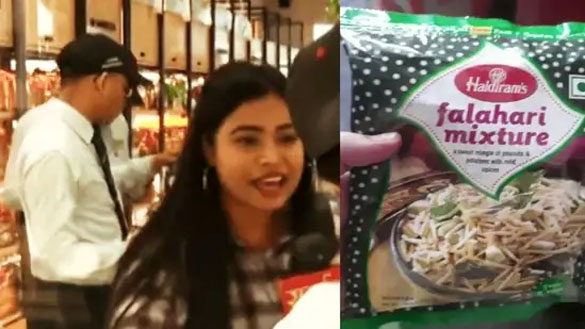 The Sudarshan News TV reporter claims Haldiram wants to hide "something" and promote "something",

The meaningless row over the Urdu (actually Arabic) inscriptions on a Haldiram product is yet another sign of ever-growing religious polarisation and humiliation of a community ( read Muslims). This gulf is alarmingly widening. It seems that the Hindu-India is on the lookout for an excuse to harass and humiliate Muslims. The 'reverse' script of Urdu is now on the radar of the neo-Hindus, though most of them cannot even discern between Urdu and Arabic rasmul-Khat (script). To them, any language written from right to left is a 'reverse tongue' (ulti Zabaan) and belongs to Muslims!

These blockheads don't know that even Hebrew, Armaic and Sindhi are written from right to left and belong to Jews, Christians and Hindu (Sindhis) respectively. The ancient Indo-Iranian script Kharoshthi was written from right to left.  Seeing me read and write Urdu, Persian and Arabic, many Hindus ask me why on earth do I opt for these 'Muslim' languages! I just smile because as we say in Persian, Jawaab-E-Jahilaan Baashad Khamoshi (the best reply to a fool's query is silence).

Now the point is: Why is this Islamophobia spreading like a conflagration? Hijab, Halal, Azaan, Urdu all have become eyesores to the majority. Granted, all these, barring Urdu, are totems and external religious symbols, but then, Hindus also follow totems. Almost all humans, being somewhat devolved, fall for religio-scriptural totems because religious symbolism is inveterate in humans. But here the context is rather different. A false narrative of Islamic oppression is being drilled into the collective psyche of Hindus.

State-sponsored 'pseudointellectuals' and over-nationalists like Manoj Muntashir, Neeraj Atri, Tariq Fateh, among others are painting a distorted picture of Muslim excesses and forcible conversions in the past. Though all is not false, a large chunk of it can certainly be called spurious. For example, Manoj Muntashir (I don't know whether he's a lyricist or a 'historian') recently claimed in Ujjain that 35 lacs people died of poverty when Shahjahan got the Taj Mahal built, spending 9 crores and he had the hands of the artisans (who built Taj) chopped off (this is a widespread misnotion among the Hindus of India, though Manoj Muntashir certainly DIDN'T mention the last concoction regarding the mass amputations in his ironically 'brilliant' statement!).

These are blatant lies, not corroborated by any history book or historian worth his/her salt. But nowadays, the 'immortal' words of such Wikipedia 'scholars' are taken as Oracular or Gospel Truths by the gullible and bovine masses. Ergo, a general perception among Hindus has got rooted and internalized that ' Muslims were invaders and mass rapists.'

Now the dormant Hindu consciousness is being fanned by repeating the Goebbelism of ' thus far subjugated, but now resurrected.' The Sanatani Hindus (a stupid term that emerged after the killings of rationalists Like Dabholkar, Kalburgi, Pansare and Gauri Lankesh) are justifying their atavistic aversion to Muslims by citing obscure episodes of Hindu-bashing by Muslims from the crevices of unverified history. This 'settling-the-old-scores syndrome' is engulfing the whole Hindu community, which's now at loggerheads with Muslims at every step and action. This doesn't bode well for the country and will lead to complete polarisation and anomie. But who cares?

Lastly, British historian Sir Arnold Toynbee's ' Perceived Pre-emptive Persecution Syndrome ' (PPPS) can be mentioned here in the resurgence of militant Hinduism. Toynbee wrote that' When a community or a race thinks (often fallaciously) that it was persecuted by a much stronger adversary in the past, it (the oppressed community) may again be persecuted in future by the same adversary. So, before the adversary again subjugates them, it's better to subjugate the adversary.' This cannot be denied that embedded somewhere in the consciousness of Hindus is the fear of persecution by the Muslims. So, Muslims are being attacked and thwarted by all means.

At the same time, you cannot brush off the fact that the present political dispensation's tacit consent in all these shenanigans and shebangs is aggravating the whole issue all the more. The rabidly zealot politicians are emboldening and instigating all lumpen elements and they're having a field day.