Buddhism is not racist. The ideas and practice of Buddhism involve meditation, perception of impermanence and ultimately what we would call a renunciation of self. Being a Buddhist, however, is not just that. Being a Buddhist fundamentally involves taking refuge in three things – the Buddha, the Dhamma (his teachings) and the Sangha (the community of practice). As a Buddhist, this is why the violence in Aluthgama is so troubling. Becomes it comes cloaked in the colors of the Sangha. The main racists and instigators of mob violence are monks.

The Dhamma on Racism

The teachings of the Buddha, namely the Dhammapada, literally say nothing about race. Race, as we know it, is a somewhat modern concept but divisions between people are nothing new. What the Dhamma does talk about is caste. The Buddha taught and associated with everyone who came to him, kings and outcasts, men and women, gentlefolk and thieves. In his day caste was very powerful, especially the Brahmins. Those are the sections which I think are relevant to what we call race, or religion. 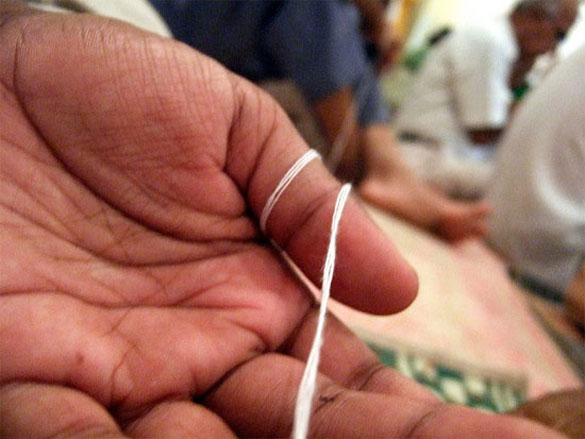 Pirith string at a Sarvodaya ceremony

There’s an entire chapter of the Dhammapada devoted to what a Brahmin really is, essentially turning the whole system on its head. I’ve include a few verses here, I recommend reading the whole thing. The Buddha’s words are remarkably concise. In fact, most verses are the size of a Tweet.

By birth one is no brahmin,

In whom are truth and Dhamma too

pure is he, a Brahmin’s he.

What’s the coiled hair for?

For what your cloak of skins?

Within you are acquisitive,

In whom there is no wrong-doing

by body, speech or mind,

in these three ways restrained,

that one I call a Brahmin True.

true and gentle too,

who gives offence to none,

that one I call a Brahmin True.

If I may offer my unenlightened commentary, my impression here is that being a Brahmin is not something you’re born into, or something you get by virtue of your clothes. It is your actions and – above all – your self-control that makes you virtuous.

as with chariot away,

that one I call a charioteer,

others merely grip the reins.

As you can see, there’s nothing within Buddhism that gives pre-eminence to any race or caste, or even monks. You are encouraged to venerate and support enlightened bhikkus and arahats, but it’s by virtue of their actions that they are evaluated, not simply their titles or appearances. There’s another chapter on monks detailing what makes one a successful bhikku, and it’s not simply donning the robes.

in speech as well as head controlled,

speaks wisely and who is not proud,

who theory and practice can expound,

sweet as honey is his speech.

For whom there is no making ‘mine’

towards all name and form,

who does not grieve for what is not,

In all ways, the Buddha I know was focused on the path, on action and on personal activity and hard perception. The dhamma was not something you got and carried around, it was something you strive for and perfect every day. This is something I struggle with still. Being a Buddhist is not comforting in itself. It’s not something you can sit on and be proud of. It’s a path and, to be honest, an arduous one.

Another vital point is that Buddhism rejects both the idea of self and no-self. Even at the weak levels of meditation that I’ve experienced, you can see that whatever you perceive is impermanent and not objectively real, at least not in a way that merits worrying about or getting attached to. That includes this idea that I, Indi Samarajiva am a self distinct from my environment and also the idea that I, Indi Samarajiva, am not. That logic, by extension, necessarily rejects race and caste as constructions of illusion upon illusion.

That is the vital point which makes Buddhist Racism an oxymoron, but the Buddha was prescient enough that he offers a lot more direct advice on the problems Sri Lanka is facing today. Namely, people who claim priority based on who they are rather than what they do.

Another relevant discourse which I only found in the course of looking this up is the Vasala Sutta, the discourse on outcasts. As the Buddha was begging for alms in Savatthi, a brahmin yelled at him saying

“Stay there, you shaveling, stay there you wretched monk, stay there you outcast.” When he spoke thus the Blessed One said to the Brahman: “Do you know, Brahman, who an outcast is and what the conditions are that make an outcast?”

Again, the Buddha turned the definitions of the time (which were based on birth and largely just were) on their head. His definition of outcast was, like a Brahmin, based on your actions and choices. There are many things listed in the sutta (many of which you and I are guilty of), but the first three are pretty bad and I think applicable to the BBS.

1. “Whosoever is angry, harbours hatred, and is reluctant to speak well of others (discredits the good of others), perverted in views, deceitful — know him as an outcast.

2. “Whosoever in this world kills living beings, once born or twice born, in whom there is no sympathy for living beings — know him as an outcast.

3. “Whosoever destroys and besieges villages and hamlets and becomes notorious as an oppressor — know him as an outcast. (Vasala Sutta)

Now, I have been angry, I have lied, I have been unkind but I can, in all honesty, say that I have never destroyed or besieged a hamlet. That is exactly what the BBS and their pseudo-Buddhist mobs have done in Aluthgama and all over the island. This is not to point fingers and say that I am better than them (though I think I am cause, you know, people were killed in Aluthgama), but simply to say that the Buddha would see right through their robes to the outcasts within. As he said, “Not by birth is one an outcast; not by birth is one a brahman. By deed one becomes an outcast, by deed one becomes an brahman.”

The deeds of the BBS and their supporters in terrorizing, assaulting and killing Muslims and people different from them are truly repugnant, and truly contrary to the Dhamma.

The Sangha and the BBS

As a Buddhist it makes me so very sad to see crude, vile and frankly untamed men like Gnanasara Thero in robes, practicing such harsh speech, inciting hatred against Muslims and actually being violent. It makes me sad because I do take refuge in the Buddha, in the Dhamma and the Sangha.

I have learnt from wonderful monks, from wonderful lay Buddhists (like my mother) and that community of practice is a refuge in a harsh and confusing world.

Mobs in robes like the BBS feel like they pollute that community, like they shame it, like they shame us in front of the world. I honestly find what they’re doing far more detrimental to Buddhism than the Buddha Bar or a tourist with a Buddha tattoo.

It is a false comfort, however, to say that the BBS is bad and we’re better than them. The mind-loop of Buddhism is such that it rejects such comfortable ‘truths’, any comfortable perception actually, everything has to be questioned.

The BBS and their like deserve our compassion understanding and love, even as they abuse, beat and murder fellow Sri Lankans. Which is, honestly, a hard idea to swallow, but that’s what the Buddha said a true Brahmin is.

He used the word Brahmin cause those were the words of his time, but you could just as easily say Sinhala Buddhist or whatever you hold dear. Whatever you hold dear, whatever identity whatever affiliation, you need to re-evaluate whether that gives you special rights and privileges. That illusion leads to suffering for other people and ultimately yourself, hanging onto some thread, some category like that’s going to carry you through the whirlwind of this existence. What really matters is not your identity but your actions. How you live your life. How you treat other people. That’s what the Buddha said.

I’m a Sinhala Buddhist and I reject any advantages and rights this supposedly gives me over this island or over anything. The only definition that mattered to the Buddha was our actions – not who were are or where we come from. As Sri Lankans, as Buddhists, we need to live by our actions.

We need to comfort and support our Muslim, Christian and whatever brethren now. They need to know that they’re not alone and that mobs aren’t free to kill them and burn their homes. We need to offer them our words, our compassion and if need be (God forbid) our walls and homes. Sri Lanka has been through hell and we know all too well the suffering that hatred and ignorance brings to everyone, the victim and perpetrator alike. As a Sinhalese, as a Buddhist as, ultimately, none of the above – I reject any hoodlum in robes saying that their anger and their violence has anything to do with me.