Religious fundamentalism among Muslim immigrants in Western Europe is dramatically greater than that among Christian Europeans, according to a recent study by Ruud Koopmans from the Wissenschaftszentrum in Berlin discussed on the Monkey Cage last Friday.  On the surface, these findings legitimize concerns surrounding the incompatibility of Western and Islamic values.

Like Europeans, Americans express fear over Muslim integration and Islamic fundamentalism, although very little is known about beliefs among Muslims living in the U.S.  A recent nationwide survey of U.S. Muslims, which I designed, provides some insight — the Muslim-American National Opinion Survey (MANOS) reveals that levels of religious fundamentalism among Muslims and Christians in the U.S. are nearly identical.

As one of the few nationally representative surveys available of Muslim Americans, MANOS provides insight into the degree Muslim Americans hold fundamentalist views, as defined by Koopmans.  Data from existing surveys of the general American population allow me to assess where Muslims stand relative to other Americans in believing that religious rules are more important than the laws of the country and the degree individuals hold literal interpretations of holy scriptures. 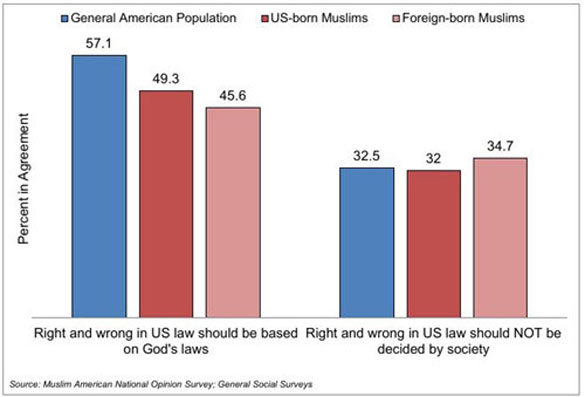 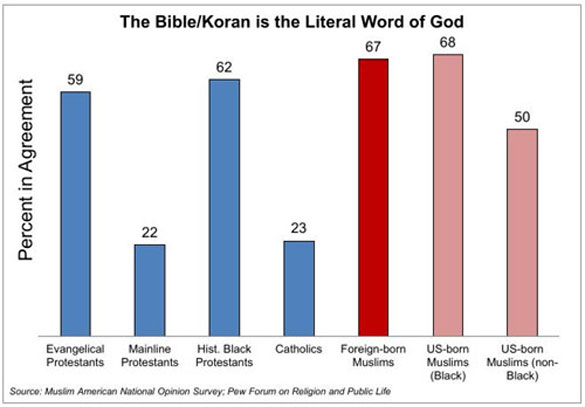 Why Less Of A Gap In America?

The connection between affluence and the decline of religious belief is well-established in the social sciences.  Major socioeconomic differences between Muslims in the U.S. and Muslims in Europe may be one piece of the puzzle explaining different levels of fundamentalism between the two groups.

This high-skilled migration flow to the U.S. stands in contrast to the low-skilled labor immigration that Western Europe attracted following World War II to help rebuilding efforts. More immigrants were later admitted into European countries to meet rapid economic growth, allow family reunification and provide asylum.  Muslims in Western Europe have had significant issues with poverty and integration, making up around 20 percent of the low-income population, compared to 2 percent among U.S. Muslims.

Koopmans argues that fundamentalism is associated with feelings that one’s “own group is seen as threatened by outside enemies.”  Consistent with this expectation, the more fundamentalist, general American population is significantly more likely to believe that Islam, compared to native Europeans.  Similarly, European Muslims are 15 percent more likely to believe that the West is out to destroy Islam compared to American Muslims.

Even with American Muslims holding more positive perceptions than Europeans, there is still work to be done to foster more positive Muslim-American relations. My recent study finds that after more time in the U.S. and across successive generations, Muslim Americans are increasingly expecting unfair treatment of Muslims by U.S. law enforcement. Basically, I find that as Muslims become more familiar with American institutions, they become more aware of anti-Islamic discrimination and hostility in the U.S.

Altogether, these findings suggest that levels of religious fundamentalism can be found equally among Muslim and Christian adherents in the United States. Issues of out-group fears may be of less a concern however in the U.S. case due to the stronger socioeconomic position of American Muslims and more successful integration.

This is a guest post by Rachel Gillum, a PhD Candidate at Stanford University. Erik Voeten.