Happy Rosh Hashanah - The Jewish New Year: Jews And the Muslims Of the Gulf Can Truly Live Together In Friendship And Trust

Rosh Hashanah, the Jewish New Year, which will usher in the Jewish year of 5781, begins on the evening of Friday, Sept. 18, and commemorates the anniversary of the creation of the universe. As is appropriate for a holiday commemorating what Jews consider to be the penultimate divine act, its canvas is the entire world, all of humanity. 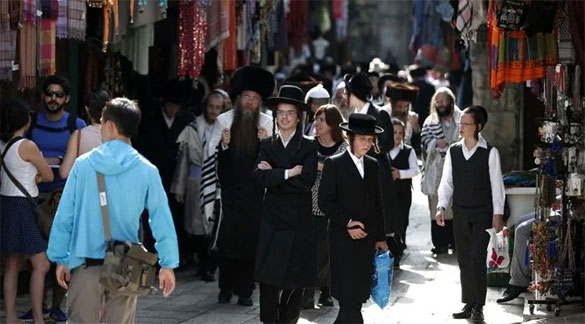 Jewish ultra-Orthodox walk on a street in the Muslim quarter of the Jerusalem's Old City, on October 5, 2015. (File/AFP)

For Jews, Rosh Hashanah is a time of introspection and self-examination, during which we reflect on the good and the bad that each of us have done over the past 12 months and resolve to do better in the coming year. Specifically, we resolve to be just and compassionate to people of all faiths and nationalities, according to the aphorism of Rabbi Hillel, a first-century sage: “What is hateful to thee, do not do unto your fellow man. This is the whole law; the rest is mere commentary.”

For the growing Jewish communities of the Gulf, this is a joyous time to reflect on the blossoming of Jewish life with the support of enlightened governments in this region. As the “Rabbi to the Gulf” who worked hard for more than a decade to bring about this blessed result, I share in the euphoria. However, this Rosh Hashanah, I respectfully urge the Jews of the Gulf to look beyond the Jewish community to the challenge of coexisting positively with the overwhelmingly Muslim populations among whom they are living. We must appreciate the positive steps forward that we are seeing in the Gulf when it comes to their embracing our religion. For example, I appreciate how Arab News is breaking taboos by publishing articles from Jewish leaders. Personally, I was honoured to be asked to write an op-ed that was published on the front page of the paper the day after the UAE-Israel announcement and then again last week after Bahrain and Israel announced their deal. They also published a special “Deep Dive” report on the Jews of Lebanon last week on Sept. 12.

Indeed, The Jews Of The Gulf Have A Unique Role: To be ambassadors from our people to the larger Muslim world. They must endeavour to reach out to their Muslim brothers and sisters and build lasting ties of communication and cooperation. Together, the Muslims and Jews of the Gulf can set an inspiring example to our brethren around the world, showing them that interfaith communities can truly live together in friendship and trust. Let us accomplish this together in the spirit of Rosh Hashanah, which celebrates our common humanity, and of the recently observed Muharram, the Islamic New Year.

During this season of reflection and repentance, the rabbis eulogize human beings’ ability to cast off obsolete ways of thinking and fundamentally change their actions for the better. In that context, let us reflect on the many positive changes we have witnessed in the Gulf over the past 12 months. Just think about the amazing things Muslims and Jews can accomplish together in the years ahead, such as overcoming the coronavirus disease (COVID-19) and other serious illnesses in the Middle East and beyond, or applying advanced irrigation techniques to green the desert and increase food production for the benefit of all of humanity. The possibilities are limitless.

Rabbi Marc Schneier is President of the Foundation for Ethnic Understanding.

Original Headline; Muslims and Jews of the Gulf can set an inspiring example