Polytheism or Monotheism, Hindus, Muslims or Christians - The Aim of Life is Salvation, Moksha and Forgiveness

Religions May Seem To Differ From Each Other but At the End, All of Them Revolve Around the Same Essence of Winning a Heavenly Life Hereafter

2.    Every act of kindness, compassion and love for the fellow human being is a form of worship to God that is returned by Him in the forms of rewards in here and hereafter.

3.    Worship is religious beliefs, social activities and contribution to the welfare of society and fellow human beings.

4.    Each of us is born with a natural belief in the ‘Oneness of God’ that is called a state of ‘Fitra’ in Arabic. 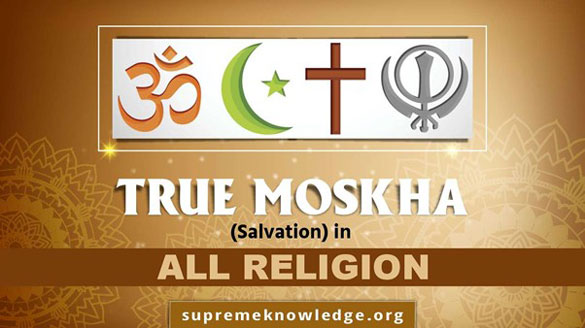 Religions may seem to differ from each other but in the end, all of them revolve around the same essence of winning a heavenly life hereafter. All the religions command their followers either through their holy books or through their prophets to acknowledge the greatness of their lords in every aspect of life. The religions expect their followers to ask for forgiveness of the misdeeds committed by them to rectify their mistakes and hope for a divine life after they are gone from this world. Human beings quest for a heavenly life is remembered with different names as Moksha in polytheistic religions and Allah’s Forgiveness (بخشش) in monotheistic religions.

Allah the Most Gracious and the Creator of the whole universe has ingrained our personality with His remembrance, love and worship. Worship to our Creator with the belief in His Greatness is the core of all the traits that the followers of all the religions believe. Humankind’s life in here and hereafter is based on His remembrance and His ‘forgiveness’, call it ‘Moksha’ in Hinduism, ‘Resurrection’ in Christianity or Allah’s Forgiveness (بخشش) in Islam.

The universe, this planet earth, nature, the environment and all other things that it consists of is a mystery for us. The scientific and technological inventions, the social norms and our religious cultural duties are all performed by us on the guidance of Allah, the Creator as we ask for His guidance in prostration or otherwise. Those among us who ask for the Creator’s mercies are granted the power to perform their duties in the interest of His people. Those are the people who take the route of ‘service to His people to receive His blessings are thus blessed with rewards in here and hereafter.

Every religion stresses worship to receive the blessings of the Creator of the universe. Consider the following verses from the Holy Quran and Bible and Shloka from the Bhagwad Geeta and Guru Granth Saheb:

“Neither is there salvation in any other: for there is none other name under heaven given among men, whereby we must be saved.” - Acts 4:12

"Those who meditate on God attain salvation. For them, the cycle of birth and death is eliminated." When God judges that the soul is ready, he allows it to merge with him after death. (Guru Granth Sahib)

All the prophets, Auliya, Sufis, Rishis and all other religious leaders have stressed the need to prostrate in front of God to receive His forgiveness, salvation and Moksha, whatever words we use, for a heavenly abode hereafter that is the aim of every human soul on earth.

But there are various other ways of worship to Him other than that meets our eyes. Every act of kindness, compassion and love for the fellow human being is a form of worship to God that is returned by Him in the forms of rewards in here and hereafter. Allah the All-Knower, guides us on to the righteous path and creates easiness in our works when we tread on the path of His commands. According to Islam and all other religions, worship is the act that is performed for the pleasure of Allah, the Creator of this universe and everything it contains.

Worship is religious beliefs, social activities and contribution to the welfare of society and fellow human beings.

Ask for Allah’s Guidance and He Bestows upon You

Allah has blessed us with innumerable ingrained qualities of positivities like wisdom and intellect and has commanded us to use them according to our understanding. The human being is capable of much more than what he achieves by using His bestowed intellect on His guided righteous path. Take the example of our mind, scientists say that it weighs about 3 pounds and contains around 10 billion neurons (cells that carry information). It is an unsolved myth but it is said that no one, including the greatest of the scientists and social scholars, has ever been able to use more than 10 per cent of their brain capabilities. In the light of this myth, we can rest assure as the saying goes, ‘sky is the only limit’. Consider the following verse of the Holy Quran in which Allah, the Most Gracious says:

...He would have made you one community, but His Will is to test you with what He has given you. So compete with one another in doing good. To Allah, you will all return. — Quran 5:48

Therefore learn from the signs of Allah and use the intellect and wisdom granted to you in the righteous path for His forgiveness and heavenly life hereafter.

The Verses from the Holy Quran, the Bible and Shlokas from the Bhagwad Geeta and Guru Granth Saheb describing the aim of life and the way of achieving it.

Verses from The Holy Quran on One’s Aim of Life

…Who has created life and death so that He may try you which of you are best in deeds… - The Holy Quran 67:2

And among the people there is he who sells himself for the pleasure of Allah, and Allah is Kind to His worshippers.  - The Holy Quran 2:207

“And to Allah belongs the dominion of the heavens and the earth, and Allah is over all things competent.” - Quran 3: 189)

“And We have already created man and know what his soul whispers to him”. (50:16)

[Remember] when your Lord extracted from the loins of Adam’s children their descendants and made them testify (saying): ‘Am I not your Lord?’ They said: ‘Yes, we testify to it.’  (Quran, 7:172)

“Know that the life of this world is but amusement and diversion and adornment and boasting to one another and competition in increase of wealth and children ... (Quran 57:20)

“Satan’s plan is to incite enmity and hatred among you with intoxicants and gambling, and hinder you from the remembrance of Allah and regular prayer. Will you not then abstain?” (Quran, 5:91)

(The Hour shall come) that He may reward those who believe and do righteous deeds. Theirs shall be forgiveness and a generous provision. - (Q34:4)

As for those who worked against Our Signs in order to frustrate them, they shall suffer a painful chastisement. - (Q34:5)

(O Prophet), those who have knowledge see clearly that what has been revealed to you from your Lord is the Truth and directs to the Way of the Most Mighty, the Immensely Praiseworthy Lord. - (Q34:6)

Verses from the Holy Bible

“For by grace you have been saved through faith, and that not of yourselves; it is the gift of God, not of works, lest anyone should boast.” - Ephesians 2:8-9

“For He made Him who knew no sin to be sin for us, that we might become the righteousness of God in Him.” - 2 Corinthians 5:21

"Truly, truly, I say to you, whoever hears my word and believes him who sent me has eternal life. He does not come into judgment but has passed from death to life." - John 5:24

"Pray then like this: “Our Father in heaven, hallowed be your name. Your kingdom come, your will be done, on earth as it is in heaven. Give us this day our daily bread, and forgive us our debts, as we also have forgiven our debtors. And lead us not into temptation, but deliver us from evil." - Matthew 6:9-13

"Behold, I stand at the door and knock. If anyone hears my voice and opens the door, I will come into him and eat with him, and he with me." - Revelation 3:20

"But that you may know that the Son of Man has authority on earth to forgive sins”—he then said to the paralytic—“Rise, pick up your bed and go home.” And he rose and went home. When the crowds saw it, they were afraid, and they glorified God, who had given such authority to men." - Matthew 9:6-8

"When the disciples heard this, they were greatly astonished and asked, "Who then can be saved?"  Jesus looked at them and said, "With man this is impossible, but with God all things are possible." - Matthew 19: 25-26

David said, “…for you have been my help, and in the shadow of your wings I will sing for joy.” How can you get to that place? Where, instead of wandering aimlessly through life, you’re actually singing for joy (or just making a joyful noise if you’re not the singing type)? (Psalm 63:7)

It is far better to discharge one’s prescribed duties, even though faultily, than another’s duties perfectly. Destruction in the course of performing one’s own duty is better than engaging in another’s duties, for to follow another’s path is dangerous. Bhagavad Gita 3.35

Abandoning all Dharmas (of the body, mind and intellect), take refuge in Me alone; I will liberate you from all sins, do not grieve.  (BG 18.66)

“After that one should properly search for the supreme place i.e. Satlok of that Supreme God. Having gone where, devotees do not return to the world, and the Param Akshar Brahm, from whom the ancient creation–nature has originated.”  (Bhagwat Geeta: 15-4)

The Lord is the provider of all peace and comfort. There is no other at all." (Guru Granth Sahib)

People of the world, don't berate death! Few know how to die Serve your Sovereign, and the path ahead will be easy to tread Tread the easy path, earn its fruits, and seek praise hereafter Offer the fruits you earn here, merge with Truth, and receive your earned honour In the Master's mansion, you will enjoy His love We wouldn't berate death if we knew how to die! (GG 579)

Human beings aim of life to achieve the Creator’s forgiveness and reward of heavenly life hereafter is the same irrespective of his religious beliefs. According to a Hadees each of us is born with a natural belief in the ‘Oneness of God’ that is called a state of ‘Fitra’, an Arabic word that is usually translated in English as ‘innate nature’ and then are divided into different religious beliefs according to our social disposition. Consider the following Hadees:

The Prophet of God said,

“Each child is born in a state of ‘fitra,’ but his parents make him a Jew or a Christian. It is like the way an animal gives birth to a normal offspring. Have you noticed any young born mutilated before you mutilate them?” (Sahih Al-Bukhari, Sahih Muslim)