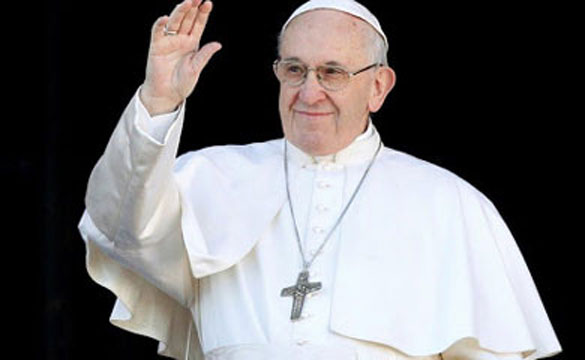 Pope Francis’ visit to Abu Dhabi has once again tried to take interfaith dialogue ahead. It is particularly significant because of its timing.

Today religious extremism and hatred have ravished the Middle East and Europe too has suffered.  Misunderstanding and misperception between the world’s two major religions are at their peak and religio-political wars have wreaked havoc in many parts of the world. In this situation, Pope Francis’ visit to Abu Dhabi and his meeting with representatives of Islamic world has raised some hopes of peace and harmony.

Pope Francis said in his speech that every word of hatred and religious extremism should be rejected and condemned and that enough is enough; the world should learn to live in peace and learn to respect the lives and beliefs of others. The Muslims have also appreciated Pope’s overtures to the Muslim world and expressed hope that the period of violence and hatred will be over soon and human beings will respect each other’s life and beliefs.

However, apart from the Vice-Chancellor of Al-Azhar Ahmad al Taiyab, no other prominent religious personality from Islamic world was present.  Al Azhar’s VC and the Pope signed a resolution on the need to fight extremism and terrorism in the world.  Pope Francis is well aware of the Arab world and its people.  The UAE has declared 2019 the year of religious tolerance and this visit of the Pope is a part of the yearlong program on the theme.

Pope Francis has been trying to bring the people of the two major religions, Christianity and Islam, closer despite differences in beliefs and practices. “We should build the future together or perish.  It is time religions played more courageous role and served the humanity.”

The holy Quran encourages interfaith dialogue and calls Muslims to settle issues with the People of the Book through dialogue. The Quran says that if people from other religions come forward with the message of peace, Muslims should reciprocate. But unfortunately, the Muslim world did not show much warmth on this occasion.

We should be grateful to the Pope that despite being the representative of a powerful religious community, he was humble enough to extend his message of peace and harmony. The Muslim world should also have turned this event into an opportunity to build bridges and remove misgivings.  According to news reports, Pope’s visit is the first in 800 years and so in this changed milieu, the visit has great significance.

The dialogue will, however, bear fruits only when Muslim countries also show the same degree of openness to Christians and other minorities within their boundaries. Presently, in most Muslim countries Christians and other minorities do not enjoy full religious rights.  As Archbishop Fitgerald pointed out, in Islamic countries the Christians have their churches and are also allowed to have mass but they do not have full religious rights there. In UAE, Christians can wear Cross and have churches but they do not have religious freedom as Muslims have in European countries.

This is despite the fact that the holy Prophet of Islam pbuh granted religious freedom to Christians through a letter to a team of Christian monks at St. Catherine’s, Mount Sinai (Egypt) in 628 AD. In that letter the holy prophet pbuh had granted full religious freedom to Christians under Islamic government anywhere in the world. Any persecution of Christians would be a violation of the prophet’s covenant. The declaration according to the Prophet pbuh must be valid for all time to come.

Therefore, during the conference, the issue of terrorism and extremist ideology also came up and the issue of persecution of Christians at the hands of ISIS and other religious extremist groups also came up and the Shaikh al Jamia denounced it and claimed that the groups and their ideology were un-Islamic but the real question is. Is merely declaring such groups and such ideology un-Islamic enough to serve the purpose? If we take a look at the declaration, we find that it talks of all the lofty ideals that have been repeated time again by our religious leaders from both the communities. We reproduce some of the excerpts below:

“We, who believe in God and in the final meeting with Him and His judgment, on the basis of our religious and moral responsibility, and through this Document, call upon ourselves, upon the leaders of the world as well as the architects of international policy and world economy, to work strenuously to spread the culture of tolerance and of living together in peace; to intervene at the earliest opportunity to stop the shedding of innocent blood and bring an end to wars, conflicts, environmental decay and the moral and cultural decline that the world is presently experiencing.

“We call upon intellectuals, philosophers, religious figures, artists, media professionals and men and women of culture in every part of the world, to rediscover the values of peace, justice, goodness, beauty, human fraternity and coexistence in order to confirm the importance of these values as anchors of salvation for all, and to promote them everywhere….

“Moreover, we resolutely declare that religions must never incite war, hateful attitudes, hostility and extremism, nor must they incite violence or the shedding of blood. These tragic realities are the consequence of a deviation from religious teachings. They result from a political manipulation of religions and from interpretations made by religious groups who, in the course of history, have taken advantage of the power of religious sentiment in the hearts of men and women in order to make them act in a way that has nothing to do with the truth of religion. This is done for the purpose of achieving objectives that are political, economic, worldly and short-sighted. We thus call upon all concerned to stop using religions to incite hatred, violence, extremism and blind fanaticism, and to refrain from using the name of God to justify acts of murder, exile, terrorism and oppression. We ask this on the basis of our common belief in God who did not create men and women to be killed or to fight one another, nor to be tortured or humiliated in their lives and circumstances. God, the Almighty, has no need to be defended by anyone and does not want His name to be used to terrorize people.”

But as we know our religious leaders have shown insincerity while dealing with terrorism and extremism. They have been saying one thing and practising something else. For example, we have come to know that the VC of Al Azhar practically believes in radical ideology of Islam justifying bloodshed and killing of non-Muslims. According to some reports in the media, Al-Tayeb's predecessor, Egypt's former grand imam, Sheikh Muhammad Sayyid Tantawi (d. 2010), had, "without even being asked, removed all the old books and left just one introductory book for Islam, [but] when al-Tayeb came, he got rid of that book and brought back all the old books, which are full of stories of slaughter and bloodshed.”  This shows the hypocrisy of Sheikh Ahmad al Tayyib and his insincerity in dealing with terrorism and extremism.

By the way, Egyptian scholars belonging to Al Azar have always been known for their extremist ideas. One of the most influential Egyptian Islamic scholars has supported Muslim terrorist organisations and their modus operandi including suicide bombing. During the Syrian conflict, he had appealed to the Sunni Muslims of the world to come to Syria and fight the Shias shoulder to shoulder with the ISIS. Earlier, he had supported suicide bombings resorted to by the ISIS, the Taliban and other terrorist organisation. Here is what he had said in a conference in Sweden in 2003:

"What weapon can harm their enemy, can prevent him from sleeping, and can strip him of a sense of security and stability, except for these human bombs - a young man or woman who blows himself or herself up amongst their enemy. This is a weapon the likes of which the enemy cannot obtain, even if the U.S. provides it with billions [of dollars] and the most powerful weapons, because it is a unique weapon that Allah has placed only in the hands of the men of belief. It is a type of divine justice on the face of the earth… it is the weapon of the wretched weak in the face of the powerful tyrant…"

The interfaith dialogue will not bear fruits until Muslim ulema do not change their mindset towards minorities and non-Muslims. All the efforts towards bringing peace between different religions will come to naught unless they give practical proof of their will to promote interfaith peace and harmony by removing hate material from madrasah or religious education material. Unfortunately, there seems to be no word to that effect from any quarter in the Islamic world.

To take the dialogue to a fruitful level, the Islamic countries need to do more. They need to restructure their theology and reinterpret their scriptures to reject the extremist ideology from every sphere of religious lives of Muslims. Only granting the minorities the freedom of worship was not enough as the Pope underlined but to grant them full religious liberty in the truest sense of the term. The Muslim world needs to take practical steps to remove hatred and bloodshed from its religious canon rather than only paying lips service in the name of interfaith dialogue.