Pope Francis Touches The Soul Of The Qur’an By Seeking An Adequate Interpretation: Muslims, Their Ulema And Scholars Across The World Must Follow His Suggestion To Avoid Growing Confusion In Religion 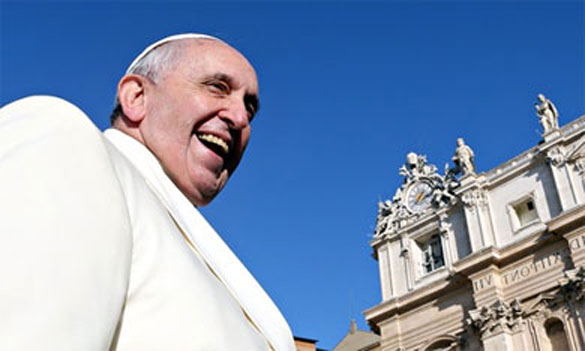 The Classical approach to understanding the message of the Qur’an that dates back to around the third century of Islam is through reading the Tafsir corpus which are drawn on the secondary sources of Islam, namely, the Hadith, the Sira, including the opinion (Rai) of past scholars, and the consensus of scholars (Ijma). The Mufassir (exegete) attempts to explain each verse of the Qur’an in light of these secondary sources or based on his own knowledge, doctrine, speculations and choice of source material. This renders Qur’anic exegesis a highly porous domain as the same verse can be interpreted differently by different Mufassirin engaging a different Hadith, Sira report, and opinion, or consensus of scholars (Rai, Ijma);and holding differing doctrinal orientation and worldview.

This in turn leads to enormous divergence and even contradiction in understanding what the Qur’an has to say on any given theme – the dress code for women, inter-faith relations, business practices, lawfulness of various bounties of God like song and music, governance of society, educational system and choice of profession and business pursuit, marriage, divorce laws for example. With changing paradigms of civilization and entry of new products, methods of production, and advancement of science, technology and proliferation of branches of knowledge, the Tafsir sciences are constantly stretched to explain all things ‘new’ that are not spelled out in the Qur’an by digging into the encyclopaedic and inexhaustible secondary domain of Islamic theology. In fact there is such an enormous wealth of theological knowledge in the Tafsir domain that “different individuals, agencies, groups and states can pick conveniently to legitimize their views and deeds in the whole range of matters concerning their societies. Such matters could be of social, political or theological nature, or pertain to statecraft, educational curriculum and women’s status, for example. Likewise, they will be able to enter into polemics, and have their clerics pass Fatwas against conflicting views on all such matters” [1]

Hence, there is an outstanding need to find a common approach to Qur’anic exegesis so that the Muslims could agree on the fundamental issues, challenges and themes of this era from the Qur’an, which after all remains the primary, common and constant source material for divine guidance. This brings us to the remarks appearing in an article ‘Pope Francis and Muslims ‘posted at New Age Islam on Sep. 11. It reads: “The Pope is not asking Muslims to understand everything written in the Qur’an in a literal way but rather asking them to make “an adequate INTERPRETATION” which supports common values such as the dignity of human life, the well-being of the world, peace, harmony, justice and global fraternity as well as global friendship. In a nutshell: an adequate interpretation of the Qur’an is actually a human and contextual interpretation which is in accordance with the actual context of the world where human rights, human dignity and other common values as mentioned before will be underlined and promoted."

While Muslims may be prompted to dismiss the Pope’s rationalization of Qur’anic message as his personal view, it is interesting to note that he in fact hits right at the head of the nail in his call to the Muslims to seeking an ‘adequate interpretation of common universal values’. Let us see what the Qur’an says to humanity on the very crucial theme of comprehending its message:

-        It calls for focusing on its clearly stated or definitive commandments – those that are of in universal nature and not specific to any particular context:

“He is the One who has revealed to you (O Muhammad,) the Book which contains (some) clear (Muhkamat) verses that (form) the essence of this Book, while others are allegorical (Mutashabihat). Those with perversity in their hearts follow that which is allegorical seeking confusion and seeking an interpretation. No one knows its interpretation, except God. Those, who have knowledge, say: ‘We believe in it; it all comes from our Lord;’ yet none is mindful of this, except the prudent” (3:7).

“Those to whom We have given the Scripture study it as it ought to be studied (with devotion and sincerity); it is they who believe in it…” (2:121).

“We have sent down the Book to you (O Muhammad,) with blessings so that the prudent may probe (Yaddabbaru) its verses (message) and be mindful of it” (38:29)

“Follow the best (meaning) of what has been sent down to you from your Lord, before suffering comes upon you of a sudden and without your knowledge” (39:55)

“None but the pure (Mutatahhirin) can touch it (the Qur’an) - given that the Qur’an is an oral revelation, the verse suggests that only those pure (of heart) can draw benefit from it.

“…We provide you with the Truth (the Qur’an) and the best interpretation (of its message).

And finally, the Qur’an declares:

“God sends down the best of discourses (Ahsan al Hadith) as a Book fully consistent in itself, and whose statements corroborate, expound and refer to one another (39:23).

The reader of the Qur’an is thus required to struggle to find the best meaning, relevant to the era, through close scrutiny of its text, and exploring the Secondary Sources, notably the authentic Hadith, only when it is necessary but with care.

It therefore follows that the Qur’an does not want humanity until eternity to dig into all the existential issues of the Prophet’s era – whether relating to armed encounters, or the Prophet’s spouses, conjugal matters, or the stories of past Prophets and tribes and so forth, which are however mentioned only in sketchy and cryptic manner, and liable to diverse interpretation depending upon how one fills the dots. Thus, in effect, the Qur’an expects the Muslims to make an “adequate interpretation” covering the common human values - its definitive or universal Ahkamat (3:7), which it spells out as a package of moral imperatives that includes, among other things, justice, liberty, equity, good and righteous deeds, curbing lowly temptations, good neighbourly and inter-faith relations, sharing of wealth with the poor, deliverance of women from conjugal oppression and dehumanization; good business ethics, fair payment for goods and services, financial support to the needy, use of intellect, striving for excellence – to cite some major examples. The Pope paraphrases this as “a human and contextual interpretation which is in accordance with the actual context of the world where human rights, human dignity will be underlined and promoted.” So, the Pope says practically what the Qur’an says though phrased differently.

The object of this article is not to dismiss the significance of exegetic corpus. Since the era of Ibn Jarir al-Tabari (d. 313AH/926AD) a succession of Mufassirin down the centuries and across the capitals of Islam devoted their entire lives to produce monumental works of Tafsir. The names of the most distinguished among them is listed below [2] in recognition of their contribution to exegetic sciences. But it must be remembered that today, some 12 centuries past Tabari’s era, it is enormously more tasking to access the message of the Qur’an by way of the cumulative knowledge of Tafsir than by accessing the Qur’an directly in accordance with its guideline as spelled out by the Qur’an itself and summarily mentioned by the learned Pope.

So let there be no doubts, suspicion or misgivings against Pope Francis’ call to the Muslims on how to interpret the Qur’an for what he says is consistent with what the Qur’an says while the way the Muslims including their Ulema and scholars attempt to understand the Qur’an is at times too circuitous and highly loaded with scholastic details and divergent narratives and embellishments. Maulana Abul Kalam Azad, one of the most renowned exegetes of the last century, captures the scholastic overloading of traditional tafsir in these words:

“The thinking of the very early Muslims was not conditioned by later period influences, so they could recognize the clear and simple truths of the Qur'an. The later (scholars) were not happy that the Qur'an should remain in its simple form. Their ‘intellectual ego' was not satisfied with this. They started clothing every statement of the Qur'an in a robe (that satisfied) their ‘intellectual ego'. As this robe did not suit the Qur'an, they force-fitted it, and as a result, the consistency was compromised and all became inconsistent and complicated.

...This (enrobing) reached a climax when philosophical and intellectual development (among Muslims) reached its peak. This was the time when Imam Fakhruddin Razi (d. 606 AH) wrote his Tafsir e Kabir and endeavoured, best as he could, to clothe the entire Qur'an in this artificial robe. If Imam Razi had realized this truth, then at least two-thirds, if not the whole of his Tafsir would have been useless.” [Tarjuman-ul-Qur’an, 1931; reprint New Delhi 1989, Vol.1. p.34/35.]

There is yet another problem with the traditional Tafsir that learned Maulana puts in these words (translated from Urdu).

“The poor taste of the times have also supported crookedness. We have therefore seen that in later periods, only those Tafsir have gained popularity for education and adoption, which totally lack the beauty of those (advocated by the) ancients... Look at the contemporary Tafsir. Wherever a set of opinions (by different scholars of the past) are quoted, often the weakest one is adopted, and the better ones ignored.” [Ibid.,43]

So, let the Muslims and their Ulema bite the bullet and follow the suggestion of Pope Francis to interpreting the Qur’anic message to get the best mileage out of this Noble Discourse – God’s greatest gift to humanity that the Ulema subjugate to their secondary sources. No wonder, some Hanafite jurists declared “Any Qur’anic verse, which contradicts the opinion of ‘our masters’ will be construed as having been abrogated, or the rule of preference will apply thereto. It is better that the verse in question be interpreted in such a way that it conforms to their opinion.” [Ahmad Hasan, Doctrine of Ijma in Islam, New Delhi 1992, p. 16.]

By clinging tenaciously to the secondary sources – the Hadith, the Sira, the Classical Sharia Law, the opinions and consensus of past scholars dating from the 4th century of Islam, the Islamic religious scholarship fails to offer a cohesive code for this era, spawns conflict on political, educational, economic, juristic and myriad other day to day issues of life, accentuates Sectarian and Takfirism, blocks integration of the Muslims with the mainstream societies, stalls advancement of universal knowledge, and among other things, reduces Islam to a cult of violence and sets its ideals backwards in history – to the ways and achievements of its scholars of the Medieval ages – thus indoctrinating the Muslim Umma to relive their past rather than go forward in the track of civilization. It is time they heeded the Pope’s call.

2 - Reminiscence on the great Mufassirin of Islam

The period began with a sharp decline in political influence of Islam, and the intellectual stagnation of its scholars. This led to a relative lull in Qur'anic interpretive work in the first three centuries of this period. However, the post-colonial modern era has seen a renewed interpretive zeal. Works of early scholars are being translated into English and various other languages, and voluminous interpretative works have been produced by illustrious scholars, the most notable works being: