By Jodi Rudoren and Isabel Kershner 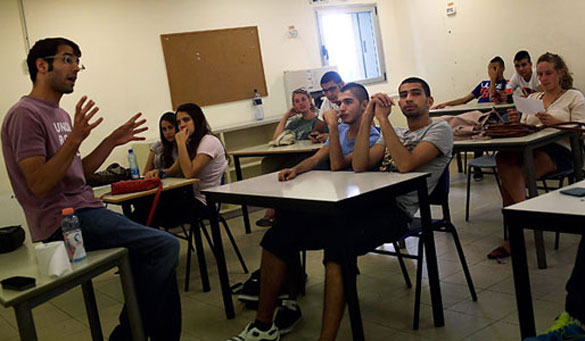 Ran Melamed, left, led a discussion on recent attacks by Israeli youths. His class is unusual for its mix of Jews and Arabs.

Tamer Jbarah, a 17-year-old Palestinian student who speaks accentless Hebrew after years in a bilingual school that is about half Jewish, said he was not at all surprised when a mob of Jewish teenagers beat an Arab teenager unconscious this month while hundreds watched and did nothing to help.

Tamer attends an unusual school, one that seeks to bridge the Arab-Jewish divide. But on the first day of classes Monday, when his teacher opened a discussion about the attack, the smoldering anger and distrust came through, even there. “From the age of 5, they say, ‘Death to Arabs,’ ” he said.

When the teacher countered, recalling a film in which Palestinian children chanted, “Death to Israel, death to Jews,” Tamer appeared defeated. “There is no hope when you see things like that,” he said.

The classroom conversation, as some two million Israeli children started school on Monday, was part of national hand-wringing over the Aug. 16 beating in Zion Square, which was described as an attempted lynching that left 17-year-old Jamal Julani near death. The education minister instructed all junior high and high schools to conduct a lesson on the episode, which revealed festering wounds regarding race, violence and extremism.

Israel has been struggling with myriad internal conflicts involving identity and pluralism. As the ultra-Orthodox population has grown, battles have erupted over the role of women in the public sphere and whether Yeshiva students should remain exempt from military service. A surge of illegal immigration by African workers led to a fierce backlash this spring, raising questions of tolerance. And a spate of mosque burnings and vandalism has hit Palestinian villages in the Israeli-occupied West Bank.

Monday’s effort to draw a lesson, perhaps a healing moment, came as the nation was shocked again when a court held two 12-year-olds and a 13-year-old in connection with the firebombing of a Palestinian taxi on the same day. The youths live in Bat Ayin, a religious Jewish settlement, and the taxi was hit on a nearby road. The driver and his five passengers were wounded, two seriously. The youths’ lawyer on Monday denied their involvement; the father of one called the case “a modern-day blood libel.” Eight teenagers, ages 13 to 19, have been arrested in the Zion Square attack, and several are expected to be formally charged on Tuesday with criminal conspiracy and grievous bodily harm by two or more people.

Parents of the teenagers, many wearing ultra-Orthodox garb and quietly reciting Psalms, waited anxiously outside a courtroom here Sunday during a succession of hearings. The mother of one suspect and several of the teenagers’ lawyers painted a portrait of an aimless group of youths, some of them troubled or having drifted from their religious upbringing with few social outlets, particularly during the long summer break.

“These are kids who do not have the patience to study,” said the mother, whose 18-year-old son has denied participation in the beating. She spoke on the condition of anonymity to protect his identity. “They have nothing to do, no money to spend and nowhere to go.”

Some knew each other well, others only by sight from hanging out in downtown Jerusalem’s Hahatulot Square, notorious for late-night, alcohol-fueled brawls. The Zion Square episode began in Hahatulot Square, where a crowd was singing racist, anti-Arab songs when, according to the police, a girl announced that she had recently been sexually assaulted by an Arab, sending the boys off on a rampage.

Only one suspect, identified as O. because of his age, has admitted beating Jamal; he is believed to have delivered the critical blow that caused the youth’s heart to stop. Shortly after his arrest, he said to reporters outside court, “For my part he can die; he’s an Arab.” O.’s defense lawyer, Itzhak Bam, described him as the only child of a quiet ultra-Orthodox couple, who he said found it hard to cope with their child’s behavioral problems and took him to a psychiatrist in the days before the assault.

A Jewish medical student administered CPR to Jamal, who was released from the hospital a week after the attack.

O., who is 14, spent the last school year at a boarding school and then a home for at-risk youth in a West Bank settlement, Mr. Bam said. Home for the summer, he removed his skullcap and gravitated to Hahatulot Square. His lawyer denied that racism was the primary motive. “I’m not sure that he could intelligently discuss the differences between right and left in Israeli politics,” Mr. Bam said.

Right and left alike have been shaken by the attack. Reuven Rivlin, the speaker of Israel’s Parliament, called it “a microcosm of a national problem that could endanger Israeli democracy,” and said the government itself is responsible.

“This evil comes from insufficient education,” Mr. Rivlin, a leader of the right-leaning Likud Party, said after visiting Jamal in the hospital last week. “Unfortunately, more and more youth think that hate and racial violence are permissible.”

In ordering schools to confront the episode, the education minister warned that some pupils might speak in support of the perpetrators. Educators were told to let the youngsters express themselves, but that “the unequivocal message must be a condemnation of racism and violence.”

Chaim Dajczman, principal of Thelma Yellin High School for the Arts in Tel Aviv, said he would bring the topic up in his weekly meetings with students in grades 10, 11 and 12. “We can’t pass an event so extreme and go on as usual,” Mr. Dajczman said.

The vast majority of these discussions will take place in something of a vacuum, since Israel has separate school systems for Arabs and Jews (and, indeed, distinct ones for secular, religious and ultra-Orthodox Jews). The rare exception is Tamer’s school, Hand in Hand, which runs three campuses enrolling a total of 950 students. After some brief words about the schedule Monday and a required volunteer program, the 12th-grade teacher turned quickly to Zion Square.

The discussion started out hopefully enough, with Yael Keinan, 17, announcing that her Jewish youth group would return to the scene of the crime the next afternoon to try to initiate conversations about racism and violence.

But that was quickly overcome by her classmates’ personal experiences.

Rasha Masalha recalled a Jewish 4-year-old telling her it was important to learn Hebrew and English — “Hebrew because it’s the language of the Bible and English because the Americans saved us from the Arabs.”

Kevin Kahkedjian said that when he and a Jewish friend traveled together through Ben-Gurion International Airport a couple of years ago, “I had to strip to my underwear and he just went through.”

Tamer told of hanging out with a group of Tel Aviv teenagers who were shocked to discover he was Arab because, he said, “I didn’t look like a terrorist or a rapist.”

Yael, one of 6 Jewish students among the 19 in the class, clammed up.

“You want to say a lot of stuff, but you can’t because people here don’t want to change their minds,” she said after class. “If people here are so depressed, how can you ever take that beyond? How can you ever dream more? It’s only the first day of school.”