Why I am Fasting During Ramadan 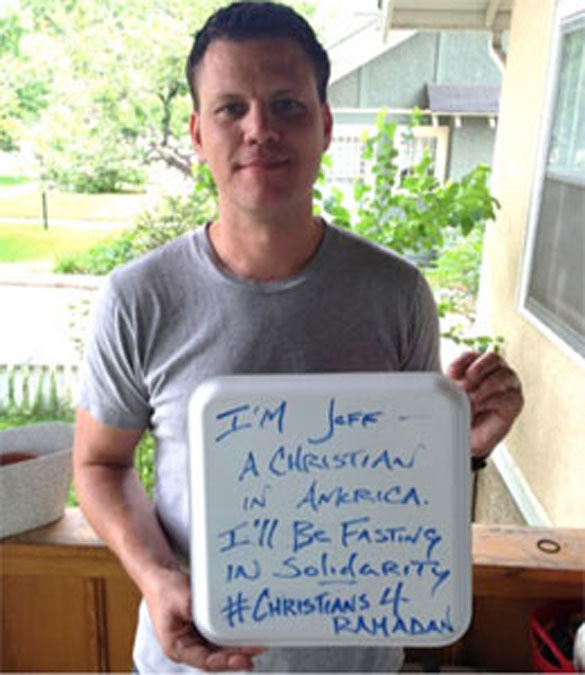 Over the last 50 years, Christians and Muslims have found countless reasons to kill one another. For every graphic image Americans see of ISIS, there is a parallel photo of a young Muslim boy killed in his homeland because of Western activities. Bloody tally marks have become so common we no longer see death. We see routine.

Last spring, I saw a set of photographs on Twitter of Islamic Americans who chose to fast during Lent as a sign of solidarity with their Christian neighbours (see #Muslims4Lent). I saw pictures of children who looked very different from my own holding up signs with their names and a commitment to give up their favourite toys or fast food for forty days. They were telling my kids, “We appreciate you and your culture and your faith and we want to elevate your time of devotion in our hearts.”

I saw pictures of young Muslim males with signs in hand, not highlighting our distinctions or past injuries, but outlining where they would sacrifice for Lent in order to journey with me during the season I held as most holy.

And I was moved.

Did these Muslims believe that Jesus was crucified to defeat sin and death? Probably not. Did these Muslims believe Christ should be declared “Son of God” or that his resurrection was the decisive event in world history? Again, no. But this did not keep them from saying, “We will stand beside Christians during Lent because we share this planet, because God gifts us the same sun and rain, because we need a new way forward.”

These pictures challenged me. In seeing men my own age with signs that not only said they wished me well but proclaimed my value and the value of my faith, all my natural distrust fell to the side. I realized in fresh ways that I’m tired of voices telling me that in order to love my country I need to be suspicious of Arabs. I’m tired of feeling the only response available to graphic videos is fiery retaliation. Most of all, I’m tired of being just a bystander and having nothing to offer for the cause of reconciliation and peace in a world that God loves so much.

But I hope this will change. My heart and trajectory need to change from one of simply criticizing war-profiteers and cable news channels to actually taking a decisive posture.

This year during Ramadan (June 16- July 17), I will fast and pray for those who embrace Islam: people I have not yet met, whose stories I have not heard, but whose lives matter to God and whose acts of devotion often display a character I would wish for myself and my sons.

I am not interested in fasting this month for ascetic reasons. I am not converting to Islam. I will embrace the self-sacrificial practices of others around the world because Jesus reminds me that it is those who hunger that will be filled, that the meek alone will inherit the earth, and that those who make peace will be called children of God.

Jeff Cook is a pastor of Atlas Church in Greeley, Colorado and he is the author of Seven: The Deadly Sins and the Beatitudes(Zondervan 2008).