Pope Francis Took Inspiration for the Encyclical Not Only From St. Francis of Assisi but Also From the Grand Imam of Al-Azhar, Ahmad Altayyeb

“I see the encyclical Fratelli Tutti as a testament of Pope Francis. He’s bringing together all the things he wanted to say over the last seven years. There’s an obvious connection with the Human Fraternity document that he signed with the Grand Imam of al-Azhar Al Sharif on February 4, 2019, in Abu Dhabi,” Cardinal Michael L. Fitzgerald, M.Afr, told America in this exclusive interview during his recent visit to Rome where he met the Pope.

Cardinal Fitzgerald discussed the encyclical and the Human Fraternity document with America at the Pontifical Institute of Arab and Islamic Studies in Rome, where he was once rector. After that assignment, he was called by John Paul II to work at the Pontifical Council for Interreligious Dialogue, first as secretary and then as prefect for four years until Benedict XVI, in an unexpected move, assigned him as nuncio to Egypt and delegate to the Arab League (2006-2012). Pope Francis made him cardinal in 2019 and told journalists he did so “as an act of justice.”

Cardinal Fitzgerald noted that Francis took inspiration for the encyclical not only from St. Francis of Assisi but also from the Grand Imam of al-Azhar, Ahmad AlTayyeb. Indeed, “Francis reveals he was ‘stimulated’ — that is the word he uses in Italian — by the Grand Imam”, the cardinal said. “And that expression caught my eye, because there is no precedent in Church history for a pope drawing inspiration from a Muslim in writing an encyclical.” He recalled Francis’s own words about his and the Imam’s meeting on the Human Fraternity document, which he mentions eight times in the encyclical: “This was no mere diplomatic gesture, but a reflection born of dialogue and common commitment.” The cardinal remarked “all that’s significant”, as is “the fact that a Muslim — Judge Ahmed Al-Salam — was one of the presenters of Fratelli Tutti at its launch in the Vatican.” 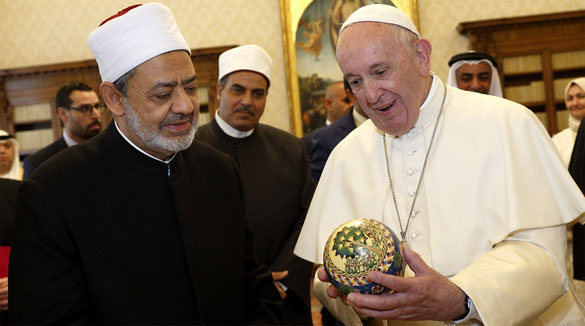 The cardinal, who studied in Tunisia and Egypt and worked in South Sudan, Cairo and Jerusalem, considered it “important” that both the encyclical and the Human Fraternity document emphasise that “we are all one family, and that this fact is based on our common origin from God, because God has created all people together.” He remarked: “This is something that Pope Francis and the Grand Imam of al-Azhar agree on. This is a theological principle, so they were doing theology together.”

He recalled that “the Qur’an does [say] that we all come from one single stock, and we are all in Adam and the whole of humanity, before actually being created, has accepted God as God, and Lord. But they have to be reminded about this, and that’s the whole thrust in Islam. We are all Muslims when we are born because we have all accepted God as our Lord” but, he remarked, “That doesn’t come in the encyclical, of course.”

He noted that “while Muslims refer to God as the Creator God, the Merciful God, they do not refer to God as Father. They would object to that, because the word ‘father’ for them has a sort of sexual con notation, and so that would not be worthy of God.” But, he remarked, the fact that Pope Francis and the Grand Imam “were able to produce this document on human fraternity without referring to God as father shows that this is fine.”

He drew attention to the similarities between the Human Fraternity document and Fratelli Tutti, and noted that while the Pope speaks of a “desensitised” human conscience in the encyclical, Francis and Al-Tayyeb use the even stronger term “anaesthetised” in the Abu Dhabi text.

The African missionary cardinal emphasised that, in the Human Fraternity document, Pope Francis and the Grand Imam issued “the condemnation of terrorism in all its forms and expressions.” He said it’s “significant” that Francis quoted those same words in Fratelli Tutti (paragraph n.283), that make clear that “we should not support terrorism in any way, neither financially nor by attempts to justify it in the media.”

He drew attention to the fact that “in the Christian world, Pope Francis is not the head of all Christians. He is the head of the Catholic Church, but he has very good relations, personal relations, with the leaders of the other Christian communities and so, by reason of his own personality, he has a wide audience.” But the imam’s situation is different: “The Grand Imam of al-Azhar doesn’t have authority over all Muslims, and even among Sunni Muslims (author’s note: over 85 per cent of all Muslims are Sunni) there are some who are critical of al-Azhar, so I think the fact that the Pope and he are talking together will give a boost to the voice of the Grand Imam.” He considered it a positive sign that Dr Mohammad Ali-Shomali, a leading Shiite scholar from Iran who lives in England, has written positively on the Human Fraternity document in a recent issue of the journal of PISAI.

A Friendship That Changed Things

This good relationship between Pope Francis and the Grand Imam of al-Azhar, and indeed Francis’s positive relationship with the Muslim world in general, began by emphasising that “the foundation for all this is the Second Vatican Council. The ground breaking document for this is Nostra Aetate, the Declaration on the Relation of the Church to Non-Christian Religions. Pope Paul VI promulgated this on October 28, 1965.  “All the popes since then have been applying that in their own different ways,” said Cardinal Fitzgerald.

The cardinal said, “I felt that John Paul II was far ahead of the Church in reaching out to people of other religions, including Muslims, and was not afraid because he was so Catholic. This thing of being open to people of other religions wouldn’t bring any doubts about his own faith. He’s following his faith in order to be open.” But, he said, “His successor, Benedict XVI’s position, was a bit of a withdrawal because he seemed to look at the world from a European point of view more than  a universal [one].”

On the other hand, he said, “Pope Francis, by his acts and his speaking as well, is much more open and, in a sense, is more practical because he works through gestures, and he works through friendship. We saw this with his Muslim leader friend from Argentina, Omar Abboud, and the fact that he invited him to accompany him to the Holy Land and they went to the Western Wall together. All this is very significant. Francis is building on his own work that he had done before he became pope, and he’s developed this. As Pope, he hasn’t been afraid to develop the friendship with Ahmad Al-Tayyeb, and that changes things. It’s not just a formal relationship and trying to do things together.”

Tracing the history of their relationship, the cardinal recalled that the Grand Imam visited the Pope in the Vatican and invited him to an international meeting on peace in Cairo. Francis accepted and went there in April 2017. Al-Tayyeb returned to Rome for a meeting organised by the Sant Egidio community in 2018 and asked to meet the Pope again. He was received by Francis together with a delegation of five people after the general audience on a Wednesday morning in a small room next to the Paul VI audience hall.

The cardinal said, “they talked for some time in a rather formal way, and then Francis asked, ‘do you have a programme? Are you having lunch somewhere?’ They said they hadn’t arranged anything, so he said, ‘Can I invite you to lunch?’ and then the conversation flowed much more easily. And it was during that lunch that they suggested writing this common document on Human Fraternity.” The cardinal recalled that some months after they had signed the text in Abu Dhabi, they set up the Higher Committee for Human Fraternity in the summer of 2019 to promote that document. He hailed the establishment of this committee as “in every respect an advance. It shows we do things together, and we try to do more things together.” ––America Magazine

Original Headline: Pope Francis and the Grand Imam of al-Azhar on ‘Fratelli Tutti’