I Became A Prisoner of Fanaticism: Asia Bibi on Pakistan Prison, Life in Exile 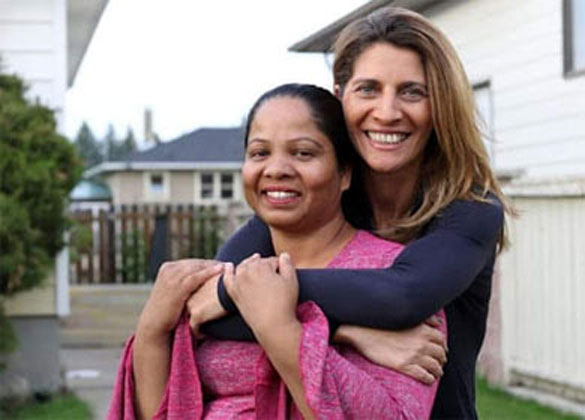 Such a relief to see beautiful smile on #AsiaBibi's face, after years of depressing, torture and isolation. She is finally free & united with her family.

Recounting the hellish conditions of eight years spent on death row on blasphemy charges but also the pain of exile, Pakistani Christian Asia Bibi has broken her silence to give her first personal insight into an ordeal that caused international outrage.

Bibi was sentenced to death on blasphemy charges by a Pakistani court in 2010 but then dramatically acquitted in 2018. She now lives in Canada at an undisclosed location.

French journalist Anne-Isabelle Tollet, who has co-written a book about her, was once based in the country where she led a support campaign for her.

She is the only reporter to have met Bibi during her stay in Canada.

In the book "Enfin libre!" ("Finally Free") -- published in French on Wednesday with an English version due out in September -- Bibi recounts her arrest, the conditions of prison, the relief of her release but also the difficulty of adjusting to a new life.

"You already know my story through the media," she said in the book.

"But you are far from understanding my daily life in prison or my new life," she said.

"I became a prisoner of fanaticism," she said.

In prison, "tears were the only companions in the cell".

She described the horrendous conditions in squalid jails in Pakistan where she was kept chained and jeered at by other detainees.

"My wrists are burning me, it is hard to breathe. My neck... is encased in an iron collar that the guard can tighten with a huge nut," she wrote.

"A long chain drags along on the filthy ground. This connects my neck to the handcuffed hand who pulls me like a dog on a lead.

"Deep within me, a dull fear takes me towards the depths of darkness. A lacerating fear that will never leave me."

Many other prisoners showed her no pity. "I am startled by the cry of a woman. 'To death!' The other women join in. 'Hanged!' Hanged!'."

Blasphemy is an incendiary charge in Muslim-majority Pakistan, where even the whiff of an unsubstantiated allegation of insulting Islam can spark death at the hands of mobs.

Her acquittal on the charges, which stemmed from an incident in 2009 when she argued with a Muslim co-labourer, resulted in violent protests that paralysed the country led by firebrand cleric, Khadim Hussain Rizvi.

Bibi, who vehemently denied the charges against her, argued in the book that the Christian minority in overwhelmingly Muslim Pakistan still faces persecution.

"Even with my freedom, the climate (for Christians) does not seemed to have changed and Christians can expect all kinds of reprisals," she said.

"They live with this sword of Damocles over their head."

And while Canada gives her a safer and more certain future, Bibi also has to come to terms with likely never setting foot in her homeland again.

"In this unknown country, I am ready for a new departure, perhaps for a new life. But at what price?

"My heart broke when I had to leave without saying goodbye to my father or other members of the family."

"Pakistan is my country. I love my country but I am in exile forever," she said.