Nowadays, there is a lot of talk about Muslim immigrants not being welcomed in India. But, when one reads folklore of South India, one finds many places where Muslims saints and warriors are accommodated within local Hindu temple lore. Here are four examples. 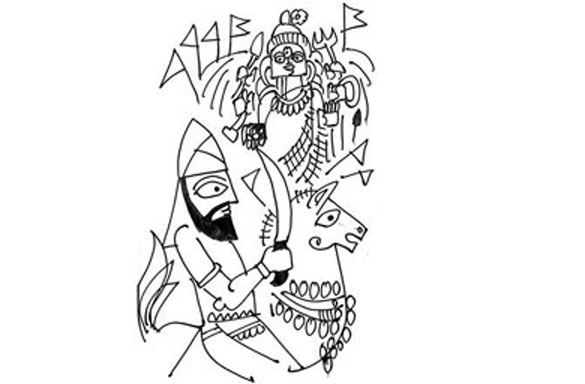 In Kerala, we have heard of the temple of Sabarimala, of the god Ayyappa, the son of Shiva and Vishnu, who is raised by a local king and who transforms into a great warrior; one who can domesticate tigers and who kills the demoness, Mahishi. We are told that he had a companion called Vavar. Vavar, or Babar, is described as a Sufi saint who came from Arabia to Kerala, or a pirate, who travelled to Kerala and disturbed the sea merchants who traded between Kerala and Arabia. He was subdued or overpowered by Ayyappa. After which Vavar became Ayyappa's friend. A Dargah in his memory is built, which is visited by pilgrims who visit Sabarimala each year. There is a sword of Vavar-swami, indicating military roots. He is considered to be the companion, friend, devotee, as well as messenger of Lord Ayyappa.

At the Annapurneshwar temple, in Cherukunnu, in the Kannur district of Kerala, we hear of a goddess who came from Kashi in a ship, with a Muslim captain. He now rests in the nearby Oliyankara Dargah. In her temple, the goddess has a little window to see him there. This links the goddess with sea trade, through which Islam came to India, in Kerala.

In northern Tamil Nadu, there are temples of Draupadi, where people worship Draupadi as a form of the mother goddess. One of her guardians is called Muttal Ravuttan. These words are associated with Muslim traders, from North India as well as Arabia. They were involved in the trade of horses with the local Pandyan kings. As per local legends, performed in folk theatres, such as Terukkuttu, we are told that Muttal Ravuttan was a Muslim as well a mantravadi, or a sorcerer, who, with his magic, could only be subdued by someone not born of the womb. Draupadi was born of fire and therefore, was able to subdue him and he became the doorkeeper in her shrine. In some stories, he accompanied Draupadi, as she went to marry Yudhishthira. He stayed in Yudhishthira's kingdom, because he was in love with a local woman in Indraprastha, and served her forever. He sits at the northern gate of the Draupadi temple. This suggests his northern origin.

The fourth story comes from the temple of Srirangam, which was invaded in the thirteenth century by Malik Kafur, who took the images from the temple to the North. We are told that Ramanuja himself went north and through a series of adventures managed to bring the statues back. However, the Sultan's daughter had fallen in love with one of the statues and came all the way to Srirangam looking for the statue and died at the gates of the temple. Therefore, a shrine has been built in her honour. She is considered to be Ranganathaswamy's Muslim wife, Thulukha Nachiyar. So, a meal of roti with butter is offered to him, which is seen as a Muslim meal.

Devdutt Pattanaik writes and lectures on the relevance of mythology in modern times.