Independence Day: O God, Put Out This Fire for Us

“Yesterday I went to Gujranwala and found the house where you were born. The house where you left behind your parents, drenched in their own blood,” wrote Mohammad Riaz in an e-mail he sent to his friend Mahinder Singh in Burke, Virginia. 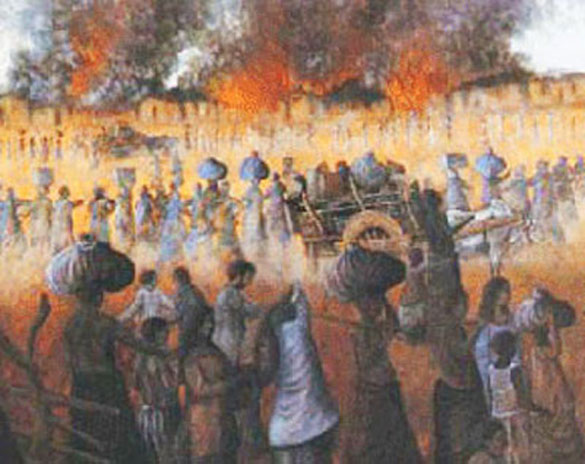 “Now a family of Muslims from Jullunder lives in your house and their story is not much different from your story. So together we lit a candle for your martyrs in the house where you left behind your parents soaked in their blood,” he wrote.

Listen, when you go to India now, do visit the village where my sisters jumped into a well to save themselves from a marauding crowd.

“There, in the darkness of that well, you light a candle too for my martyrs.”

Mahinder wrote back, promising to do what his friend had done and said: “Once I illuminate the dark depths of that well, we will get together in Virginia and pray, for your martyrs and mine.”

So when Riaz returned to Burke, he went to a temple with Mahinder and later took him to a mosque in Springfield, Virginia. In both places, they said the same prayers.

“O God of all humans, forgive us. Forgive us because we have shed so much blood in your name that it has darkened the face of the earth. Our sins have defamed you.

“The seeds we sowed have turned our land into a volcano. The venom and hate it spits out is burning down everything,” they prayed.

“Come and grow so many flowers in our garden that their aroma overcomes the stench of blood which still permeates our land.”

I heard about these two men, their e-mails and their prayers some months ago but I was saving this story for the Independence Day week, hoping to share this message of hope with those hundreds of millions of people who will celebrate their independence on Aug. 14 and 15.

But I almost gave up the idea when I read about 60 Hindu families from Balochistan and Sindh migrating to India because they no longer felt safe in Pakistan.

While looking for something else to write about, I discovered a little note of a conversation I had with a 10-year old Pakistani visitor last year.

I asked him how he felt meeting so many people non-Muslims. “Some of them were very nice,” he said, paused, and added: “Not all the Muslims in my city were nice.”

And I thought if a visit to Washington could convince a child that people of other faiths could be nice too, Mahinder and Riaz’s story could also have a positive impact on someone somewhere.

So here is a story that can only happen outside the Subcontinent because back home Indians and Pakistanis do not meet each other. They spend their entire lives believing in whatever they are told about each other.

Mahinder also believed that there were hardly any good people in Pakistan. Although he was a child, he never forgot how his brother and he had left their dead parents in the Haveli in Gujranwala.

But most of his memories about the partition and the riots that followed were based on what he learned from his relatives and family friends, who also had suffered similar losses in the riots.

Although he had heard that Muslims too were killed in the riots, he had never met one who had lost parents, like he did. Not until he met Riaz.

It was a graduation ceremony for the daughter of an American friend where he met Riaz. Mahinder did not smoke. So when some people started smoking, he came out on the deck, holding a cup of tea. He noticed another man, sharing the deck with him.

The man was standing at an angle that the light from a nearby lamp exposed his hands. Mahinder noticed that his right hand had no fingers. It seemed as if they had been carved out by a surgeon. He wanted to but did not ask how the man lost his fingers.

But later in the evening, he saw the man talking to Brajesh, one of Mahinder’s close friends. So when the man left, he asked Brajesh why the man had no fingers in his right hand.

“Oh, they were chopped off,” said Brajesh. “Chopped off? How, when?” asked Mahinder. “He is a Pakistan Punjabi and he lost his fingers during the riots, in 1947,” said Brajesh.

“Sad,” he said to himself. “But still not comparable to losing your parents.”

The next morning he told his wife he had met a man who lost his fingers in the riots. The wife showed no interest and he too forgot about Riaz until he met him again, this time on the metro.

Like many commuters, Mahinder did not like driving to Washington during rush hours. So he parks his car at a metro station close to his home and rides the metro.

The man saw him and smiled. Mahinder smiled back, so the man came to him and said: “Riaz, Mohammed Riaz.” “Mahinder Singh,” said Mahinder.

They were speaking Punjabi, so Riaz said to him, “I can guess from your accent that you are from West Punjab.” Now Mahinder also noticed that the man had an East Punjabi accent and told him so.

They both laughed but the conversation did not go further.

A week after this brief encounter, Brajesh invited Mahinder to his restaurant for a business lunch. Mahinder was a car dealer and Brajesh wanted to buy a delivery van for his restaurant.

His restaurant was in an area with a large Muslim population. So Brajesh, being a good businessman, served only Halal meat. Mahinder often made fun of Brajesh, a Hindu from Delhi, for being more particular than Muslims about Halal and Haram.

While eating, Brajesh said: “I am still very South Asian, never do business with strangers. You are my car dealer and Riaz is my property dealer.”

“Now that you have mentioned him, what else you know about this man, about his lost his fingers?” asked Mahinder.

“Not much,” said Brajesh. “Like you, he also lost his father, a brother and two sisters in the riots but I do not know the details.”

This was quite a shock for Mahinder. He had always believed that the Muslims did not suffer as much as the Hindus and Sikhs during the riots.

Whenever he came across a book or a newspaper article that contradicted his beliefs, he simply ignored them. There was no room for doubts in his world. “Muslims were aggressors, period,” he often said to his family.

But it was difficult to ignore Riaz. Here was a man who had not only lost his family in the riots but also a carried reminder of that tragedy with him, a hand without fingers.

So he asked Brajesh to invite Riaz and him to tea at his restaurant.

Brajesh did. But Riaz and Brajesh did most of the talking. Mahinder was mostly quiet. When they were leaving, he said to Riaz, pointing at his hand: “I am sorry about your fingers.”

“Oh, I do not always notice their absence,” he said. “This happened when I was a child.” Mahinder did not ask how and Riaz did not explain.

But when he met Riaz again in the metro, Mahinder asked him to have dinner at his home.

On the agreed day, Riaz came early, as Mahinder had suggested. He took him straight to his deck and asked his family not to disturb them.

While making tea for Riaz, he said: “Look, we are both Punjabis and Punjabis are straightforward people. So let me tell you why I invited you. I want you to share with me all that happened to you in 1947.”

“I guessed that much,” said Riaz, smiling. “Had you asked me before I came to America, it would have upset me. Not anymore,” he said.

Then he asked, “When did you come to America?” “Five years ago. My in-laws sponsored us,” said Mahinder.

“OK, so you have not yet met enough Pakistanis to overcome the pains of the past,” said Riaz. “I have been here 20 years and have met enough nice Indians to forget the past.”

He then explained how an Indian physician saved his daughter’s life when he was new in America and could not afford health insurance. “He charged no fees, gave us free medicine and even paid  a specialist to see her.”

Riaz then told Mahinder everything about his village in Gurdaspur, about how a mob attacked his home and killed his father and brother, how his mother hid him under the quilts before the mob came, how his sisters jumped into a well to protect themselves from the mob.

He told Mahinder how his entire household was helping him hide and how everybody was dead when he came out. Everybody except his mother who was left injured because the mob presumed she was dead.

Although he was a child, he knew he should not cry as it would draw attention but at night he heard someone crying ran out and saw his mother crying with pain.

His father, who was a school teacher, also served as a part time physician. So he had some medicines and bandages at home that her mother used to cover her wounds.

He told him how the two of them walked out of the village after midnight and later joined a group of Muslim refugees going to Pakistan.

How a mob attacked the group, killed many, and how one of them chopped off his fingers with a machete. The story ended when Riaz and his mother made it safely to Pakistan.

Mahinder got up and hugged Riaz for what seemed like eternity.

Wiping their tears, they went to the dining room where they hardly said anything to each other.

When Riaz was leaving, Mahinder hugged him again.

The author is a correspondent for Dawn, based in Washington, DC