Quran Desecration: Legacy of Harmony; Why Punjab’s Malerkotla Did Not Boil? 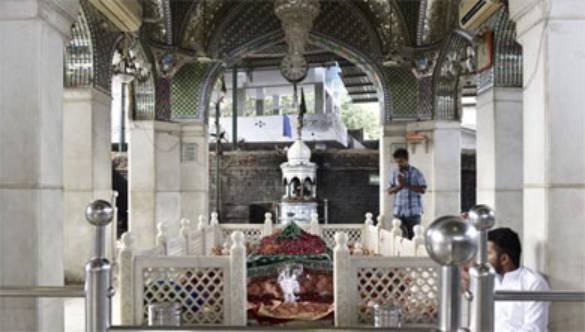 The Haider Sheikh ki Dargah in Malerkotla. The old Punjab town is known for its harmony among the Hindu-Muslim-Sikh community in Malerkotla. (Saumya Khandelwal/HT Photo)

The muezzin’s call to prayer blends seamlessly with the Aarti at a nearby temple late afternoon at the bustling Jarg Chowk in Malerkotla.

Women in Burqas and saris bustle about, chatting in Punjabi and breaking into giggles now and again. A young girl in a Hijab helps her friend pick a Rakhi.

It is another ordinary day, as different faiths attest, in Malerkotla — Punjab’s lone Muslim-majority city. Locals here treat arson and stone-pelting, fallout of an alleged desecration of the Quran on June 28, as an aberration. A blot brought about, they say, by outsiders.

They point to their history. The former princely state, ruled by Nawabs of Afghan and Pathan descent, carries no ghosts from Partition of 1947. It didn’t suffer any communal clash or violence when the new India-Pakistan border smouldered during Partition.

The June flare-up was an outsider job, insists Mohammad Jamil ur Rehman, a member of the district peace committee. “One was from Jind in Haryana, others from Pathankot. The mob comprised people who shifted to Malerkotla from either Bihar or UP, and are unaware of our history and legacy,” he says.

Humanity, not religion, is the cornerstone of Malerkotla’s peace, he says. “We told them (rioters) these dirty political games should not divide us. The people understood and went home.”

Locals swear by the bond they have forged over the years based on the mystical strains of Sufism.

Much of it was on display when the June violence left eight people, including policemen, wounded. Calm was restored in a day.

Police records back Malerkotla’s unique communal harmony; there has not been a single case of rioting or communal tension registered in five years.

The economy of Malerkotla — spread over 122 square km and with a population of 107,000 — rests on artisans making embroidered badges, flags, banners, ceremonial dresses and uniforms for the Indian armed forces, the US Army, the UN, Congolese, Turkish, Canadian, Rwandan and Kuwaiti police.

Muslims own most of the shops and workshops, while the artisans are mostly Hindu. The two religious groups have been working together for generations.

“I was 10 when my father died. For me, home has been this workshop and Abba who taught me my work. I have never thought of them as people from another community,” says 38-year-old Vijay Lal, busy crafting a Rwandan police badge.

His mentor is Mohammad Rana, or Abba. Vijay’s father, Mohan Lal, too worked for the Ranas. “We celebrate all festivals together and I also visit the mosque with them,” Vijay says.

Hindus, Sikhs and Muslims own joint businesses; the economy is based on this relationship, Rana says. “If we start fighting and burning down each other’s shops, it is us who will suffer... We do not know if it is something to do with the blessings of Sufi saints on Malerkotla or is it just us, but the thought of getting violent on communal lines never struck us.”

Like Rana, Dharam Chand runs a shop of handcrafted badges. Established in 1947, the shop has an all-Muslim workforce.

“I owe my life to a Muslim who saved me during Partition. I have over 10 Muslim artisans working for me for the past 25 years. Why would I ever have any ill feelings for them? The temple or god is not feeding me and my family, it is this business and I cannot imagine it without my Muslim brothers,” he says.

Malerkotla never sleeps and its shops have no shutters. At 2am the discourse here revolves around Sufi philosophy and prose, much like a group outside a stall exchanging Shayri over tea. The city’s Qawwals have kept alive the voices of Khusro and Auliya and believe the Sufi Kalam (poems) has kept Malerkotla unscathed. “We convey to people the basic lessons of humanity through the words of Bulleh Shah, Amir Khusro, and Khwaja Sahab. This is what has kept Malerkotla together,” says Mohammad Javed Irshad, son of Irshad Rehmat Qawal and a tenth-generation Qawwal.

Javed says he performs Qawwali at programmes jointly arranged by Hindus, Sikhs and Muslims. “Religion that divides is nothing but a disgrace,” he says.

The harmony dates back to the city’s Nawab rulers, the last being Iftequar Ali Khan. His palace, the Mubarak Mahal, is in ruins and his begum, Manwer ul Nisha, in her nineties, lives there.

“Nawab sahib trusted his Hindu staffers with major responsibilities. His main adviser was a Hindu. Since he safeguarded both Hindus and Muslims during Partition, everyone respected and listened to him,” she says.

Recent terrorist attacks in Dhaka and Europe have disturbed young Hindus, though. “We have lived peacefully, but we feel insecure now. We fear for our children. The fact remains we are a minority here,” says Ajay, a Hindu resident. “There are no incidents of violence, but why should I live in constant fear? I plan to leave the city.”

“These young children watch the news and feel they are sitting on a time bomb. Migrant workers from Bihar and UP pollute their mind.”

He cited Muslim weddings to illustrate the city’s harmony. “They (Muslims) appoint two caterers: one for those who eat meat, and another for us Hindus. They print invitation cards in Urdu and Gurumukhi. Some of them have even done Kanyadan at Hindu weddings,” he says.