Passages from the Bible Discovered Behind Qur'an Manuscript, though Qur’anic palimpsests are 'extremely rare', according to Christie’s 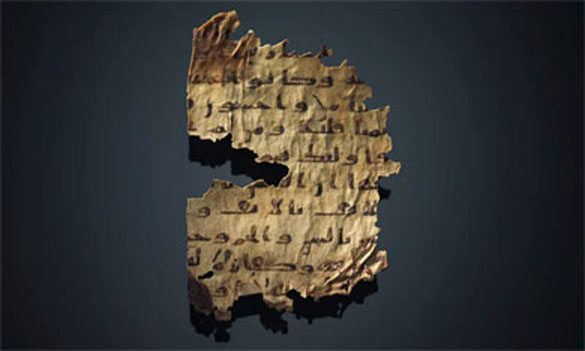 ‘It’s quite extraordinary’ … the only recorded palimpsest of a Qur’an copied on to a Christian text. Photograph: Christie's

An “extraordinary” discovery by an eagle-eyed scholar has identified the shadowy outlines of passages from the Bible behind an eighth-century manuscript of the Qur’an – the only recorded palimpsest in which a Christian text has been effaced to make way for the Islamic holy text.

French scholar Dr Eléonore Cellard was looking for images of a palimpsest page sold a decade earlier by Christie’s when she came across the auction house’s latest catalogue, which included fragments from a manuscript of the Qur’an which Christie’s had dated to the eighth century AD, or the second century of Islam. Scrutinising the image, she noticed that, appearing faintly behind the Arabic script, were Coptic letters. She contacted Christie’s, and they managed to identify the Coptic text as coming from the Old Testament’s Book of Deuteronomy – part of the Torah and the Christian Old Testament.

“This is a very important discovery for the history of the Qur’an and early Islam. We have here a witness of cultural interactions between different religious communities,” said Cellard, who is attached to the College de France.

“It’s quite extraordinary,” said Christie’s specialist Romain Pingannaud. “Once you know it’s there, you can only see it, it becomes so obvious. We missed it at the beginning. It’s fascinating, particularly because it’s the only example where you have an Arabic text on top of a non-Arabic text. And what’s even more fascinating is it is on top of passages from the Old Testament … It shows the contact between communities in the first centuries of Islam; it’s very relevant.”

Christie’s, which is offering the fragments for auction with a guide price of £80,000-£120,000 on Thursday, believes that the manuscript is likely to have been produced in Egypt, which was home to the Coptic community, at the time of the Arab conquest. It said that the fragments “resonate with the historical reality of religious communities in the Near East and as such are an invaluable survival from the earliest centuries of Islam”.

While the writing style of the Qur’an scribe dates it to around the eighth century or early ninth century, it is not possible to identify how much older the ghostly Coptic writing is, although the formation of the letters means it is unlikely to have been written earlier than the seventh century, according to Pingannaud. “Carbon 14 testing would date only the material, not the writing, but it’s quite destructive and these folios are too thin,” he said.

“We think this is because the Qur’an is such an important text and although vellum was very expensive, the Qur’an was always written on new material. It’s highly revered and so they would use brand new material,” said Pingannaud.

It was, however, “quite common in the Byzantine and Greek worlds to have palimpsests”, he added. “Parchment is very strong, it doesn’t suffer too much – it’s sensitive to humidity but very solid,” he said. “At the time it was erased the parchment was probably like new and it’s only with centuries passing that the ink which sank into the parchment provides this ghost image we see.”