You have just dined, and however scrupulously the slaughterhouse is concealed in the graceful distance of miles, there is complicity.

And today, this is what we say:

You have just performed your Hajj and not far from your place, and hidden from your views, lies a killing field where millions of sheep have been slaughtered -- one of them bore your name, although you two never met.  The last word the sheep heard as he saw the butcher’s knife was the name of the lord, and that should come as some consolation to you. 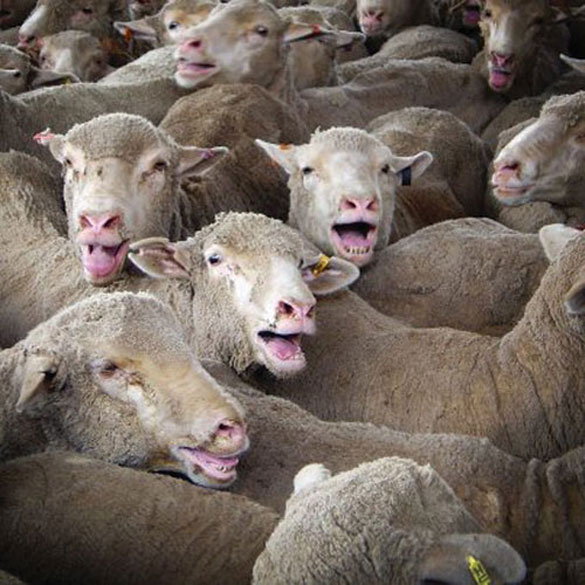 When Abraham pulled his knife on his son Ismail, to whom Abraham was deeply attached, Abraham bore the pain and anguish of the oncoming demise of his son.

You did not feel that pain when your sheep was slaughtered -- why should you?  It was a sheep you never met, slaughtered by a butcher you never knew, at a killing field you never visited and most importantly the critical moment when your sheep took his last breath remained out of your consciousness. Your sheep had no name other than an ID tag stapled on his ear.

In your case, the sheep did not mean anything to you. Your sheep raised by some voodoo practicing aborigine in some remote corner of a distant island makes treacherous thousands of mile's journey to an Islamic peninsula. The sheep comes with no name until the last moment of his life, when he became your sheep in God’s log-book.

Although this whole drama is played as a re-enactment of Abraham sacrificing his son Ismail, but any   association of the name Ismail with a sheep raised by some savage heathens would unquestionably be seen as blasphemy.  However, in unspoken words, it is precisely this ritual that is played out in remembrance of Abraham’s story, and it does not take a special pair of eyes to note that which actor is forced to play Ismail’s role.

Hence this act of ours, whether we admit it or not, does translate into a cheap skit of the Abraham event that we so piously carry out, although with an undercurrent of public display of  our self-importance depending upon the beauty, physique, and most importantly the purchase price of the sheep.  Thus we slay to be seen of men.

But the story of your sheep is not unique

This time of the year also, like any other year, Muslims from all over the world converge to Mecca to perform the Hajj, which involves, among many other rituals, a mass scale slaughter of several millions of  gentle animals, supposedly to please their God. For this, the pilgrim and then expects to be rewarded in the next world.

The slaughter of this enormity is unparalleled to any mass scale killing of animals, be it the harpooning of Japan whales in Japan, or the seal hunting of seals in Canada.  It is unparalleled not only because a large number of animals are killed in a very short time, but because this whole feat is carried out in an area not more than a few tens of square miles, where the terrified animals can hear the cries, and smell the blood of their fellow creatures amidst the hustle and bustle of the activities and strange noises in an area unfamiliar to them.  It is hard to imagine what goes through their minds when they find themselves in this concentration camp from which they cannot escape.

When looking at the lives of these animals, one could hardly make a comparison with the case of mass- killing of whales and seals mentioned earlier where they live out their entire lives in their natural environment, -- free from human intervention and harassment.

These sheep often come from Australia, and it is by far the longest distance these have to travel. Every month, tens of thousands of sheep are crammed onto huge shipping vessels and suffer for days on end as they make their way across the ocean. Unable to move in often sweltering conditions, many die of disease or starvation. Sick and injured animals typically don't receive veterinary care. Even those who manage to survive the gruelling trip don't often make it off the ship alive since ventilation systems shut down when the ship reaches the unloading dock.

Recently, because of an outbreak, 70,000 sheep destined for the Middle-East had to be unloaded at the port-city of Karachi, Pakistan, where a large number of them had to be killed and buried hastily even though some were still conscious and not properly killed, -- as understandably high-speed throat-slitting of tens of thousands of animals --- one at a time is not conducive to care for either religious or humane rules.

Islamic law is clear: for meat to be Halal (Kosher), animals must not be under stress or experience any discomfort prior to their slaughter. They cannot be mutilated, deformed, or diseased when killed. Any meat that is obtained as a result of any deviation from these edicts cannot be qualified as Halal.

Sheep who are shipped thousands of miles in excruciating conditions, who suffer from starvation and thirst and who routinely die of disease can never be considered Halal.  The tenets of Islam require animals to be alive and healthy at the time of slaughter. Sheep used in the live-export trade, who endure long transport in immeasurably cruel conditions, are far from healthy.

Studies have found that about half of all sheep deaths during sea transport to the Middle East are caused by starvation. These animals are accustomed to eating grass and do not recognize the pulverised pellets that they are provided with on the ship. Even though they are famished, they simply stop eating. The extremely crammed conditions means that even those whose desperation prompts them to try the pellets may not be able to get to the feeding troughs or eat enough to keep them alive.

After the dazed and starving survivors are unloaded, their ordeal is not over. They are transferred to feedlots, where investigations have documented that sick and weak sheep are not provided with care. Finally, they are moved to market, where they are pushed, pulled and roughly yanked around by workers.

As if the transport of these animals isn't egregious enough, there's more. Many of the sheep who are shipped are cast-offs from Australia's wool industry. These sheep have already been subjected to painful castration and have had their tails cut off without pain relief. Sheep used to produce wool also endure a cruel mutilation known as "mulesing". They are pinned on their backs while large chunks of skin are cut from their hindquarters – often without pain relief. This practice is used as a way to prevent what's called "fly strike", where flies lay their eggs in the wrinkly folds of their skin and maggots develop. But many other humane options for fly strike prevention are readily available.

And this is the saga of the animals who will be carrying on their back their Hajee executioner across,   the Rainbow Bridge leading to Heaven, where they all will live happily ever after.

This article is third in the series of articles on Animal Sacrifice that the author has written exclusively for the Website NewAgeIslam.com

The previous two articles can be accessed through the following links:

Animal Sacrifice vs. Compassionate Eid: An Open Letter To Our Muslim Brothers and Sisters (11/07/11)

Syed Rizvi is a physicist by profession and is the Founder and President of Engineers and Scientists for Animal Rights. Syed lives in Silicon Valley, California.