In the past I had written two articles on this subject.

This year I am sharing with you a very important news item that took place the other day and is accompanied by a compelling video, and I hope you will support our effort to minimize this suffering by whatever means it takes

I cannot see how a just and compassionate God could reward His people for doing such things to animals in His name. Things that cannot be described in words

Here are the two previous articles from NAI, I am referring to

Yesterday, as temperatures soared above 40 degrees in Kuwait, this heat-stressed Australian sheep was found languishing on the back of a truck, at the notorious Al Rai Market. He should never have been there.

The Al Rai Market has been the site of some of the worst cruelty witnessed to Australian sheep in the live export trade. Conditions in this market are so bad, that no live exporter is allowed to send animals there.

Yet, in the last 24 hours, Animals Australia investigators have uncovered hundreds of Australian sheep being illegally sold at Al Rai — making headlines in Australia. And tomorrow, they will be brutally killed during the Festival of Sacrifice.

Only five minutes from this market, is the base for Meat and Livestock Australia's Middle East consultants — who are supposed to monitor and report breaches of live export rules. But once again it has been up to Animals Australia investigators taking considerable risks to bring these breaches to the attention of the government. 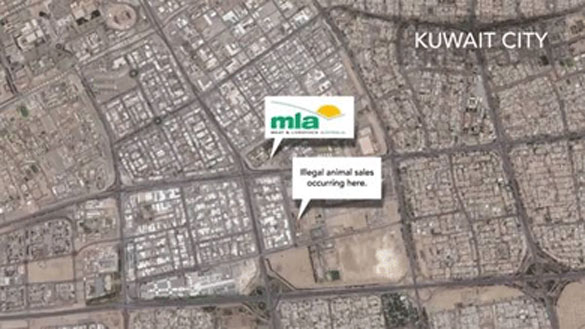 And we wouldn't be there if not for your support.

Right now — thanks to the generous contributions of thousands of individuals — Animals Australia has investigators on the ground throughout the Middle East and Asia to hold live exporters to account.

In Jordan, our Chief Investigator, Lyn White, has already documented over a thousand Australian sheep being illegally sold — with their ear tags removed to prevent the exporter responsible being identified.

We've warned the Australian government about these serious breaches of regulations and what will happen to these animals.

Tomorrow, as the Festival of Sacrifice commences, our investigators will be there to confront, document and expose the heart-breaking reality of live export. The evidence they gather will not only be used to prevent more Australian animals suffering a similar fate, it will be shared with international animal protection organisations to aid their efforts to end live export too.

The cruelty associated with this annual festival has nothing to do with race or religion. Countless Muslims worldwide stand united with Australians in their condemnation of animal cruelty. In fact, some of our investigators are locals and Muslims — who also yearn for a kinder world for animals. These circumstances are the product of an industry that has broken the rules, and continues to put profits ahead of the wellbeing of the animals in its care.