'The Real Fighting In Islam Is Offensive; Defensive Fighting Is Carried Out Even By Animals; Cutting Throats Is the Sunnah (Practice) Of the Prophet' - Taliban Scholar Tells Pakistan Army Official – 5 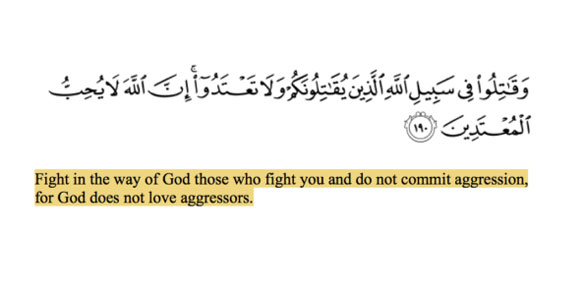 Transcription of a video of an ideological debate between a Taliban Scholar and Pakistani Army Official based on the translation from Urdu in the superimposed text in Pakistan government video.

{Being presented so that Ulema (Islamic scholars) may know how Islam is being distorted in extremist discourse and defend Islam's peaceful nature by refuting the allegations against Quran (words of God), Hadees (sayings of the Prophet), Sunnah (examples, practices) of the Prophet and Shariah (Islamic Law).}

Pakistani Army Official: Ok, tell me something else. Allah SWT instructs the Muslim in Qur’an not to initiate the fighting. War is always in Islam. This is a clear principle and you as well as I am aware of that. You are mentioning Lal Masjid again and again but there were so many weapons stored in the Masjid and Madrasa. Now tell me what was the purpose of those bombs and Kalashnikovs recovered from inside the house of Allah SWT?

Taliban Scholar: If you are willing to understand then Insha’Allah I would explain to you in a nice manner. You said that fighting in Islam can only be defensive, is actually quite a foolish argument. The real fighting in Islam is offensive. Defensive fighting is carried out even by the animals. Even the cats would fight for the defence of their kittens. The real fighting is the offensive Jihad. Allah SWT instructed Prophet (pbuh) at various places in Qur’an e.g (And fight in the path of Allah 2:190), (so when the sacred months have passed away, then slay the idolaters wherever you find them, and take them captives and besiege them 9:5) (and fight the polytheists all together as they fight you all together 9:36)- Your concept is wrong that only the defensive fighting is permitted in Islam.

The real fighting is Islam is offensive and initiating the fighting is allowed and encouraged in Islam.

There are many verses, Hadees and the books of Fatwa, full of references in this regard.

Both of your arguments are based upon wrong understanding and we know that very well.

Pakistani Army Official: Ok, give me the answer of another question. Wherever Pakistan Army entered into your areas, have you ever heard that we ever knocked any Masjid down? But I can swear and I have seen it with mu own eyes that you people plant grenades and explosive even inside Qur’an. Is this your respect for Qur’an!

Taliban Scholar: Hmmm, alright, Masha Allah .... you are trying to be clever. So you are saying that Pakistan Army has not demolished any Masjid then what about all these Masjid? Have they just collapsed spontaneously?

Pakistani Army Official: Tell me then, which Masjid has Army demolished?

Taliban Scholar: Phew! Are we now required to present the lists of Masjid?.....Masjid of sam, Sararogha, Barwand. I can count so many Masjid in this list ; Lal Majid. That issue also stared after Army demolished many Masjid (in capital Islamabad).

Pakistani Army Official: (Sounds angry) Whatever it is, I have not heard the names of the places that you mentioned. I have never seen any soldier destroying any Masjid and I have never seen any soldier cut the head, hands or ears of your dead (bodies). But I have seen your people committing these brutalities that they cut the heads, ears or noses of the dead soldiers. Tell me if Prophet (pbuh) ever cut the nose, ears and throat of a Kafir even.

Taliban Scholar: First you said that you have not seen Masjid demolished by your soldiers. Why don’t you then come down to see them?

Pakistani Army Official: But you cut the throats and noses.....we have not demolished any Masjid, thanks to Allah SWT. Wherever Pakistan Army goes; it improves and beautifies the Masjid? Tell me about cutting; do you accept that your Taliban cut the throats, noses and ears of the dead soldiers of Pakistan Army? Prophet (pbuh) has strictly forbidden these acts and this was done by Hind and Wahshis (savages) in the battle of Uhud who cut the organs of prophet’s uncle Hamza RA. This is not the work of a Muslim and only the Kuffar and polytheists would cut the ears and noses, You do this. Don’t you?

Taliban Scholar: Main Sahib (Respected sir, sarcastically), why are you so angry?

Pakistani Army Official: No, I am not angry, May Allah SWT save you from my anger, just answer my question. Why do you cut the ears, noses and throats of dead soldiers?

Cutting the noses and ears is forbidden according to Shariah and we repent in front of Allah SWT if any of the Taliban carried out such acts. I wish if you could also repent on all the Masjids that you have destroyed. You are going around trying to prove yourself to be a Muslim but you are not accepting any of your mistakes. I have accepted many times mistakes that we might have committed; some wrongs according to Shariah but we are trying to rectify ourselves.  You, on the other hand, have blatantly refused to accept that you ever destroyed any Masjid. Allah o Akbar! The proofs of destruction of Masjids by Pakistan Army have been in videos. Masjid of Barwand, Sararogha, those destroyed in the vicinity of Lal Masjid and many others, all are seen in those videos. Why do you not accept that?

Taliban Scholar: No, we do not trust your oath because you are still lying. If you are saying that you have not visited those areas where the Masjids have been destroyed by the army, then you do not need to fear. You may come to those areas bit I am staying humbly that destruction of Masjid has been recorded in videos. Our media outlets like Ummat studio, Jundullah studio, Umar media have issued such videos in which it is clearly shown that the Masjid in these areas have been destroyed by personnel of your Pakistan army. Now you accept it or not; we are the seeker of truth and we are accepting our mistakes. I invite you as well to observe those mistakes of your soldiers and reflect on them. I don’t know which world you are talking about where you are improving Masjids. Maybe you are mentioning your achievement of one Masjid in Esha gate.

Taliban Scholar: Other than that we have never seen Pakistan army constructing any Masjid. You must have constructed Masjids in your cantonments but they are your temples and they do not really count. But this is very strange that you have never seen any Masjid destroyed by Pakistan army. You cannot avoid a sandstorm just by burying your head in the sand like ostrich. Also keep this in your mind Insha’Allah you cannot have peace in this country until we decide to be peaceful.