Between the Lines of Religious Rhetoric

In his book A Malaysian Journey (1993), Rehman Rashid said something to the effect that Malaysians had become masters at reading between the lines. In 1993, we were only just getting to know Astro, Malaysia’s own satellite TV network. The kind of access to the internet that we take for granted today was then still a dream that Dr Mahathir was trying to help visualise and create. 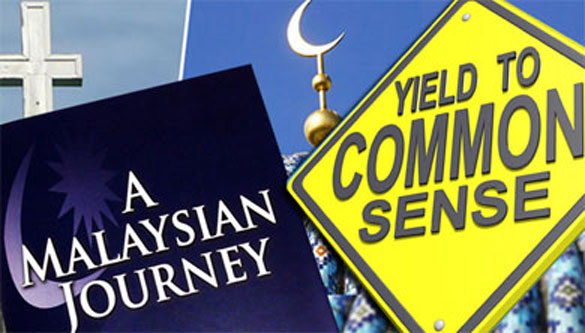 The printed press was strictly controlled, so writers like Rehman had to tackle sensitive stories like bomb experts navigating a minefield. Often they would allude to a sensitive political or religious viewpoint without obviously taking it by the horns. Thus, the seasoned readers had no choice but to fill in the blanks all by themselves. This is what he meant by “reading between the lines”.

Twenty-two years on, things have changed almost beyond recognition. The society that was once cocooned by censorship has woken up to the harsh realities of a democratised cyber space that allows anyone to spread his unvarnished views freely. Now we are free to spout until the MCMC or the cops knock on our door. This cyber reality is looking more and more like the proverbial Pandora’s Box that cannot be shut once opened. Mainstream news media has also shifted over time to produce more sensation simply by reporting on cyber news, which is as good as the same.

When cyber forums have exhausted their natural limit on ideas and in words, the next progressive step is to turn theory into action. Politics has come to reflect this same careless attitude in dealing with perceived threats and insults, even when there is none. The subtle reading between the lines is no more, where writers used to practice self-censorship to protect themselves and readers with fragile sensitivities. People have become accustomed to acting out every little hurt and insult to their dignity by taking their reactions too far. The behaviour of our society now reflects ideas and political thought wrapped up in neat marketing parcels for maximum reach and impact. This is salesmanship without conscience. We sell and have been sold the idea that “majoritarian” rule entitles us to have our way. And when we don’t get our way, we become wilfully aggressive or even destructive. We become arrogant and inconsiderate of others, focusing only on demanding what we selfishly believe is due to us.

Over the weekend, 50-odd residents of Taman Medan protested against a cross erected outside a shop house church in their area. IGP Khalid Abu Bakar said that the issue was about location and not religion or faith, thereby averting or pre-empting the necessity for sedition charges against the protesters. Once again, IGP Khalid was putting forth his own view as the view that suffices, when clearly it is beyond the scope of the police department to decide on such matters. Perhaps he concluded that his personal discretion should be an important factor in enforcing the peace. However, if something is seditious according to the law, we have judges and the courts to decide about it.

The religious dimension at its core is obvious. However much we may point to absent permits and municipal laws, these were not the concerns of the 50 protesters. They were reacting, maybe irrationally, to the possibility that their faith and that of Muslim youths’ might somehow be challenged or compromised by the inanimate cross symbol. It surely has to be about faith, even if it might seem far-fetched or illogical to many of us. Otherwise, following on another absurd logic they should also be against the addition and multiplication symbols in mathematics.

This case follows on the heels of another recent incident in Penang, of a malicious and intolerant Facebook posting complaining about the volume of the azan. It was later confirmed by police to be from a cloned FB account using the personal details of the framed victim, including his photo and address. Who would be so stupid to do that? In the ensuing uproar over the viral post, the man’s house got pelted by outraged people who took it upon themselves to repay the deed with rocks and stones.

It would be understandable to question the motive and the nature of the perpetrators of the outrage. Non-Muslims already know too well not to complain about the azan volume, especially since Teresa Kok was famously hauled up under the ISA for the false claim that she had asked a mosque to lower the volume of its azan.

Coming at a time when the nation is facing other major difficulties and by-elections, there is the suspicion that the mischievous FB stunt was calculated to provoke and divert our collective consciousness away from issues that are currently consuming our attention. Would one be reading too much between the lines to notice the Taman Medan “cross” episode follows along a similar vein? Some might suggest the group protest was in fact spontaneous. But these incidents of religious intolerance have a strong “baffle effect” on all other news in the media. These stories get highlighted as top news, shoving all other news aside.

These kinds of visceral reactions are exactly the kind of response Malaysians needs less of. It is no coincidence that religious issues get the most play politically precisely because they evoke this paranoid response without the need for too much thought. Our unsophisticated Malaysian electorate may not have a clue about macro-economic issues or long term educational strategies. But they can usually be relied upon to feel strongly about the racial and religious divide, and it is these sentiments that the unscrupulous are hoping to leverage on.

Most Malaysians should now have enough common sense to see through these ruses, and reject this show of our basest nature. We must learn to not respond when these forces of mischief encourage us to rise against our neighbours and fellow citizens who mean us no harm, who only wish to live in peace and graceful harmony as we all do.