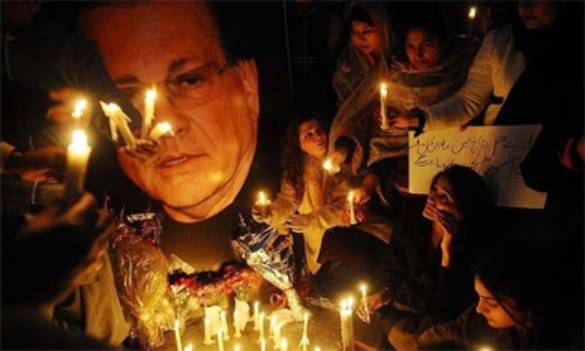 Governor Salmaan Taseer died at the hands of a religious fanatic on January 4 last year. Fearlessly championing a deeply unpopular cause, this brave man had sought to revisit the country’s blasphemy law which, as he saw it, was yet another means of intimidating Pakistan’s embattled religious minorities. This law — which is unique in having death as the minimum penalty — would have sent to the gallows an illiterate Christian peasant woman, Aasia Bibi, who stood accused by her Muslim neighbours after a noisy dispute. Taseer’s publicly-voiced concern for human life earned him 26 high-velocity bullets from one of his security guards, Malik Mumtaz Quadri. The other guards watched silently.

In this long, sad, year more has followed. Justice Pervez Ali Shah, the brave judge who ultimately sentenced Taseer’s murderer in spite of receiving death threats, has fled the country. Aasia Bibi is rotting away in jail, reportedly in solitary confinement and in acute psychological distress. Shahbaz Taseer, the governor’s son, was abducted in late August — presumably by Qadri’s sympathisers. He remains untraceable. Shahbaz Bhatti, another vocal voice against the blasphemy law, was assassinated weeks later on March 2.

Political assassinations occur everywhere. But the Pakistani public reaction to Taseer’s assassination horrified the world. As the news hit the national media, spontaneous celebrations erupted in places; a murderous unrepentant mutineer had been instantly transformed into a national hero. Glib-tongued television anchors sought to convince viewers that Taseer had brought ill unto himself. Religious political parties did not conceal their satisfaction, and the imam of Lahore’s Badshahi Masjid declined the government’s request to lead the funeral prayers. Rehman Malik, the interior minister, sought to curry favour with religious forces by declaring that, if need be, he would “kill a blasphemer with my own hands”.

In psychological terms, the reaction of a substantial part of Pakistan’s lawyers’ community was still more disturbing. Once again, they made history. Earlier it had been for their Black Coat Revolution, apparently welcome evidence that Pakistani civil society was well and thriving. But this time it was for something far less positive. Television screens around the world showed the nauseating spectacle of hundreds of lawyers feting a murderer, showering rose petals upon him, and pledging to defend him pro-bono.

Another phalanx of lawyers, headed by Khawaja Sharif, former Chief Justice of the Lahore High Court, rose up to constitute Qadri’s defence team. In his court testimony, a smugly-defiant assassin declared that he had executed Allah’s will. Justice Sharif agreed, saying that Quadri had “merely done his duty as a security guard”. He said it was actually Taseer who had broken the law of the land by attempting to defend a person convicted of blasphemy and, in doing so, had “hurt the feelings of crores of Muslims”.

Taseer’s was a high-profile episode, but there are countless other equally tragic ones which receive little public attention. Surely it is time to reflect on what makes so many Pakistanis disposed towards celebrating murder, lawlessness, and intolerance. To understand the kind of psychological conditioning that has turned us into nasty brutes, cruel both to ourselves and to others, I suggest that the reader sample some of the Friday Khutbas (sermons) delivered across the country’s estimated 250,000 mosques.

It is surely impossible to hear all Khutbas, but a few hundred ones have been recorded on tape by researchers, transcribed into Urdu, translated into English, and categorised by subject at www.mashalbooks.org. Since there was no conscious bias in selecting the mosques, they can be reasonably assumed to be representative examples.

Often using abusive language, the mullahs excoriate their enemies: America, India, Israel, Christians, Jews, Hindus, Shias, and Qadianis. Before appreciative crowds, they breathe fire against the enemies of Islam and modernity. Music is condemned to be evil, together with life insurance and bank interest. In frenzied speeches they put women at the centre of all ills, demand that they be confined to the home, covered in Purdah, and forbidden to use lipstick or go to beauty parlours.

But the harshest words are reserved for the countless “deviant” Muslims. Governor Taseer was considered one. The former minister for foreign affairs, Shah Mahmood Qureshi, is another. In a foul-mouthed speech that the reader can hear on the above website, Qureshi is denounced as “Haramzada” by Maulana Altaf ur Rehman Shah of Muhammadi Masjid in Gujarat and described as a “keeper [mujawar] of graves”. Quoting Nawa-e-Waqt, this Maulana of the Ahl-e-Hadith school calls Qureshi a lapdog who stands with his “cheek on the cheek of Hillary Clinton”. What, he asks, could be a matter of greater shame? Parliamentarian Jamshed Dasti, also accused of grave worship, is harshly condemned for being unable to name the first five verses of the Holy Quran.

One presumes that most listeners have enough intelligence to ignore such violent fulminations. But at times their effects are deadly. One such sermon, according to Qadri’s recorded testimony, was the turning point for him. He had heard a fiery cleric, Qari Haneef, at a religious gathering in his neighbourhood, Colonel Yousuf Colony, on December 31, 2010. It is then, says Quadri, that he made up his mind to kill his boss. Quadri had participated in the gathering in his official uniform, reciting the Naat in praise of the Holy Prophet (pbuh). His official gun had been slung around his shoulder at the meeting. Four days later, he fulfilled his goal.

To be sure, not all Khutbas are ugly and violent. But even if 10 percent are — and the data suggests this is an underestimate — that still makes for roughly 25,000 dangerous ones every week. A civilised society cannot sustain this for too long. Surely, the Pakistani state will sooner or later have to come up with a mechanism for regulating what can be said at religious gatherings. A possible model might be that of Egypt, where Khutbas are pre-recorded and approved by the Ulema of Jamia Al-Azhar. Without some agreed form of control, Pakistan shall sink ever deeper into religious anarchy and fanaticism.