The Covid-19 pandemic is an extraordinary event, unprecedented in scale and reach, and with previously unimaginable political measures taken, especially in Europe, which is now the epicentre of the pandemic. 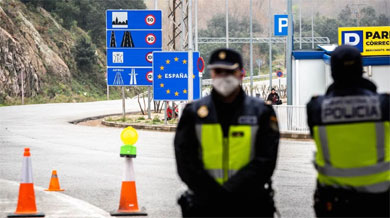 Spanish police at the border with France in La Jonquera, Spain, on March 17, 2020. Will people in the Middle East accept similar restrictions? Photo: AFP/Adria Salido Zarco/NurPhoto via Getty Images

So far-reaching have some of these political measures been that they have overturned some fundamental assumptions about Western societies.

As the coronavirus continues to spread to other countries, those societies, including those in the Middle East, may also find political assumptions rapidly overturned.

The first assumption is that major decisions by Western governments must be preceded by some public discussion. All Western countries are democracies, but the extraordinary and far-reaching political decisions made over the past few weeks have been taken with barely any public discussion.

Italy’s countrywide lockdown happened overnight. France shut almost the entire public space – restaurants, bars, cinemas – with four hours’ notice. In Denmark, parents were given a day to prepare for all schools closing. This week, the whole of the European Union shut its external borders with less than 12 hours’ notice.

It is impossible to think of any modern political decisions of such consequence that have been made with such little discussion – and indeed with so little dissent.

It is often thought that citizens of the West are, to various degrees, mistrustful of government power and particularly of intrusion and overreach. Yet the pandemic has shown that, in fact, at a moment of crisis, citizens accept wide-ranging government action – and indeed demand even more intrusive government action.

Both Italy and France, two countries with a long history of workers’ strikes and civil disobedience, have mostly responded to draconian measures peacefully. Even in the UK, a country so mistrustful of the state that, almost alone in Europe, it has no national identity cards, the public is calling for more radical, far-reaching government action.

The second assumption is that the networks on which life depends are robust. For most ordinary people, the realization that this is not the case has been perhaps the biggest shock of the crisis. The idea that supermarkets could run out of essential items – food and medicines – has been a recurring theme of social-media discussions.

Many appeared to believe that there were, somewhere, government warehouses full of essential goods, ready to be used in just such a crisis. No such warehouses exist.

Elsewhere, airlines have been grounded and many of them risk collapse. The financial markets are in turmoil. The same networks that allowed cheap products, cheap food and cheap holidays have been found wanting in a crisis.

The third assumption was that the worst aspects of human nature could be constrained by liberal societies. The crisis has certainly brought out the best in many countries. But racism has returned and small, daily acts of anger are common. Even the United States seeking exclusive use of a coronavirus vaccine being developed by a German company points to an ugly underbelly, now exposed.

Will any of that happen in the Middle East?

With the exception of Iran, the Middle East has so far avoided the huge number of infections seen in East Asia and Europe. But that may yet change. So much about this outbreak has been unexpected and has altered almost overnight.

Already some of what is happening in Europe has reached the Middle East. Panic buying is a feature of several countries now and, as some viral examples of racism toward Asians demonstrate, the region is not immune to that strain of intolerance.

Governments in the region have tried to take a two-pronged approach: prepare for the effects of mass infections, and use fiscal stimulus to mitigate the effects of widespread isolation on the economy. Some have been able to push through decisive actions more rapidly than others.

Egypt has pledged more than US$6 billion to help its economy; Saudi Arabia has pledged $13 billion, aimed mainly at small and medium-sized businesses. And the United Arab Emirates is preparing a war-chest of $27 billion, almost as much as the EU bloc itself. There has thus been swift action even before a crisis has settled in.

If more drastic action is required, would the public be as quiet as in Europe? With many Middle East governments ranging from authoritarian to interventionist, the assumption must be that the public would more readily accept it if forceful measures were needed.

As the coronavirus spreads, it is overturning political assumptions. It may yet do so in the Middle East. For now, the best of those to be overturned would be that a region in the midst of so much mass upheaval is not prepared for a mass outbreak.

Original Headline: Can the Middle East adapt as the West has had to?