PM Modi's Saudi Sojourn: Even More Significant Than Being Made Out

Prime Minister Narendra Modi's advisers have taken to heart the flak from many of his detractors regarding the high visibility of his foreign visits and the media hype connected to them. There is no reason why such a significant visit at a most appropriate time should be covered in the inner pages of print media and not even receive a pre-event build up by visual media.

The 'romantic' angle takes a much lower rung when it comes to a country such as Saudi Arabia. Even the UAE as a Gulf country received a reasonable share of romanticism during the PM's visit, due to its comparative openness. With the Saudis it is more about geo-politics, trade, energy, radicalism, terror and counter terror. This near about covers almost everything the PM is discussing with Saudi leaders and there are no high-profile social events involving the diaspora which can get the adrenaline flowing.

It's all about business and interests and that for media appear to have limited dwell time. The diaspora is huge at 3 million but comparatively low end as far as social strata is concerned. These are grim realities no one can deny. Yet, the sheer size of financial remittances is something no one can ignore either.

The Modi visit is being criticised for its timing (a little too late is the perception) and for not taking Iran into its ambit, especially after Iran's emergence from its isolation and the recent visits by President Rouhani to Islamabad and that of President Xi Jinping to Tehran. That is a separate issue but balancing relations between these two important countries is indeed important. 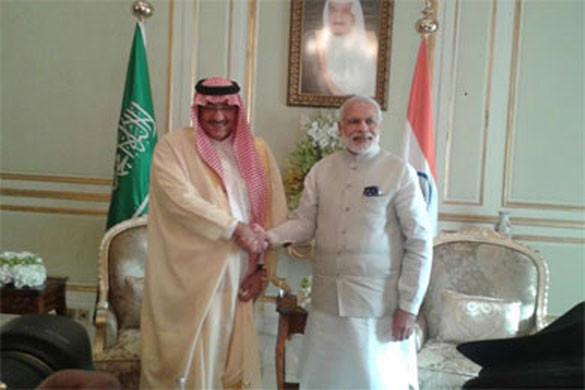 However, if anything, PM Modi needs to give Saudi Arabia its place under the sun at a time when friends are fast deserting it. The word seems to be out in circles of the international strategic community that Saudi power is on the decline, low oil prices is leaving it cash strapped and its involvement with promotion of radical Wahhabi culture is inviting severe criticism. Recent targeting of a Shia cleric, and the aimless and some say pointless war in Yemen also have won it no friends. In fact Western nations are all evaluating their own approach to Iran after the Joint Comprehensive Plan of Action (JCPOA) or Iran nuclear deal. While relations with Iran are important it is not a zero sum game with regard to their relations with Saudi Arabia.

That is the approach India too needs to evolve. No denying that the Modi government is attempting to do exactly that but unfortunately the message is not adequately carrying due to expert views in media still rooting for an 'either or' relationship with these two countries. Possibly the lower publicity of the visit is also with a view not to send any negative signals to Iran.

What is at stake is well known. Briefly, assurance of continued energy supply is one of the important issues. Although Saudi Arabia is also happy with India's ravenous energy hunger and low energy prices will drive supply, it is the crisis situations that are as important. The Gulf is vulnerable to crises of unpredictable nature which can place obstacles in the way of continued supplies. For such contingencies India and Saudi Arabia need to remain in consultation.

As the second largest trading partner in the Middle East its economic significance cannot be underplayed. However, even more important is the trillion dollar plus intent it has of investing in internal infrastructure; India of course would want a piece of the cake although the recent flyover collapse in Kolkata will surely dent its confidence and that of potential clients. No doubt there will be many MOUs signed but this has become routine in foreign visits. The proof of success will be in terms of how many are followed up after the high profile visibility of exchange of portfolios.

Diaspora issues are important in their own way. It is learnt that the market for Indian labour is generally reducing in Middle East with Philippines being the gainer. Diaspora remittances have been and still are an essential element of the Indian economy. Also important is to keep the diaspora motivated and display how much the home government is concerned about Indian people. It conveys adequate messages to the host government about the extent to which it can take the Indian workers for granted.

While business, trade and energy are no doubt important, PM Modi's visit will be judged more from what is achieved in the strategic domain. Terrorism and counter terrorism, radicalisation and deradicalisation, dealing with Daesh and most importantly building a relationship without reference to the P word.

There is a broad perception in India and in the rest of the world's strategic community that the Zia Plan to target India through irregular warfare and the bankrolling of Pakistan's nuclear weapons programme were both closely supported by Saudi Arabia. Despite this the Indo-Saudi relationship remained on even keel.

Saudi Arabia has inevitably supported Pakistan on issues concerning J&K and its overall political backing to Pakistan has enabled that country to remain emboldened. A special military relationship between Pakistan and Saudi Arabia ensures that Pakistan provides for the security of the royal family in Riyadh. Some doubts may have occurred when Pakistan declined to send troops to Yemen in support of the Saudis. However, retrieval has been effected by Pakistan's wholehearted participation in the recent Exercise Northern Thunder conducted by Saudi Arabia as a message of its power projection against Syria and the Shia alliance.

PM Modi's timing has been good. When a nation struggles and finds it difficult to accept notions of its declining strategic significance, political diplomacy and personal rapport between leaders assists very largely in establishing or maintaining strong relationships. India's relationship with Saudi Arabia has always been good despite irksome Pakistani attempts to dilute it. The Saudi King was the Chief Guest at the Republic Day Parade a few years ago. Continuing to give the Saudis importance at a time when there is potential of dilution of Saudi Arabia as a politico-strategic entity will only enhance the future of any relationships. Saudi Arabia is so geo-strategically located that a dilution of status can only be a temporary hiccup which may continue a few years.

I do feel that the Prime Minister would have sensitised the young Crown Prince on the intricacies of terror threats including nuclear terror. He may also have informed him of the threats of nuclear terror emanating from Pakistan in the event of a meltdown. Now that Israel and the Saudis have emerged as friends due to the common Iranian threat this could also be an opportunity for India to display sagacity and work towards an Israel Iran detente which may then draw Saudi Arabia into it too. Hopefully some mention may have been made of this and responses tucked away for the not too distant future.

This has been Mr Modi's second visit to the Middle East. He will return in the near future to visit Israel which is quite used to being treated differently from the official stance of many countries. By then, not having a more comprehensive plan to visit Iran too would send irksome signals. Can the visits to the two countries follow or precede in the same run? That will be an interesting decision to take and would depend a lot on the comprehensive understanding of the dynamics of the Middle East.