The Enemy within – A Thrilling and Satisfying Polemic 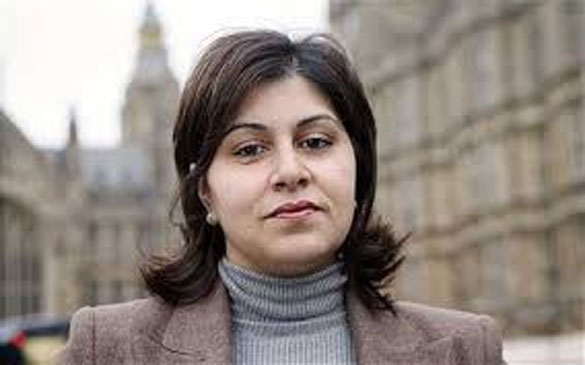 The Prevent strategy steps in to stop freedom of speech’ … Sayeeda Warsi. Photograph: The Guardian

Sayeeda Warsi’s father arrived in northern England from Pakistan with less than £3 in his pocket and built a £2m-a-year bed-manufacturing business. His daughter qualified as a lawyer and became the first Muslim woman to be a member of the cabinet. Despite all this, she has been subjected to the insult of being perceived as “the enemy within”, and finds herself wondering whether the UK will still be a home for her grandchildren. It is this personal stake that gives her forthright and intelligent book its sense of urgency. By tackling the “Muslim problem” head on, Lady Warsi has added to her accomplishments the feat of speaking truth to power.

She argues that the 7/7 bombing became the basis of bad policy, extending pre-charge detention; terrorism in the name of Islam was treated differently from others forms of terrorism. By replacing multiculturalism with British values as the yardstick by which Muslims were measured, the path was set for the present state of disengagement between government and community. “In an attempt to build a more cohesive and resilient society,” she laments, “we demanded that ‘the Muslims’ join what we believed we stood for rather than jointly charting a route to what we wanted to be”.

Warsi builds a powerful case against the government’s anti-terrorism policy. She starts by listening to why, in their own words, the perpetrators of 7/7 did what they did – as revenge and punishment for British military action overseas. The bombers, she argues, evolved from the Afghan mujahideen of the 1980s whom the west supported in the fight against the Soviet Union. This Frankenstein’s monster argument is not new, but Warsi layers her evidence piece by piece. She cites figures to prove that after 9/11, only 0.5% of all terrorist deaths have occurred in western countries; the majority take place in Muslim countries. Muslim terrorists are mostly killing Muslims. And, more shockingly, most deaths from terrorism in the west are at the hands of killers with far-right, nationalist or supremacist ideologies.

Warsi zooms in on the failure of the government to acknowledge what makes a violent jihadi. Drivers such as inequality, poverty and gang culture have been overlooked, she says, and instead the focus has been on the vaguely defined concept of Islamist extremist ideology. This runs contrary to the government’s own research, which found that a “large number of those involved in terrorism do not practise their faith regularly”. Her greatest criticism is directed at the costly Prevent strategy, which “steps in to stop freedom of speech when no law has been broken”. Prevent has stigmatised young Muslims and stifled debate. Never implemented in Northern Ireland, it makes Muslims feel paranoid and singled out.

In 2011, Warsi gave the first speech by a national politician on anti-Muslim sentiment and hatred. Islamophobia, she said, “has passed the dinner table test” to be socially acceptable . Here, she tackles the rationale for this hatred, unpicking and rejecting the swirl of claims on which it flourishes. She argues that Islam is not more violent than other religions; it does not hold exclusive rights to terrorism. Yet this is the crux: Muslims are now being judged by a higher standard than other British people, with more and more Muslim organisations and activists deemed “beyond the pale”.

It is this policy of non-engagement pursued successively by Labour, the coalition and Conservative governments that Warsi wants to reverse. In her own words, she asks that we “press the restart button”. She appeals to Muslims to focus on our children’s future and to face up to the mistakes made in the past and still being made – caste discrimination and sectarianism, importing territorial battles from overseas and the Muslim Council of Britain’s historic decision not to attend Holocaust Memorial Day.

At this stage in the book, the voice of Warsi the lawyer mounting a case gives way to the politician delivering a speech. Out with polygamy, the burqa, misogyny and segregation, she says; in with unified Eid days, more female representation and local zakat investment (the religious obligation of alms giving by the wealthy). All these aims are reasonable but Muslims, when it comes to their religious practice, will not listen to politicians. They need to hear this same advice from their imams and scholars. Warsi acknowledges that imams in Britain are overwhelmed and underpaid. To ensure that they know English, that they are qualified theologically and socially “to reason and rationalise the practice of the faith within the broadest parameters allowed by religious texts” should be the highest priority. Yet she is more interested in who speaks for British Muslims than who they are listening to. This leads her to circle the same unfit organisations for whom international causes are more important than the forging of a vibrant British Islam at ease with its setting. Nor is her assertion that Muslims are too diverse to be represented by a single voice convincing. There is a valid case for Britain to have a grand mufti as do Australia and Russia.

In her recommendations to politicians on how to reboot Britain’s relationship with its Muslims, Warsi returns to the main reason cited by violent jihadis for their terrorist acts, namely foreign policy. UK foreign policy, she argues, should be determined by Britain’s principles and values. Is it not hypocritical, she asks, that the government will not engage domestically with Wahhabi-inspired groups and yet, at the international level, Saudi Arabia, the home of Wahhabi Islam, is embraced as a strong ally? At the same time, Warsi says, more clarification in the law is needed to spell out who Brits fight for. It should be an offence, she urges, to fight for a nation other than our own.

This book is not a memoir, but Warsi’s personal experience in and out of government gives it richness and vitality. It is as enjoyable to read about her devout, enlightened mother as about the pivotal points in her political career. In seeking to end the divide between government and community, it delivers a thrilling and satisfying punch to the Prevent strategy that is a stirring call to end the injustice of Islamophobia.

•Leila Aboulela’s The Kindness of Enemies is published by Weidenfeld & Nicolson.