Jesus: The Man and the Metaphor

Once upon a time, there was a man named Jesus, and the rest, according to Reza Aslan’s new book, Zealot, is history. When Reza Aslan treats us to the un- romantic version of Jesus of Nazareth who walked on land, as opposed to the romantic version of a Jesus Christ who walked on water, I have a blasphemous urge to ask, what does reality have to do with it? I am not saying that religion is myth; I am just saying what Reza Aslan himself confirms. That history is about facts, not truths. And Religious truth is not about what actually happened, but about what we believe actually happened. Truth, the kind that is timeless, the kind that transcends circumstances, is always couched within a story. 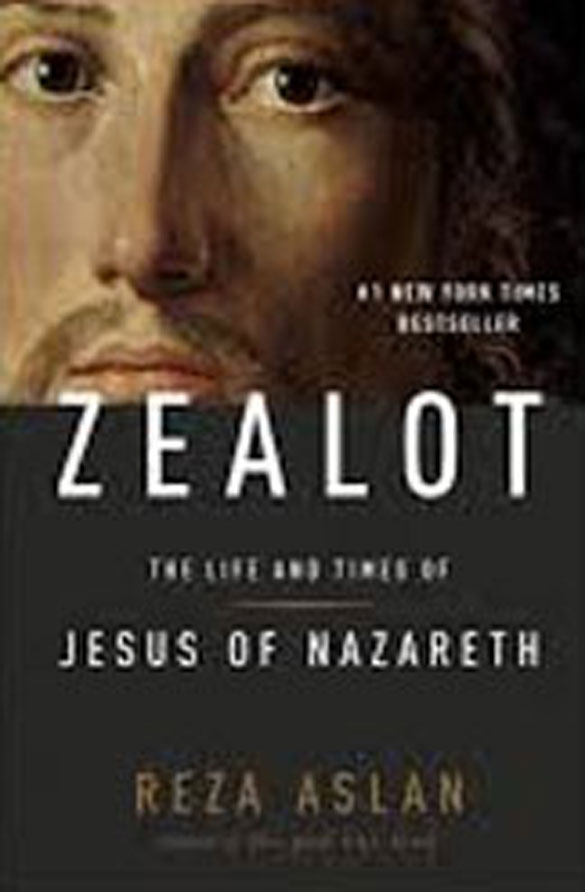 What is truer than truth? The answer - A story

So when you expose a reader to what goes on behind the scenes, you not only perniciously destroy the magic, but you tend to destroy the meaning. Its not unlike watching a spectacular movie only to be given a play by play of how the special effects were fabricated. And I just want to know, where my happy ending for Christ’s sake is. No really, for Christ’s sake, not mine.

Because to be fair, long before I read Reza Alan’s book, I already knew about the historical Jesus. The Jesus that is human, not divine. The Jesus that was sent to liberate the Jews from Roman occupation, and fulfill, not abolish the law. I knew that the early Christian church transformed Jesus from a revolutionary to a spiritual figure and memorialized him with universal principles like “love your enemy.” I knew that the “son of God” was a designation reserved for Israel’s king. And I may have known that the identity of Jesus became a contest between Paul, who dismissed the Law of Moses as irrelevant to salvation, and James, who said that the law was a requirement of belief in Jesus Christ. And I thought everyone knew, that although Paul had never met Jesus, it was Paul’s version, which ultimately prevailed, when the council of Nicaea codified the teachings we now refer to as Christianity.

So why am I so disenchanted? Because although I had already been introduced to the historical Jesus, I never had the impulse to share this Jesus with anyone else. I prefer to keep the historical Jesus on the dusty cobwebbed bookshelves of academia where he belongs. I, by virtue of being a Muslim like Reza, am obligated to believe in the Immaculate Conception but not the Crucifiction. Post history lesson, I am now forced to contend with the immaculate misconceptions surrounding a historical Jesus.

The truth is, I love Jesus, not the man, but the metaphor, not the revolutionary Jesus, but the spiritual one. And I do not like the idea that history can take that away. When the council of Nicea issued its official creed, they were not stealthily doing so to suppress political dissent, they were just upholding majority opinion at the time. Paul was popular. He was popular because he divorced Jesus from the Jewish religion and provided gentiles with a theology they could embrace.

And who could blame them. Jesus the metaphor of peace and love, minus the law is an approachable Jesus. He is a Jesus that a Muslim like me not only loves but can also channel, even if I am constantly reminded by my, ‘Jesus Loves You’, bumper sticker wielding, bible belt community , that Jesus does not love me back. That’s okay, because in the spirit of Jesus, Paul’s Jesus, I forgive them. I can afford to forgive just as they can afford to forget that no one can or has ever had a monopoly on Jesus, not even intellectual giants like Reza Aslan. Jesus is as Jesus lovers do.

The irony and perhaps the unintended consequence of Reza Aslan’s attempt to uncover the true identity of Jesus of Nazareth was the resurrection of Jesus the Christ. Because only after we are done learning about Jesus the man, does this book evolve from a history book, to a book about the human capacity to connotate abstract concepts, like salvation, from concrete, otherwise mundane events, like life and death. Only then does it become a book about how it is the subjective consensus of the majority that determines the final verdict on religion and God, and not history. Only then does it become about why big truths can and do override inconvenient facts.

The big picture is that salvation is not the concrete fulfillment of prophesies, which Jesus did not fulfill. The bigger picture is that salvation is not about calculating ways to secure a piece of heaven’s real estate. No, salvation is about the capacity of individual minds to inspire the collective consciousness. It’s about delivering metaphors, which will salvage us from the grim reality of life on earth. In the case of the Christian narrative, the bigger picture is that Jesus the man, does not save, but Jesus the metaphor, saves every single day and till the end of time. Jesus saves by intervening in the hearts of men and women with his radical call to mercy. Jesus saves by stopping us from perpetuating the vicious cycle of vengeance which is the most common and destructive narrative in human history.

For Jesus did not fulfill the prophetic vision the Jews were expecting. He did something much greater. He taught us that religion is a metaphor. Not to be defined by its history or its heretics, but by the collective and subjective consciousness of its adherents. He taught us that religion is the art of selective perception, where compassion should override conflict.

And when I say he, I do not just mean Jesus, and I do not just mean Paul. I also mean we, as in we the people, yearning to be free from the vicious cycle of self-fulfilling and self negating prophecies. For he and they and we are one.

That is the point of religion that history cannot make.

Religion can only survive as long as it breathes through the hearts and minds of its adherents. Ironically this book of history may have had the opposite of its intended effect. For rather then demystifying religion by inundating us with facts, It has served as a reminder that religion must depend less on facts and more on the three R’s of religious jurisprudence: reality, revelation, and romance, the rest dear reader, is (just) history.

Inas Younis is a freelance writer residing in Kansas. She has written for Muslim Girl Magazine and her work was featured in the anthology Living Islam Out Loud. She contributed this article to New Age Islam.