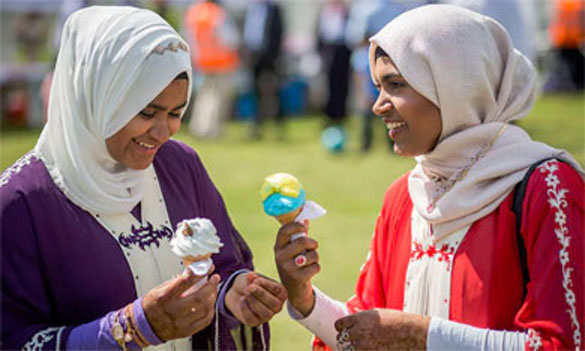 hey say you shouldn’t judge a book by its cover, but in this case they’re wrong. In the foreground is a young woman with fuchsia lipstick, Jackie O-style sunglasses and a colourful headscarf. Behind her is a young man, with a hip, trimmed beard, headphones jammed in his ears and one hand casually resting in his pocket. 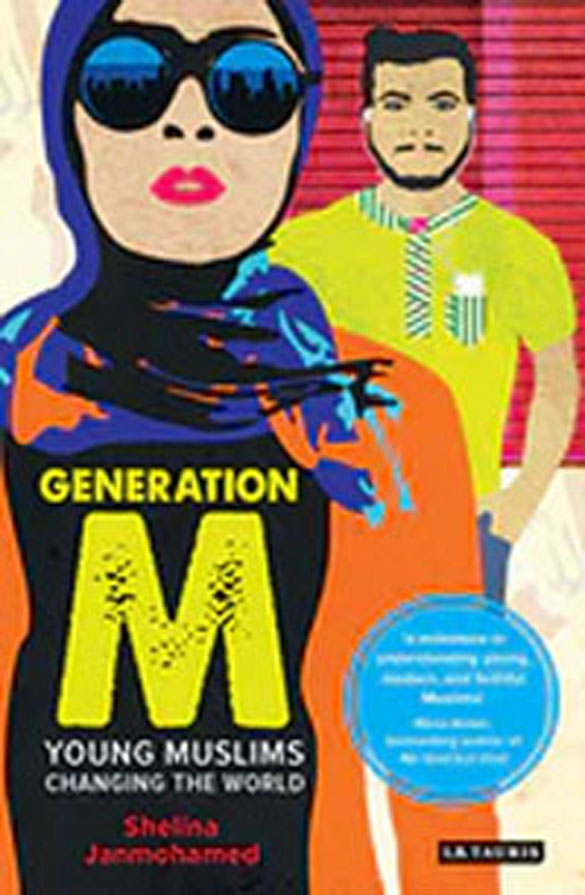 The cover of Generation M: Young Muslims Changing the World by Shelina Janmohamed

They are part of Generation M, and the eponymous book, subtitled Young Muslims Changing the World, is the first detailed portrait of this influential constituency of the world’s fastest growing religion. According to author Shelina Janmohamed, they are proud of their faith, enthusiastic consumers, dynamic, engaged, creative and demanding. And the change they will bring about won’t depend on the benevolence of others: instead, the Muslim pound, like the pink pound before it, will force soft cultural change by means of hard economics.

To demonstrate all that, the cover image was crucial. “When you’re talking about Muslims in particular, but actually people of religion in general, the images you get are really quite depressing,” she says over coffee and baklava in her garden in the outer suburbs of London. “But I think this really captures it. It’s bold, it’s vibrant, the woman’s got so much attitude. They are exactly the kind of people I’m writing about.”

Janmohamed recalls going into a bookshop some years ago. “They had this display of books about Muslims, and it was all misery memoirs of women in veils with cast-down eyes who’d been kidnapped and sold, and people riding on camels in faraway deserts,” she says.

“But young Muslims are crying out for a voice to say this is not what we’re like, we do ordinary things like everyone else, and we have interesting things to say – particularly when the conversation is about Muslims.” There are precious few mainstream publications about the experience of being a young Muslim, beyond politics and theology, she says.

Generation M are the Muslim millennials, the global generation born in the past 30 years, but with a twist. Unlike their Christian counterparts in the US and western Europe, most of whom are turning their backs on organised religion, Generation M has “one over-riding characteristic, which is that they believe that being faithful and living a modern life go hand in hand, and there is absolutely no contradiction between the two,” says Janmohamed.

In the book, she writes: “Their faith affects everything, and they want the world to know it. This is what sets them apart from their non-Muslim peers. It’s the single factor that will shape them and a world that they are determined should cater to their needs … They are a tech-savvy, self-empowered, youthful group who believe that their identity encompasses both faith and modernity.”

The demographics depict an extraordinary trajectory. In 2010, there were 1.6 billion Muslims in the world, a figure forecast to grow by 73% in the next four decades – more than double the general rate of growth. By 2050, according to the Pew Research Centre, there will be 2.8 billion Muslims globally, more than a quarter of the world’s population.

Of the 11 countries expected to join the world’s largest economies this century, six have overwhelmingly Muslim populations and two have big Muslim minorities. By 2050, India will have the largest Muslim population in the world, at an estimated 311 million, although they will still be a minority among the country’s vast numbers. Muslim minorities in Britain, Europe and North America are young, affluent and growing. One-third of all Muslims are under the age of 15, and two-thirds under 30.

The Muslim middle class is expected to triple to 900 million by 2030, driving consumption as well as social and political change. Their spending power is enormous: the most recent State of the Global Islamic Economy Report forecasts the halal food and lifestyle industry to be worth $2.6tn by the end of this decade, and Islamic finance is on a similar trajectory. Muslim travel could be worth $233bn. In 2014, Muslim fashion was estimated to be worth $230bn, and $54bn was spent on Muslim cosmetics.

“Through their sheer numbers, their growing middle-class stature, the shift of economic and political power towards the Middle East and Asia, home to most of the world’s Muslims, through the Muslim minorities that act as influential and well-connected leaders, by the inspirational force of their faith and their refusal to accept the status quo, Generation M are determined to make change. And what a change it’s going to be,” writes Janmohamed.

She charts the beginnings of this change. The demand for Halal (permitted) products has been the impetus for growth in a range of businesses, such as food, fashion, cosmetics and travel. Among dozens of entrepreneurs cited in the book are the Radwan family, who started an organic Halal farm in Oxfordshire; the producers of non-alcoholic beer – a sector that grew 80% in the five years to 2012, according to the Economist; Shazia Saleem, who launched ieat, a range of Halal ready-meals including shepherd’s pie and lasagne, which are now sold at Asda, Sainsbury’s and Tesco; and “a whole new Muslim fashion industry”, incorporating online retailers, video bloggers, catwalk shows and haute couture.

But Generation M, according to the book, wants to go beyond halal to tayyab, which roughly translates as “ethical and wholesome”. They want the entire supply chain of production and consumption to have integrity. “Resources must be properly respected, workers in primary industries must not be exploited. Sustainability and renewability are part of the Islamic idea of ‘stewardship of the Earth’, which Generation M eco-Muslims … are championing.”

According to Janmohamed, this Muslim millennial generation has been shaped by two monumental factors. One is the events of the past 15 years, since 9/11, and the global response to Islamic extremism and terrorism; the other is the internet, described in the book as “the glue that binds [Generation M] together and creates the critical mass that turns them into a globally influential force”.

The internet has also, she tells me, “given space for [traditionally] marginalised voices within the community – younger Muslims and women – to express their views”.

Among those views are frustration and resentment at being defined by their Hijabs or being told they are oppressed by their faith. Janmohamed quotes Azra, 20: “I’m a young Muslim woman. I am not oppressed by my hijab, I’m liberated by it. If you don’t understand that, that’s completely fine, you don’t need to … The emotion you’re seeing in my eyes is not a plea to ‘help me’ but one for you to take your self-righteous bullshit and shove it up your arse.”

Rather than being downtrodden and subjugated, Muslim women are experiencing increasing empowerment in education, employment, public life, marriage and childbearing, says Janmohamed. “If we were to pick a face that captures the global pace of change, it would most likely be a Muslim woman – she is part of the largest population, in nations where change is happening fastest, and in the segment where change is most potent. In short, Muslim women are where it’s happening.”

Although beyond the cusp of Generation M at 42, Janmohamed in many ways embodies the young Muslim woman she describes.

She was born in London to immigrant parents who arrived in the UK with a suitcase and £75 in cash, and she went to a school at which there were few non-white faces. “Religion was important in our family – I remember my parents praying and fasting, going to the mosque was extremely regular; the Muslim community they were part of was the foundation of the family’s social life. But at school, I spent my time hiding my hennaed hands, not telling people I was eating curry at home, being very shy about being Muslim.”

Only when she went to Oxford did she start to wear a headscarf. “I found university a liberating experience. I got to explore who I was, and part of that was my Muslim identity, which had been very suppressed at school.”

After university, she joined a graduate trainee scheme in marketing, and later spent a year working in Bahrain, which “opened my eyes to the global experience of being Muslim”. She returned to the UK shortly before 9/11, and following the London bombings in July 2005, began writing a blog “talking about what it’s like to be British and Muslim and a woman. It felt like that conversation, about someone who straddles different heritages and feels comfortable in all of them, just wasn’t being heard.”

The blog led to a book, Love in a Headscarf, published in 2009, about her 10-year quest for love via the route of a traditional arranged marriage. Janmohamed was headhunted to help launch Ogilvy Noor, a division of advertising and marketing agency Ogilvy & Mather, which advises brands on engaging with Muslim consumers.

Ogilvy hired her when she was eight months pregnant with her first child, and Generation M was largely written during her second pregnancy and since the birth of her younger daughter 18 months ago. In the book’s dedication, Janmohamed writes: “To my girls. Because you can do anything. Take it from Mummy.”

Generation M, she says, has high aspirations. “They want to be astronauts, you’ve got fencers at the Olympics and ice skaters going to the Winter Olympics, female air crew for Brunei airways – these are young people who are really battling the fact that they have aspirations that should be unfettered versus a reality that is trying to confine them to a particular box.”

But, she acknowledges, not all young Muslims are Generation M. Inclusion does not depend on disposable income or level of education, but sharing the characteristics of faith and modernity. “Their counterparts might be called the Traditionalists … more socially conservative, believing in maintaining harmony, more deference to authority and, as their name suggests, trying to hold firmly on to what they see as the good elements of family, community and tradition,” she writes.

And a few young Muslims, of course, become radicalised, hijacking Islam for violent extremism and hatred, the polar opposite of Generation M.

I ask her who the book is aimed at. One of her goals was to offer a platform for Generation M, she replies, “for people to have their voices heard”. “So there’s a recognition of their own identity, a consolidation of who they are, how they talk to one another.”

Then, she adds: “There’s a conversation for the wider Muslim community to have, to understand some of the dynamics that are happening within it, some of the challenges young Muslims are facing and how they can be resolved.”

But the book is also – and perhaps mainly – for a wider audience. “People who work in business, politics, culture, development. The UK [Muslim] population is just shy of 3 million, the European population is 50 million and growing, there’s a worldwide population of 1.6bn. I think anyone who’s quite serious about understanding what’s happening around the world has something to gain.”

And the marketing executive in Janmohamed wants global brands and multinational corporations to wake up to the power of the Muslim pound, dollar, rupee, rupiah or euro. “Brands have been a little bit over-cautious,” she says, pointing out that business is not immune to prevailing tropes and stereotypes. “It seems to be a really radical idea that Muslims actually buy stuff. Muslims are saying: ‘Hello, we’ve got lots of money to spend, we’re young, we’re cool, please can you deal with us in the same way you deal with everyone else?’”