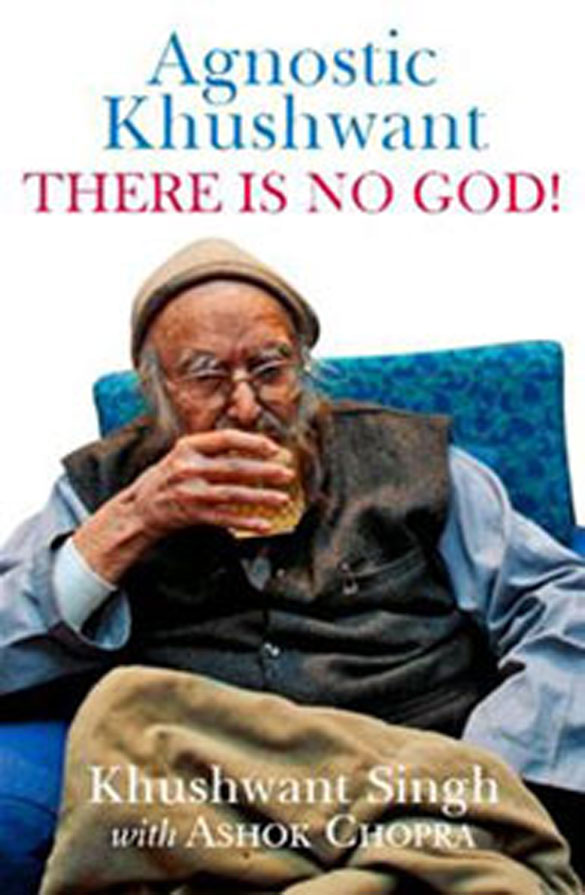 Name of the Book: Agnostic Khushwant—There is No God!

He’s acclaimed by many as one of India’s most ‘successful’ writers, but if you unthinkingly believe what they say you might well be tempted to modify your opinion about him at least somewhat on reading this book. You might, by the time you are over, be firmly convinced that Singh ought to stick to subjects that he is rumoured to know best: wine and women and ribald jokes. At the same time, however, you might also appreciate that there is much in Singh’s critique of popular religiosity that deserves our attention.

This book is a collection of random essays on issues related to religion written over the years and seemingly hurriedly put together under a single cover. Contrary to the impression that the book’s title conveys, this isn’t a well-argued case for agnosticism. In fact, at times you aren’t even sure of what Singh’s fundamental argument is, and in some places Singh himself seems as confused as he makes you to be. Thus, he announces, in the very title of the book, that he is an agnostic, but, at the same time (again in the title itself) he goes well beyond agnosticism to insist that God is a complete fiction. Apparently, he doesn’t understand or appreciate the difference between agnosticism and atheism, which he seems to use interchangeably. Then again, while effectively consigning religious scriptures to history, Singh devotes more than half his book to discussing what he perceives as their literary merits. You can’t be blamed, then, if you are somewhat disappointed at discovering that the book doesn’t quite do justice to its bombastic-sounding title.

Much of the book consists of short chapters (possibly published before as newspaper articles) wherein Singh extols what he regards as the beauties of various religious scriptures and the edifying lives of some religious personages, thus indicating that even an atheist can discern some things of value in religion. But even as this is somewhat sobering, pages after pages in fulsome praise of scripture and pious men don’t quite fit into a book that purportedly aims—or so its title suggests—at a fundamental critique of religion.

In other chapters, Singh passionately—and justifiably—exposes the hypocrisy and corruption often associated with religiosity: widespread belief in the power of rituals, sacrifices and pilgrimages in the belief that they can earn forgiveness for sins; the cult of god-men, who claim miraculous powers and special access to God or other supposed supernatural beings; the avarice of priests and clerics, for many of whom religion is simply a means of livelihood and an easy way to exercise power over the credulous. Pained at the horrors commonly associated with lived religion, Singh rightly insists that we now have just two choices: to give a ‘totally modern reorientation to religion or scrap it altogether.’

It is in a lengthy essay devoted to a critique of the phenomenon of religion as such and to his appeal for a functional alternative to it that Singh is at his proverbial best. Here, Singh reflects on his long association with, and ambivalent feelings towards, religion, which, he says, led him to evolve a ‘personal religion’ for himself, shorn of what he regards as the problematic assumptions and beliefs of conventional religions. Although Singh insists he doesn’t believe in God or other such unseen beings or forces, he thinks most people still have an emotional need for some sort of belief to keep them alive and sane. Traditional religion, so he contends, have utterly failed humankind, and hence he stresses the need for a new religion, which he proceeds to invent. Religion, Singh seems to argue, is a necessary fiction that most people simply cannot do without, and hence the need for a new religion suited to the ethos of our times.

The religion that Singh concocts and offers for our consideration has no room for the concept of a creator God (which, Singh wrongly contends, is the basis of all religions). Singh argues that notwithstanding claims to the contrary, we can never be sure if God, as the religionists imagine ‘Him’, is indeed a reality, and if the cosmos does, in fact, have a creator. Nor do we know what, if anything, happens to us after our deaths. Speculating about these is pointless, and such matters have no room in the religion that Singh devises. To critics who might contend that excising God and notions of the hereafter from religion would mean giving free reign to our base desires and drives, Singh contends that religious belief need have little or no bearing on one’s morals: you can be a consummate sinner-believer or a saint-like disbeliever, and your beliefs or lack of them need not make any difference whatsoever to your moral worth.

In Singh’s ‘personal religion’ the founders of various religions would be regarded as simply notable historical personages or exceptional human beings—but definitely not the almost deified figures armed with supernatural powers that those who claim to follow them have made them out to be. Accordingly, as Singh puts it, they would be accorded due respect ‘as important historical personages who did good to humanity. But nothing more.’ To give them a status that they didn’t claim for themselves isn’t quite the right thing to do, Singh tells us.

Singh’s religion would radically alter the place and role of scriptures in popular religiosity. Singh regards scriptures as unscientific, tediously repetitious, and boring. He also claims that they lack much literary merit (Why, then, one is tempted to ask, does he devote more than half this book to an appreciation of what he considers their artistic beauties and positive ethical concerns?) Yet, at the same time, he believes they may serve a useful purpose in ensuring social stability through their moral commandments. He suggests that in future the scriptures be treated simply as historical writings and cease to be the subject matter of prayers and rituals. Even if you take your scriptures seriously, you won’t deny that there is merit in Singh’s contention that scriptures needed to be understood, rather than simply recited parrot-like.

As for places of worship, which work to create and reinforce a sense of community identity as well as to sustain and promote the authority and power of priests and clerics, Singh has interesting things to say. He argues that the only legitimate place of worship is one’s home. We already have too many places of worship, he says, and he suggests that the Government should forbid the building of any new religious structures. He goes so far as to comment that places of worship would serve a better purpose than they presently do if they were converted into museums, schools, colleges and historical monuments.  Disgusted at the abuse of religion for political ends and stirring hatred against other communities, Singh also urges the government to refuse permission for allowing the use of public spaces for religious gatherings.

Singh’s personal religion has no room for prayer and meditation. Singh thinks that rituals are simply useless mumbo-jumbo. Even criminals engage in all sorts of elaborate rituals and prayers, he says, claiming that they are not necessary for moral improvement or ethical advancement. He may be somewhat right there, but his impatience with religion (other than the one he has invented) blinds him to alternate possibilities and meanings of devotional practice other than importuning and flattering supposed supernatural beings. Of worship as a means to express gratitude, love, compassion and concern for the whole of the cosmos and adoration of the mystery behind existence Singh seems to know or understand nothing. Since his vision seems firmly grounded in crass materialism, he can only see prayer and meditation as a waste of precious time, which, he glibly comments, could be more profitably used to engage in work in order to produce material benefits which a desperately poor country like India, he says, needs much more of. Work for this purpose, he comments, is true worship. If you know that Man doesn’t—or, rather, shouldn’t—live for bread alone, you’ll easily appreciate that Singh and you belong to two almost entirely distinct cognitive worlds. Yet, you might still note some merit in Singh’s point that working for others—‘social work’—should take the place of rituals, although you may not entirely agree with it.

You’ll be even more convinced of how hopelessly ignorant Singh is about much that he presumes he can pontificate about when you encounter his views on meditation. He dismisses meditation as a modern ‘fad’, dabbled in by folks who don’t wish to appear to be hopelessly traditional and orthodox. He pompously brands meditators who experience peace of mind through their practice as being deluded. Peace of mind, he declares, ‘is a sterile concept’—something that might be useful to people suffering from mental disturbance or hypertension but which is inimical to ‘creativity’, which, Singh controversially claims, is a product of ‘highly agitated minds, at times on the verge of collapse’. Obviously, and needless to say, Singh seems to know nothing at all of meditation himself, nor, possibly, of true creativity, too.

Even if you are a hardened believer there’s much that you might find in Singh’s fundamental re-thinking of the very essence or ethos of religion that you could resonate with. Religion, he argues, must inspire people to refrain from harming all living beings---not just fellow co-religionists or fellow humans but animals and plants, too. Religion must also make you deeply concerned about future generations as well—through respecting the environment, for instance, and carefully planning the number of members of one’s family, thus limiting one’s burden on the earth’s limited resources.

Shorn of all beliefs that cannot be confirmed by reason and justified by universally-acceptable morality, religion, Singh argues, must be fundamentally refashioned simply into a sensible and ethical way of living. ‘A good life is the only religion’, Singh says, a conclusion which even his most bitter critics, who definitely won’t accept much that he says in this book, may not disagree with.

The problem, however, lies in how the ‘good life’ is defined, for everyone seems to have a different interpretation of it. Singh’s isn’t the only one, and nor is it possibly the best, though that there’s at least something in it that even ardent religionists can profit from there can be no denying.