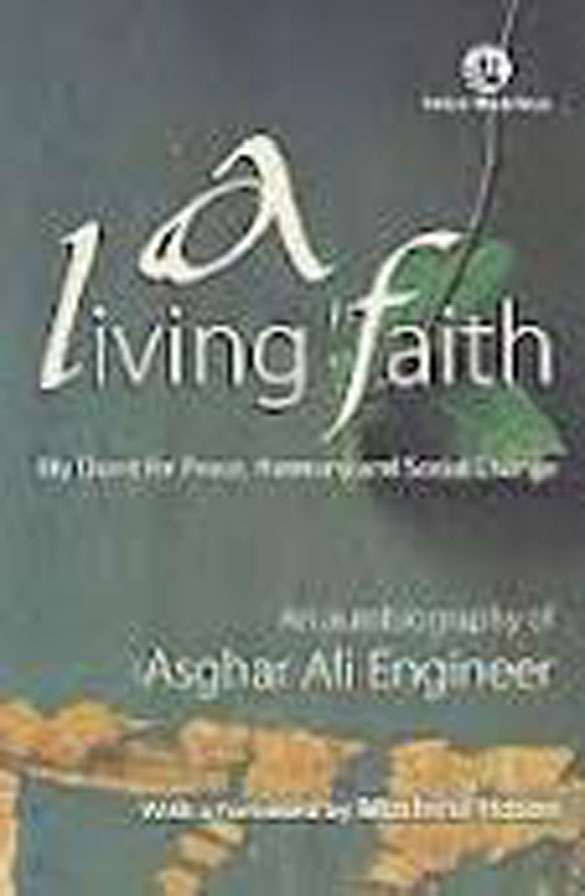 Name of the Book: A Living Faith—My Quest for Peace, Harmony and Social Change

Surely, I am convinced, the story of every single human being, no matter how insignificant he or she may be considered by others to be, is worth listening to. Everyone’s life is, at a fundamental level, really quite the same: being a quest for meaning and purpose and a series of experiences that oscillate between pain and pleasure. Learning about how others have sought to supply their life with meaning and have dealt with the pain and pleasure that have come their way can help in making one’s own life more meaningful—or, to put it differently, somewhat less meaningless. That is the principal worth, I would think, of reading an autobiography. Readers approaching scholar Asghar Ali Engineer’s autobiography with that intention are sure to find much of it inspiring.

Mumbai-based Engineer is well-known in social activist circles, in India and abroad, as someone who has spent years trying to promote inter-communal harmony. He is also thought of as somewhat of an original Islamic scholar, who has sought to develop understandings of his religion in response to contemporary human rights sensibilities and to decry widespread human rights violations by those who claim to be Islam’s most ardent defenders. He is a prolific writer, and, even though he is well into his seventies, he continues to travel in India and abroad, seeking to promote better understanding and relations between his fellow Muslims and people of other faiths—which, almost everywhere, seem to be getting from bad to worse.

Engineer’s account of his early life is riveting—this is the portion of the book I enjoyed the most. He recounts, albeit only too briefly, his growing up in a lower-middle class family in a small town in Madhya Pradesh and being educated in government-run Urdu- and Hindi-medium schools. Life for the son of a mullah or priest belonging to the Bohra sect of Shiah Muslims wasn’t exactly easy. The community was deeply conservative. Although fairly prosperous, the Bohras, Engineer tells us, lived under slavery-like conditions, being ruled by the Syedna, the Bohra head-priest, who considered himself as their lord and master. The Syedna’s every word was—and still is—considered to be divine command by his followers.

It was the Syedna’s autocracy, Engineer reveals, that first triggered within him a deeply-felt horror of injustice. In his youth, Engineer was forced, against his will, to prostrate before the Syedna, and was sharply abused for his reluctance to do so. Deeply repelled by this incident, Engineer began to decry abuses of power by the Syedna and his family, gradually emerging as one of the leaders of what is called the ‘reformist Bohra movement’, while at the same time working in Mumbai as an engineer (which explains his surname).

Taking on the Syedna and his coterie was no easy task, Engineer explains, for although many Bohras were fed up of the Syedna and his ways, they didn’t dare criticize him openly for fear of being excommunicated from the Bohra fold. Nor were political parties interested in taking up the reformists’ demands, Engineer says, for fear of losing Muslim votes. Many ‘leaders’ of non-Bohra Muslim sects, who might have found the Syedna’s practices a violation of their religion, actually chose to side with him—Engineer claims they were bribed to do so.

Engineer’s account of the emergence of the Bohra reformist movement, which demanded internal democracy, an end to the dictatorship of the Syedna and the scrapping of a slew of laws and taxes the Syedna had imposed on the community—is deeply moving, highlighting the courage that drove this band of reformers on and the enormous opposition that they had to contend with. Most of the pioneer reformists, including Engineer himself, were excommunicated from the Bohra fold by the Syedna. They could have no social relations whatsoever with those Bohras, including their close relatives, who remained, often due to fear, faithful to the orthodoxy. For his role in galvanizing and spearheading the movement, Engineer had to pay a heavy price: several attempts on his life by his orthodox opponents.

Engineer has been a consistent supporter of inter-communal relations in India, and his memoirs devote several pages to his role in investigating various communal riots, critiquing communalism through his voluminous writings on the subject and organizing workshops to promote communal harmony. What emerges from his brief description of these activities is a person who is deeply concerned, at a very fundamental level, with the terror and hatred unleashed in the name of religion and who feels impelled to do something about it.

Not everyone will, however, agree with Engineer’s diagnosis of the communal problem in India, though. He naively suggests that religion per se has nothing to do with it, and argues that, instead, it has almost everything to do with politics—as if religion could ever be conceived of in a politically neutral way or as if religion can ever operate in a political vacuum. In thus seeking to absolve religion of its role in fanning conflicts he seems to conveniently ignore the manifold and all-too-widespread interpretations of religion that openly champion supremacism and condemn other religions and their adherents as enemies of God. If at all he does refer to this issue, he claims that these interpretations of religion are false and politically-motivated and that the one he proffers supposedly represents religion in its ‘true’ spirit. His own understanding of Islam—which not many Muslims accept—he seems to argue, reflects ‘true’ Islam, in contrast to the versions of the faith of his Muslim critics, but he does not tell us what gives him the moral authority to decide that this is quite so and to decry understandings of Islam of those who differ with him as erroneous. Perceptive readers might consider Engineer’s claim to know and articulate ‘true’ Islam as against his Muslim and other critics as reflecting precisely the same cognitive elitism or intellectual arrogance that he decries in his orthodox or fundamentalist opponents. Despite their differences, both he and his opponents share the conviction that they possess the ‘true’ understanding of their religion and that understandings that contradict theirs are false, thus arrogating to themselves the right to judge on such matters that are clearly outside human purview.

Even though critics may refuse to accede to Engineer’s insistence that his understanding of religion, as opposed to his critics, is the ‘true’ one, his interpretation is certainly politically useful and refreshing, at least compared to the supremacists he so vehemently decries. He talks of ‘true’ religion being all about love, mercy, compassion and commitment (not everyone will of course agree with this definition, of course and might dismiss it as romanticism or sheer apologetics) and decries the all-too-common obsession with rituals and dogmas as well as the supremacism that is almost universal among different brands of religionists, including his fellow Muslims.

The bulk of Engineer’s autobiography—almost two-thirds of the book—is a chronicle of his travels in countries in the West, Asia and Africa that he has visited, being invited there to attend conferences on religion, particularly on Islam, radicalism and inter-faith relations (Curiously, the book doesn’t even mention, leave alone have a separate section on, Engineer’s extensive travels within India.) Here, we learn about efforts at the international level, in which Engineer has played a seminal role, to promote alternate, more humane understandings of religion, to counter terrorism in the name of Islam and to build bridges between people of different religious backgrounds. While describing the dozens of conferences on such matters that he has attended, Engineer indicates that this sort of conferencing can sometimes be utterly useless, simply occasions for chatter and the exchange of pleasantries, with no follow-up at all in terms of practical action.

After devoting more than 200 pages describing his travels abroad to deliberate on issues, generally troublesome, pertaining to religion in the contemporary world, Engineer devotes less than ten pages to wind up his memoirs. In a section titled ‘Looking Back, Looking Ahead’ he reflects on what he sees as the purpose of his life—struggling to achieve social justice, promoting inter-communal harmony, building a new world, and so on. In this regard, he says, he is inspired by saintly figures in different religious traditions.

This is all very laudable, no doubt, and the reader can’t be left unimpressed by Engineer’s many intellectual achievements and activities, which he recounts for the benefit of his readers. Yet, this section appears all too brief, inadequate and abrupt. Given that the bulk of the book is about Engineer’s international intellectual activities, some readers are bound to notice the lack of any reflection on the usefulness or otherwise of such efforts in terms of practical achievement, especially in transforming people’s hearts and minds. That much such conferencing and networking is pretty much useless in terms of changing things, many of those who have long been in this business will readily concede. They will also question the worth of preaching to the already converted that much of this activity really boils down to, as well as the pious proclamations, the tireless repetition of the same banal arguments and the empty rhetoric that characterizes many—though of course not all—international academic and activist networking and deliberations on religion. Given the enormous sums of money spent on such activity at the ‘top’ end of this sector—on international travel, accommodation in five-star hotels, stipends and so on—some might point out that relatively little useful emerges from all this effort. Some might—and very sensibly—question the merit or adequacy of this sort of intellectual activity itself as a means for transforming hearts and ushering in the new world that Engineer dreams of and which he has, as he says, spent much of his life struggling for. Given his wealth of experience in the international conferencing circuit, which the bulk of his autobiography is devoted to, Engineer is just the person who could have seriously reflected on these issues of considerable import. It is a pity that he doesn’t.

Despite the book’s obvious limitations, it is, in parts, powerfully inspiring, revealing a man who has spent several decades pursuing a cause that he deeply believes in.