Name of Book: The Necessity of Interfaith Dialogue—A Muslim Perspective 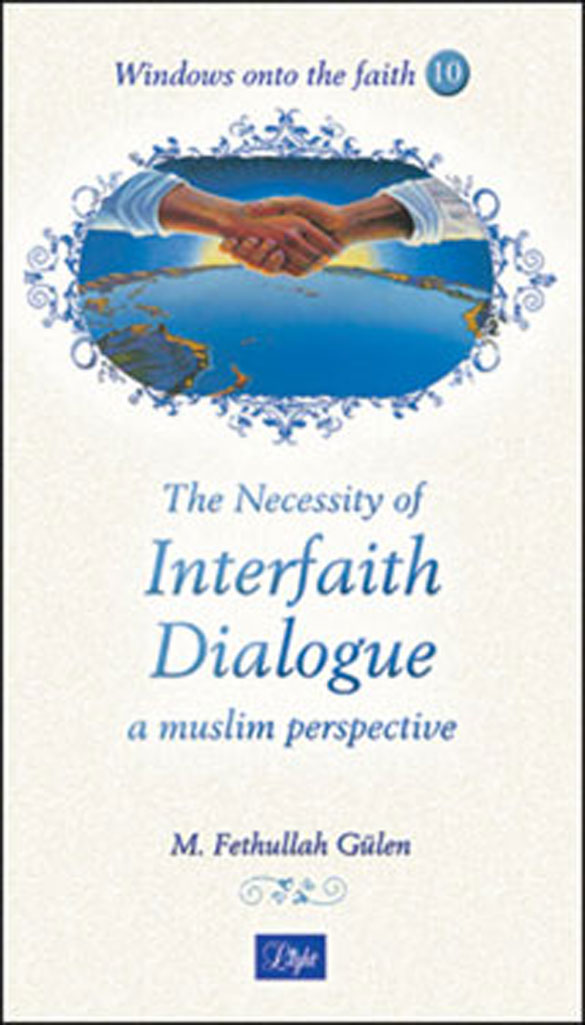 One of the most serious threats that humanity is faced with today is terror in the name of religion. And perhaps nowhere is this problem more severe than in the ‘Muslim world’. Many Muslim countries are presently racked with violence unleashed by groups that claim to represent Islam. In several countries where Muslims are a minority, violent conflicts involving Muslims and dominant communities have flared up in recent years. In this context, the need for Muslims to engage in dialogue with others for resolving conflicts and for mutual enrichment remains as urgent today as it has always been.

The well-known Turkish Islamic scholar-activist Fethullah Gulen is one of the leading Muslim advocates of interfaith dialogue at the global level. In this slim booklet, he outlines the case, from an Islamic perspective, for the need for interfaith dialogue. As he sees it, such dialogue is no luxury for Muslims that they can afford to ignore. Rather, it is an Islamic commandment.

Gulen contends that the manifold problems humanity is faced with today stem, in large measure, from the materialist worldview that threatens to overwhelm the world. This worldview, he writes, has shaken the delicate balance between humanity and nature, between people as well within individual human beings. It is only religion, he believes, that can restore this balance, reconciling the seemingly mutually-exclusive opposites of religion and science, this world and the next, body and spirit. Religion alone can erect a formidable defence against the enormous destruction wrought by the hegemony of ‘scientific materialism’ and put science in its proper place. Moreover, religion alone can bring about genuine peace between communities and within individuals. ‘Peace with nature, peace and justice in society, and personal integrity are possible when one is at peace with Heaven’, Gulen remarks.

In this regard, inter-religious dialogue has an important role to play, Gulen stresses. Given that ‘scientific materialism’ emanated from, and has almost wholly overwhelmed, the West, interfaith dialogue, especially between Muslims and Western Christians, can help highlight the necessity of religion for the very existence of humanity. Through such dialogue, Gulen seems to believe, the virtual hegemony of ‘scientific materialism’ and the destructive, dehumanizing materialist worldview might be effectively undermined. But this is not the only purpose of interfaith dialogue, Gulen explains. Such dialogue is also necessary because the very nature of religion—all religions, including Islam—demands it.

In our increasingly interlinked world, we cannot afford to remain hostile islands, cut off from each other, Gulen reminds us. There is simply no alternative today to harmony and dialogue between people of different faiths. This dialogue can be mutually enriching for all partners, for each of us has something to share that the others might gain from. For instance, Gulen suggests that through dialogue, Muslims can gain from Western contributions to science, while Westerners can benefit from the spiritual treasures of Islam, which can help extricate humanity from the morass of materialism.

Gulen points out that there are ‘many common points for dialogue among devout Muslims, Christians and Jews’—presumably because of their common Semitic heritage of their historical traditions. Although he does not specifically refer to Muslims dialoguing with people who follow other, non-Semitic traditions—such as Buddhists and Hindus—he might, one supposes, consider this as equally Islamically-valid, given that, as he acknowledges, all religions share a common ethical core, based on values such as love, respect, tolerance, forgiveness, altruism, respect for human rights, mercy, peace, brotherhood, and freedom.

Gulen reminds his readers that for a person to be regarded as a Muslim, he or she must accept all the prophets and Divine revelations sent by God to all of humanity throughout history. Muslims thus acknowledge the oneness and basic unity and universality of religion—and this is a major basis for Muslims to engage in dialogue with others.

Gulen sees the Quran as calling on Muslims to engage in interfaith dialogue. Thus, the Quran (3:64) says:

“Say: O People of the Scripture! Come to an agreement between us and you: that we shall worship none but Allah, and that we shall ascribe no partner unto Him, and that none of us shall take others for lords beside Allah.”

Worship of the one God, Gulen says, is ‘the widest statement on which members of all religions could agree’ and which could enable ‘followers of the revealed religions [to] overcome their mutual separation’. If this call is rejected, Muslims are expected to respond by stressing ‘To you is your religion, and to me is my religion’ (Quran 109:6).

Gulen suggests that the Quran not only instructs Muslims to engage in dialogue with others, but also indicates how this dialogue should be carried out—‘in a way that is best’. Thus, it says, ‘And do not argue with the People of the Scripture except in a way that is best, except for those who commit injustice among them, and say, “We believe in that which has been revealed to us and revealed to you. And our God and your God is one; and we are Muslims [in submission] to Him.”’ (Quran 29:46).

Interfaith dialogue at the level of religious beliefs is not all that is involved in relating to people of other faiths, however. Everyday social interaction between people of different religious backgrounds can often be an even more effective way of communication, understanding and bonding than verbal discussion about each other’s beliefs.

The Quran, Gulen tells us, exhorts Muslims to interact justly and kindly with people of other faiths. Thus, it says, “Allah does not forbid you to deal justly and kindly with those who fought not against you on account of religion and did not drive you out of your homes. Verily, Allah loves those who deal with equity” (Quran 60:8). The Quran also stresses that the enmity of others should not lead Muslims to swerve from justice. It says: “O you who believe! Stand out firmly for Allah and be just witnesses and let not the enmity and hatred of others make you avoid justice” (5:8).

Relating to people of other faiths on the basis of these Quranic commandments can help promote better relations between various communities and enable them to recognize each other as fellow creatures of the one God. This can go a long way in promoting meaningful dialogue and interaction among them.

If the Quran not only allows, but actually calls for interfaith dialogue, why is it that few Muslims appear to be enthusiastic advocates of such dialogue today? Gulen discusses this issue in the particular context of relations between Muslims and Christians.

One reason for this, Gulen says, is the phenomenon of perceived Western domination. In the last century alone, he quotes a study as saying, ‘far more Muslims have been killed by Western powers than all Christians killed by Muslims throughout history.’ Additionally, many Muslims think that Western policies are designed to weaken Muslim power and that the West is continuing its 1000 year-old systematic aggression against Islam. In such a context, the Church’s call for dialogue with Muslims meets with considerable suspicion. To add to this, of course, is the long tradition of Christian polemics against Islam, which does nothing whatsoever to help promote prospects for Muslim-Christian dialogue.

That said, Gulen appreciatively notes helpful signs of change, reflected in a growing number of Western scholars looking more dispassionately at Islam and the Catholic Church’s advocacy of interfaith dialogue.

Intolerant and exclusivist Islamist movements make prospects for dialogue between Muslims and others additionally difficult, Gulen indicates. He notes that most Muslim countries entered the 20th century under European domination, and Muslim peoples’ anti-colonial movements were often spearheaded in the name of Islam. This led Islam to be perceived as an ideology of conflict and reaction and a political system, rather than as a religion that addresses people’s hearts, spirit and minds. Islamist groups that presented Islam as a political ideology, programme and party, played no small role in inventing and perpetuating this (mis-)conception. Naturally, then, as Gulen says, many people, including secularists in Muslim countries, began viewing Muslims and Islamic activities as suspect.

Gulen sees—and rightly so—Muslims engaging in dialogue, including with Christians and the ‘West’—as an urgent necessity today. The first step for this, he writes, is ‘forgetting the past, ignoring polemical arguments and giving precedence to common points, which far outnumber polemical ones’. In this regard, he appeals to Muslims to recognise that the centuries-old struggle between Muslims and the ‘West’, which fuels Muslim opposition to, and resentment of, the ‘West’, ‘will never benefit Islam or Muslims’. He stresses that the ‘West’ ‘cannot wipe out Islam or its territory, and Muslim armies can no longer march on the West.’

Without naming them as such, Gulen seems to suggest that radical self-styled Islamists are a major challenge to dialogue between Muslims and people of other faiths.  He speaks of people—by which, presumably, he means Islamist extremists—who have ‘reduced religion to a harsh political ideology’ that ‘has erected walls between Islam and the West’, and ‘has caused Islam to be misunderstood’. He describes them as having adopted Islam as ‘a political ideology, rather than a religion in its true sense and function’, and so, he says, their ‘self-proclaimed Islamic activities and attitudes, especially their political ones’ are usually impelled by ‘personal or national anger, hostility and similar motives’ and not by true Islamic spirituality.

Gulen contrasts this with how true Muslims should behave. The Prophet Muhammad, he explains, defined true Muslims as those who harm no one with their words and actions, and who are the most trustworthy representatives of universal peace. Far from inflicting torment and suffering, true Muslims are ‘symbols of safety and security’—a total contrast, of course, to terrorists parading in the guise of Islam in large parts of the world today.

Gulen reminds us that hatred, vengeance, intolerance, violence, anger, refusing to respect and forgive others and so on (characteristic of self-righteous, holier-than-thou religionists who have turned religion into a political ideology) have no sanction in religion, rightly understood. (Contrary to what the radicals might insist). Moreover, such attitudes and behaviour are entirely counter-productive, no matter how much radicals try to seek to legitimize them. We get what we deserve, Gulen rightly remarks. Perhaps hinting at hate-driven extremists who dare to speak in the name of the faiths they claim to follow, he writes:

To self-righteous religionists who never tire of finding fault with everyone, but themselves, seeing others (including people of other faiths) as the source of all their woes, Gulen has these words of wisdom to say:

“Those who want to reform the world must first reform themselves. In order to bring others to the path of travelling to a better world, they must purify their inner worlds of hatred, rancour, and jealousy, and adorn their outer worlds with virtue.”

Only one who is engaged in inner dialogue, to spiritually purify herself or himself, is truly qualified to engaged in dialogue with others. Interfaith dialogue cannot make any headway if dialogue partners don’t work on themselves. One has to embody the virtues that one preaches; otherwise, dialoguing can make no headway at all. In this regard, Gulen stresses the centrality of love, altruism, gentleness, universal compassion, tolerance and forgiveness in terms of inter-personal and inter-community relationships. If we aren’t loving, altruistic, gentle, compassionate, tolerant and willing to forgive people and overlook their faults, not only can we not engage in genuine dialogue with others, but we also cannot, Gulen indicates, measure up to what our religions expect of us.

You don’t have to write a thick tome to say something profound, as this little booklet very aptly demonstrates!

One looks forward to more Islamic scholars writing more interfaith/inter-community dialogue, understanding, collaboration and solidarity, an issue of major concern in our times when it has become an absolute imperative for the very survival of the world.