The World Before Her: Two Women, Two Worlds

Very rarely do we see the world through the eyes of the heroine in Indian cinema.

Most of it, if not all, has been the hero's journey. The heroine is always playing a supporting role or a cheerleader.

More importantly, very rarely have we seen India through the eyes of the young Indian woman. 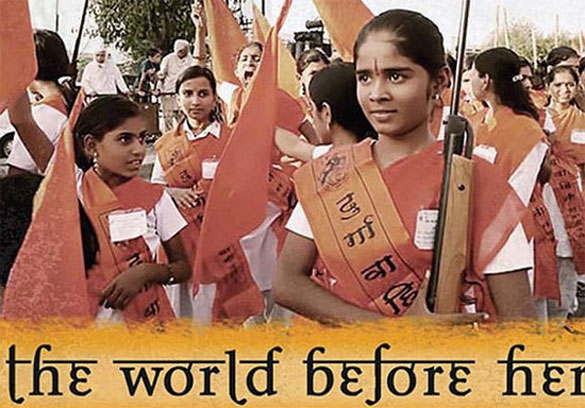 And in the context of rising violence against women, moral policing by extreme right-wing groups in the recent past and the birth of a new Indian democracy where people have elected the right into power, The World Before Her is at once a fascinating exploration of the dreams, ambition and outlook of the young Indian woman and a darkly funny expose of who we have become as a country.

This hard-hitting documentary by Nisha Pahuja that released around the country on Friday is simply the best film you will see this year.

The World before Her follows the journey and fates of two young Indian women from two very different Indians. Nineteen-year-old Ruhi Singh from Jaipur left home to be a Miss India contestant and 24-year-old Prachi Trivedi, home-schooled on right-wing ideology, is a veteran of 42 Durga Vahini camps in Aurangabad that train young Hindu girls to hate Muslims, Christians and Western culture.

As the film cuts between their lives (Ruhi's tense training days in the run-up to the finale of the beauty pageant and Prachi's training days at the Durga Vahini camp), we first see how different they are and yet slowly see that their lives are not all that different after all. They are both chasing dreams that actually live out fantasies of men and that too defined in a system, by the rules laid down by men.

Nisha's victory as a filmmaker lies in her ability to draw out candid responses from her subjects and letting us judge the truth without really trying hard to put a spin around the film.

The film does not shy away from the ugly side of their journey — if a Miss India contestant wonders if she has lost her dignity (we also see them get Botox shots and parade around in cloaks except for legs as the judges rate their legs), the RSS-schooled girl is grateful that her Dad did not kill her at birth and let her live (we see how they are taught to fire a gun and hit back and attack Muslims and Christians).

While the film is darkly funny (Prachi's father quite righteously narrates how he once stamped his daughter with a hot iron rod to teach her a lesson) and heartbreaking (we feel for Ruhi's mother as she watches the finale of the pageant) and shows us the world before the young Indian women without flinching, it also leaves us with a flicker of hope.

The fact that Ruhi's parents are proud of their daughter and offer her unconditional support shows us exactly where the change can come from. From home. Maybe Nisha is trying to say that The World before Her is always a product of the world behind her.

One can only hope that someday, Prachi's father can see what makes her happy.