The Life of a Kashmiri Woman: Dialectic of Resistance and Accommodation

The Life of a Kashmiri Woman “Dialectic of Resistance and Accommodation” 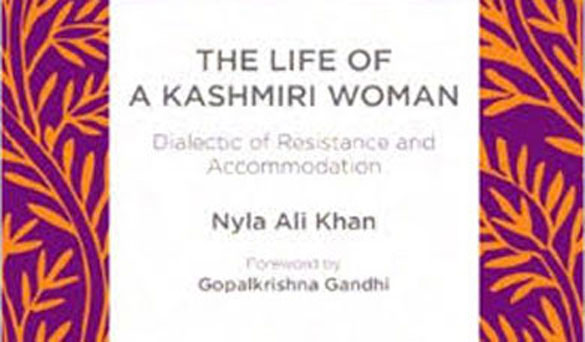 This book is a valuable addition to the history of Kashmir at a crucial juncture. It is just not simply the biography of the author’s grandmother Akbar Jehan, but an account of political turbulence that saw the awakening of Kashmiri society. Although the author makes every effort to defend Akbar Jehan and her illustrious husband Sheikh Mohammad Abdullah, the book also takes the lid off from some interesting aspects of the life of a woman who dominated the Kashmiri political scene for many decades.

Akbar Jehan is described as a woman who emerged as a symbol of resilience and resistance at a time when only tyrannical treatment could become her fate. Her journey moved alongside that of her husband, Sheikh Mohammad Abdullah, who was first to raise the banner of revolt against the Dogra monarchy. Even today, when the share of women in the Indian political space is negligible, with just 2 out of 87 members elected in the 2008 elections, Akbar Jehan appearing on the scene in the male dominated society of those times, speaks volumes about her grit and competence.

From breaking the myth about her having been married to Lawrence of Arabia to detailing how she virtually replaced Sheikh Abdullah in leading people during his incarceration, the book brings out some important aspects of Kashmiri history.

What is missing, though, is any direct account about Akbar Jehan by her son Farooq Abdullah and grandson Omar Abdullah. These two are important stakeholders in recollecting the journey of a woman who has not only shaped this house of political legacy but who according to the author was on the side of Farooq when it came to the question of replacing Sheikh Abdullah, both as political leader and as the head of government in 1982. It becomes more important in the backdrop of the father-son duo becoming virtually the sole “proprietors” of the Sheikhdom both politically and otherwise. Farooq’s insight into his mother’s life would not only have added credence to the turbulent journey but also an added flavour to the account, which the author presents more as historiography than biography.

Despite being from a well to do family that owned a chain of hotels from Lahore to Srinagar, once Akbar Jehan entered politics, she faced the perils of oppressive regimes undauntingly. “The deprivation that Akbar Jehan and her children were subjected to in the Sheikh’s long absence, and the isolation that they were condemned to might have discouraged, even distressed some, but Akbar Jehan did not cringe.” This powerful trooper kept the flag flying while the leaders of The Plebiscite Front such as Sheikh Abdullah and Mirza Afzal Beg were shuffled from one jail to another.

The author makes a case for her grandmother in order to counter the narrative against her that has dominated the political sphere for the last 25 years. Sheikh Abdullah and his family is seen, by most Kashmiris as a tool for distraction, as far as their movement for political rights is concerned. Sheikh’s sacrifices in jail and his condemnation to the political wilderness is often discounted in today’s political discourse on Kashmir, where many today see him as a “traitor”. His farewell to resistance politics in 1975 by entering into an accord with Indira Gandhi has become the final yardstick for measuring his sincerity towards Kashmir, a move that ended in the armed rebellion that took over Kashmir in late 1989. However, the author defends him saying, “I am of the firm opinion that in 1975 the Sheikh was faced with a choice that any statesman would dread having to face”. But at the same time she terms it political hara-kiri on the part of Sheikh.

While Nyla is all praise for the multifaceted personality of the subject, she fails to counter certain perceptions about Akbar Jehan. Former Director Intelligence Bureau B N Mullick in his book ‘My years with Nehru’ projects Akbar Jehan as the main “beneficiary” of Pakistani funds that flowed in to support The Plebiscite Front from 1954 till when she died. The author does try to defend her but not beyond saying that it was a conspiracy hatched by the Government of India to defame her. However, the Xerox copies of the receipts signed by “Zeenat ul Islam” (Akbar Jehan’s codename) are part of Mullick’s book. Similarly, Ghulam Ahmad, a confidant of Sheikh Mohammad Abdullah, in his book “My years with Sheikh Abdullah”, accuses Akbar Jehan of forcing her husband to throw open the doors for corruption, nepotism and favouritism. On this too the author is silent.

Nevertheless the book opens up not only a window to an unheard side of Akbar Jehan but also to a larger debate on the personalities who shaped the society’s struggle for empowerment. Here Akbar Jehan’s role as a woman who showed a path to the woman of Kashmir and took concrete steps is more than clear. She acted as a flag bearer during times when even peeping out of the windows was unheard of for women. The lyrical style of the author adds to the brilliance of this account. A must read for students of Kashmir’s politics and history.