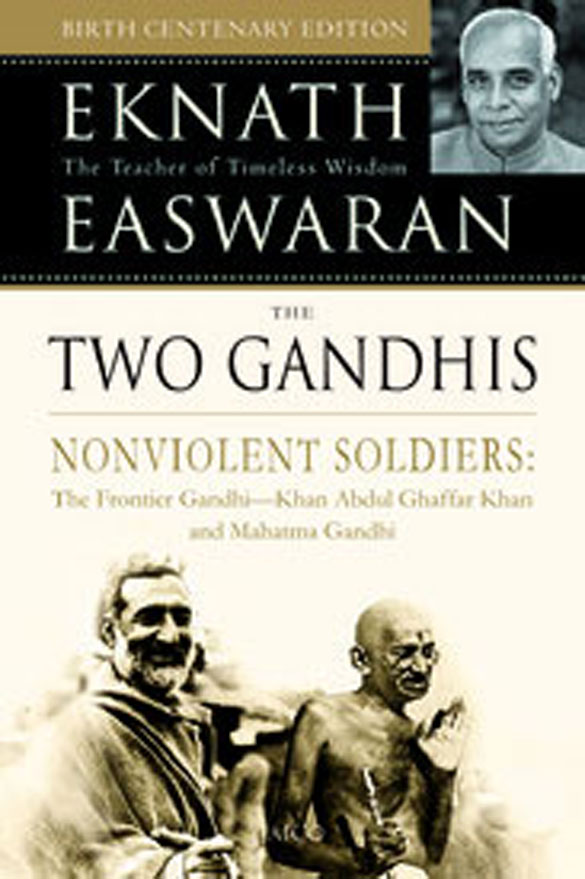 It might seem incredible given how endemic violence seems to be among the Pathans of Pakistan’s north-western frontier and neighbouring Afghanistan but there was a time not very long ago when a completely non-violent movement for personal, social and political transformation gained mass popularity among these very people, led by one of their own. In this book, noted spiritual teacher Eknath Easwaran (d.1999) provides a fascinating account of that amazing man—Khan Abdul Ghaffar Khan (1890-1988), also remembered as ‘Frontier Gandhi’ and ‘Badshah Khan’ (‘King of the Khans’).  That Easwaran, one of the most well-known and widely-loved spiritual writers of our times, should write this book is a remarkable testimony to Badshah Khan’s deep spirituality and the enduring message of his life.

Badshah Khan’s fellow Muslim Pathans, Easwaran writes, were characterised by a fierce sense of independence. Warfare was for them a way of life. He describes repeated British attempts to conquer the Pathans, depicting horrific atrocities committed by the British in graphic detail. This, along with incessant feuding among the Pathans, provided the context for the emergence of Badshah Khan as what Easwaran terms as a “Muslim St. Francis”, comparing him to the medieval Christian saint known for his compassion and love.

Easwaran provides us rich details of Badshah Khan’s life, tracing his growing involvement in efforts for social and political reform among his people, including for education and women’s rights. The British, Easwaran explains, did not take kindly to his efforts even though he was committed to entirely peaceful methods. This earned him long spells in jail over the years, often in solitary confinement. As he continued with his work among his people, he joined the Congress and its movement for India’s freedom from British rule and became a close companion of Mahatma Gandhi, in whom, Easwaran says, he recognised “a kindred spirit, a seeker who was attempting to serve God by serving the poorest of His creation.”

Badshah Khan set up a team of dedicated non-violent Pathan volunteers, the Khudai Khidmatgars (“Servants of God”), whose motto was freedom and whose aim was service. Under Khan, the Khudai Khidmatgars became what Easwaran calls “history’s first professional non-violent army—and its most improbable”. Any Pathan could join it, and members were required to take an oath, that included a promise to refrain from violence and taking revenge, to forgive those who oppressed or treated them cruelly and to contribute at least two hours a day to social work. “Non-violence was at the heart of the oath”, Easwaran explains. “It was directed not only against the violence of British rule, but against the pervasive violence of Pathan life.”

The Khudai Khidmatgars were entirely Muslim and the Movement was based, as Easwaran describes it, on “the ancient Islamic principles of universal brotherhood, submission to God, and the service of God through the service of His creatures.” In a short while, it turned into an immensely popular anti-colonial movement in the Frontier Province. Its brave men and women defied savage British repression—even brutal killings of large numbers of their people—but refused to give up on their oath of non-violent resistance.

Badshah Khan’s activism was deeply linked to his spirituality. Easwaran quotes Gandhi’s secretary, Mahadev Desai as writing about him: “The greatest thing in him is, to my mind, his spirituality—or better still, the true spirit of Islam—submission to God.” Badshah Khan, Easwaran explains, understood Islam as based on amal (selfless service), yaqeen (faith, or “an unwavering belief in the spiritual laws that underlie all life”) and muhabbat (love, in order to “transform human affairs”, a “spiritual force which, when drawn upon systematically, can root out exploitation and transform anger into love in action”). According to Easwaran, he based his life on this principle, and had his example been better known, he says, “the world might come to recognize that the highest religious values of Islam are deeply compatible with non-violence that has the power to resolve conflicts even against heavy odds.”

Khan’s passionate commitment to nonviolent resistance grew out of his religious faith and reflected his inclusivist understanding of Islam, which led him to easily identify with people of goodwill in other religious communities too. That was possibly why he was so attracted to Gandhi and his work. Easwaran devotes several pages to this close relationship between the "two Gandhis", as he calls them. We learn, for instance, about Gandhi’s visits to the Frontier Province, touring the area along with Badshah Khan, and lending support to the movement he was leading.

Easwaran tells us that Gandhi referred to him as “unquestionably a man of God”. Badshah Khan and his elder brother spent considerable time at Gandhi’s ashram, where, Easwaran says, their ‘childlike simplicity’ ‘charmed’ everyone. Gandhi was so impressed by the Khan brothers that he remarked, “The brothers’ friendship seems to me to be a gift from God”. “The more I knew of the brothers”, Gandhi wrote about them, “the more attracted I felt towards them. I was struck by their transparent sincerity, frankness and utmost simplicity. I observed too that they had come to believe in truth and nonviolence not as a policy, but as a creed.” He noted that he found Badshah Khan to be “consumed with deep religious fervour”, adding, “His was not a narrow creed. I found him to be a universalist.”

A committed Muslim as well as someone who was dedicated to Hindu-Muslim harmony, Badshah Khan was passionately against the Muslim League and its demand for the partition of India. Even when many Congressmen finally agreed to Partition, Easwaran tells us, he remained firmly opposed to it. When Partition finally happened and Sikh and Hindu minorities in the Frontier Province were attacked, he helped protect them. With Partition, the Frontier Province became part of Pakistan despite Badshah Khan’s opposition to it, and in the new country he was repeatedly jailed by the authorities (In all, Easwaran says, he spent 30 years in jail, that is, every third day of his life).

Given the horrific violence that continues to tear apart the region where Badshah Khan lived and worked, as well as much of the rest of the ‘Muslim world’, Badshah Khan’s story is of immense contemporary relevance. As Easwaran remarks:

​”Wherever civil war or ethnic violence rages, but especially in the Middle East, Badshah Khan offers a path to peace. A devout Muslim, he showed in his life a face of Islam which non-Islamic countries seldom see, proving that within the scope of Islam exists a noble alternative to violence. His non-violent army, the ‘Servants of God’, was entirely Muslim, and based upon the ancient Islamic principles of universal brotherhood, submission to God, and the service of God through the service of His creatures.​"​

Further reflecting on the message Badshah Khan’s life has in our times and context, Easwaran writes:

​"​It is only a matter of time before his special light will begin to shine in many corners of the earth. For his contribution to the legacy of nonviolence has special significance today, when so many countries of the Islamic world are torn by violence. Just as Gandhi reminded Indians of their long-forgotten legacy of truth and non-violence, it has been given to Badshah Khan to perform the same great service for Islam. His life is a perfect mirror of the profound values of love, faith, and selfless service embedded in Islam since its inception. His non-violent ‘army of God’ stands as a beacon to all Muslims who seek an alternative to the self-destructive violence of our times.​"​

“Like Gandhi in Hinduism and Martin Luther King Jr. in Christianity,” Easwaran tells us towards the end of this fascinating book, “Badshah Khan demonstrated conclusively that nonviolence—love in action—is in perfect harmony with [...] Islam.” His “simplicity, deep faith and selfless service represent the Islamic tradition at its purest and most enduring”, Easwaran says. At the same time as Easwaran believes that Badshah Khan’s understanding of Islam is of particular relevance to Muslims today, he indicates that Badshah Khan has a message for the whole of humankind, not just Muslims alone. Thus, he remarks:

​"​But Badshah Khan’s message is scarcely limited to Islam. It can help the non-Muslim world to understand the true greatness of Islam, but more than that, it should help all nations to understand their own potential for love in action. If Badshah Khan could raise a nonviolent army out of a people so steeped in violence as the Pathans, there is no country on earth where it cannot be done.​"​