The Twilight of Atheism: The Rise and Fall of Disbelief in the Modern World

Name of the Book: The Twilight of Atheism: The Rise and Fall of Disbelief in the Modern World 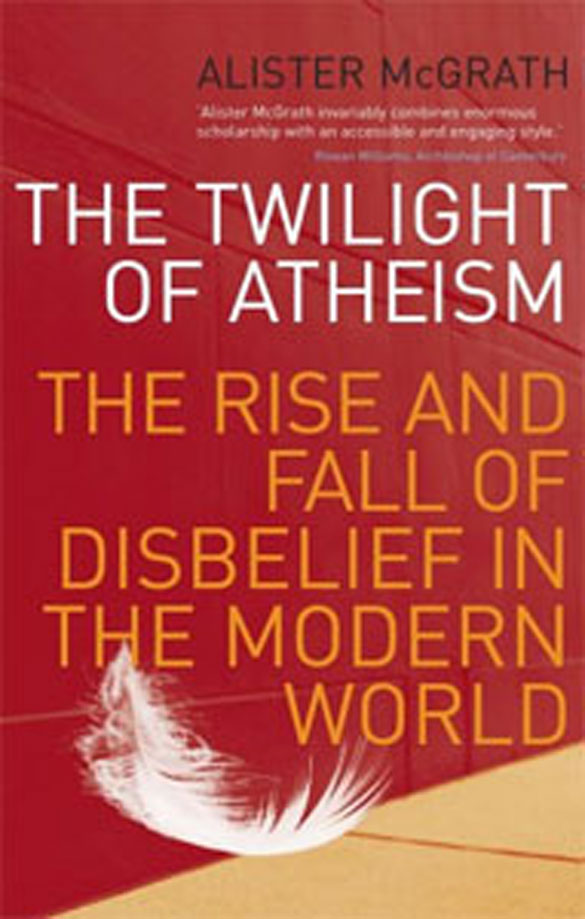 This thought-provoking book by a noted British scholar seeks to explore the roots of the rise of atheism in the world and what it considers to be its visible decline. McGrath refers to atheism as the greatest ‘empire’ of ‘the modern mind’ (which he appears, hopefully unintentionally, equates with the modern Western mind). Attracted by the appeals of atheism, he shows, huge numbers of people in the West rejected belief in all transcendental realities, considering such belief as ridiculous, reactionary, oppressive, manipulative and enslaving. They deemed the rejection of the idea of God as key to human intellectual and spiritual liberation.

The book provides a fascinating account of the author’s understanding of the course of atheism in the modern West over the last few centuries. Drawing on a vast array of writings by Western writers through this period, he identifies several key turning-points in this process. One of these was the growing disenchantment with institutionalised Christianity, the dominant religious system in Europe for centuries.  The power and wealth of the Church began being seen as a scandal. The Church was seen as an agent of exploitation and oppression and its dogmas as holding back social, intellectual and political progress. Along with this, McGrath points out; the rational and historical criticism of the Bible led many Europeans to challenge centuries-old dogmas of the Church, not being able to accept them on rational or humanitarian grounds.

The European ‘Enlightenment’, with its notions of ‘progress’, further exacerbated this opposition to the Church, which over time grew into opposition to all forms of religion and to God and to the very notion of the Transcendent. The French Revolution (1789) gave a boost to this process, leading many of its votaries to imagine that a new world lay ahead, freed of religious restraint, based on reason, and supposedly committed to the liberation of humanity from tyranny and religious superstition. They believed that if one could ‘eliminate’ God, a bright new future for humanity would dawn. Many in Europe warmed to this idea, McGrath shows, tired as they were of institutionalised religion, including for what they regarded as its false dogmas, its support for an oppressive monarchy, and for what was they considered as a corrupt, fraudulent and dishonest priesthood. Growing numbers of Europeans now began to deny Christianity itself. Some expressed faith in God without subscribing to any particular religion, their belief based on reason or nature. They urged for the reconstruction of religion on the basis of the Supreme Being disclosed in nature. Others turned agnostic. Yet others became ardent champions of atheism.

Gradually, McGrath shows, atheism became a dominant worldview in large parts of the West, and he does a masterly job of seeking to explain how this happened. Soon, it was being argued that there was no reason at all to propose a God to explain the ordering of the universe. A host of materialist ideologies began to emerge united in their claim that God was a myth, that religion was imaginary, and that the liberation of humanity lay in ‘science’. Votaries of hedonism, who regarded the purpose of life to simply be ‘enjoyment’, virulently rejected God and religion, regarding them as a barrier to fulfilling what they believed was life’s purpose. They felt that religion and belief in God shackled them and prevented the unrestrained freedom of human beings. Their claim that genuine liberation was only possible by ending belief in God soon won many takers, including vast numbers of people who did not want to be restrained in their actions by moral rules, seeking unfettered freedom for themselves rather than submit to Divine authority. Ideologies such as ‘scientism’ and humanism, and the idea that reason, not faith in unprovable religious beliefs, should guide human actions, further undermined religion in the West. McGrath indicates the role of influential Western thinkers, such as Marx and Freud, who sought to explain away religion and belief in God as supposedly a result of various social, economic or psychological various different factors.

Over time, then, while earlier generations in the West had regarded the existence of God as a natural and fundamental belief, as something that was self-evidently true, many now took a diametrically opposed view. They began claiming that atheism was the natural philosophy of humanity and that it was the beliefs of religious people that required rational explanation. They insisted that belief in God was a form of wishful thinking for consoling weaker and foolish people and for exploiting the poor, or an illusion created by fearful minds to console themselves in the face of what they regarded as the universe’s meaninglessness.

McGrath points out that, contrary to what many had expected, ‘modernization’ did not lead to the evaporation of religion. Restricting himself mainly to some parts of the world where a sizeable number of people claim to be Christians, he points to the phenomenon of a noticeable religious revival, which he takes as an indication of what he regards as the ‘Twilight of Atheism’, and something that he, as a theist who was once an atheist, obviously welcomes.

This book is a well-argued account of the rise of atheism in the modern West (which the author seems to equate with ‘the modern world’, almost all his references being only to that region). Treating the Western experience as representing that of the entire world isn’t quite right, and this constitutes a major limitation of the book. The argument that atheism, once seemingly triumphant, is on the decline in many parts of the world and many of the reasons the book cites for this might be valid—but again, maybe this argument needs to be qualified in terms of geography, this phenomenon not being particularly visible in Europe.

Another point that needs to be considered is that the growing religiosity that McGrath hails as triumphing over atheism need not necessarily mean genuine spirituality. Further, missing in the book’s perhaps too brief appraisal of the religious situation of the contemporary world is the global rise of consumerism as a de facto religion for hundreds of millions of people, including for vast numbers who claim to follow one or the other conventional religion.

Yet, despite these limitations, overall, this book is a very interesting read.